With a forecast giving bright sunshine after rain I was optimistic that I could maybe get some photos, if they didn’t scarper.With the recent cold weather, snow and perpetual grey skies, the sun was more than welcome, you suddenly feel better and the world is a better place.
It obviously affected the pair as well, after a brief bout of hunting from Big Ben by the Falcon, both then retired to sunbathe on the Palace of Westminster.


Arriving just after dawn courtesy of London’s roadwork’s and diversions, I made my way straight to Middle Tower, sure enough the Tiercel was tucked up on the eastern face, even better the Falcon was on top of Big Ben. Pair located, half the battle so I took a few shots, not in great light as yet it has to be said.

I watched in particular the Falcon, the spire on Big Ben is favoured as a hunting perch, I was hopeful of perhaps some pair hunting. After about 20 minutes with no movement 2 Jackdaws came through, I watched them as both were a relatively rare bird in Central London, when I looked back she had gone. Not only that he had gone as well, as mentioned in previous posts this happens to me a lot, you look away for a second and they slip away.
They had not taken after the Jackdaws, not their normal prey, as I would have seen them so I up anchored and went searching for them.

By now the sun was up and clear blue skies were everywhere, I was optimistic; especially if both had gone that they could be with prey on the Abbey, this proved negative. Broadening the search I went into Victoria Park, bingo, both birds in close proximity on the east facing corner.
It soon became evident after 30 minutes that both, if they had been hunting had packed up and had decided to preen and sunbathe. It gave me an opportunity to take a few photos of them in situ, I then settled down to wait them out. The position they were in would hopefully give me some good shots as they flew, as they say the best laid plans… 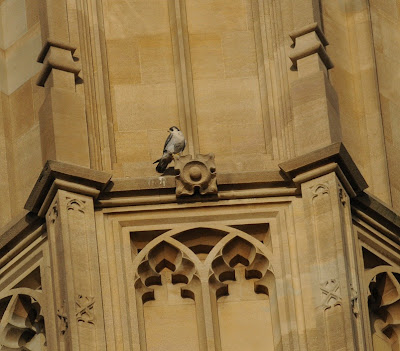 After an hour when both had stopped preening and the Tiercel started to call and move around, I thought he is going to go and got the camera on him ready. As I did out of the corner of the other eye she went, tried to get on her, failed miserably, swung back to see him going away also, missed him as well.
Cocked the shots up completely, I would like to say it was the Lens not being quick enough to focus but more like me not being quick enough.

After a short while both came back and settled on Middle Tower, I left them to it, a good morning and quite enjoyable just watching behaviour, like me they were enjoying the weather.

Posted by Dave Morrison at 06:58 No comments:

Where are they now?

The breeding season of 2012 gave us a good number of ringed juveniles, all wearing the standard BTO ring on their right leg with an orange band on their left leg denoting London born and bred.
If this colour was only used for London it would be easier, as it stands the colour orange is widely used all over the UK.
As there Latin names means “wandering or pilgrim Falcon” this implies that they travel, not only as a migrant but home grown juveniles will stretch their horizons as well. If this happens and a London juvenile carrying an orange ring enters another city where other juveniles have bred and carry orange rings also, it will give you some confusion unless you can read the numerals. Of course this will only happen after dispersal, say September/October onwards. To read the numerals you do need a telescope, notwithstanding that, juveniles usually allow a closer approach for binoculars until they get that wildness of an adult bird.

Thankfully plans and rings are now afoot this year for some London colour ringed juveniles to be given a London colour, dark green with white numerals, this hopefully will give us the info we need as long as ringing recoveries take place in the future.


When the juveniles disperse and make their own way in the world, will they make straight for an urban area as per there natal site? I have often wondered where they end up; ringing recoveries for London juveniles are very low, why? As a high profile bird that has a tendency to ‘profile’ perch on structures/buildings/pylons etc... we should be seeing more juveniles/immatures around the outskirts of London, ringed or unringed unless, as per above, are they are going straight out of town due to London’s density?
Mortality used to hover around the 30% mark but with milder winters and an abundant winter food source – surely the figure may well be lower now.

The London Natural History Society Boundary, a 20 mile radius from St. Pauls Cathedral is well manned with abundant birdwatchers; juvenile/immature ringed or unringed peregrines should be on the radar more often and being seen more. I know of a few immatures around but nowhere near the juvenile/immature numbers that I know exist.
As far as I am aware only 3 immature ringing recoveries have taken place over the last 2 years from London, there was also another bird located out in Essex last year if I remember correctly.
If they are not being seen, are they living up to their Latin name and wandering a lot further afield, or could some even go continental? There is no evidence of this; in truth I can’t see this happening.

Who knows, it could be that many immatures will hold to a coastal/rural food source/area as they are not strong enough to hold a territory of their own in the City or outskirts, this will mainly apply to the Tiercels.Once adult plumage is attained will they then try and move back to somewhere that resembles there natal site, or do they move sooner?
I know and have watched a number of sites in London that pretty regularly have their pairing tested, be it by an adult or immature, are these birds that are coming in from the outer counties or even further afield?

Myself and my colleagues at the LPP know where most of the London pairings are, the gaps between pairs don’t seem to be occupied by many singles or immatures, so to me that can only mean that most are going straight out of London.

New colour rings will give us good information…as long as they can be relocated.

I recently saw the earliest copulation I have seen in peregrines, December 23rd no doubt brought on by the recent mild weather, needless to say its bloody cold at the moment.
On Monday I cleaned this pairs box out in preparation for the 2013 breeding season, and additionally I wanted to make sure the box was clean and hopefully parasite free if they laid early.

On arrival at the box I found that the Falcon had already made a good scrape so unless this cold weather puts the eggs on hold, there is the possibility that they may lay early. Boxes don’t get washed out naturally by the weather hence the annual substrate change.

Below shows the box before and after, firstly as it was with the scrape made by the Falcon, and then with fresh substrate and a new scrape made by myself.

I visited on Sunday January 6th in the usual overcast grey murky skies, more so as it was foggy so I was not expecting great photos for the morning, after the last few visits I would be happy just to see and get good views of the peregrines at Parliament.

Arriving at dawn I checked all over Victoria Tower to no end, they were not on it, so I checked the Abbey, again I drew a blank and returned to Parliament. The time now was 8.17am and I was beginning to think they are not here so I did another scan and found them, they were both on Middle Tower and tucked away so well in the murk I had overlooked them.


I decided I would get a better view from the bridge, they were round the side of the Tower so I walked round, Sod’s Law I got round there and they had both gone, this happens a lot to me, I move when I should just stand and wait.
I returned and hung around the square and shortly later I got a brief view of the Falcon at 8.36am heading for Westminster Abbey‘s wide ledges with prey, I located her and then went into the Abbey Gardens to get a better view.
I found the Falcon feeding with the Tiercel patiently waiting nearby, the position both were in was ideal for photos, just a pity that the weather was so foul.
Prey was a feral pigeon and after a while the Tiercel started to make a bit of noise to hurry her up, no doubt he was hungry but such is the domination of the Falcon she was not going to share it until she had completely filled her crop. 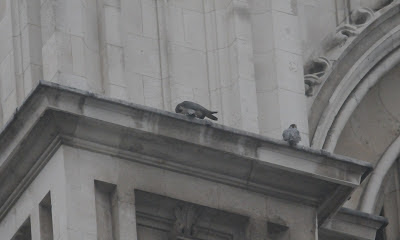 I managed to take some video showing the Falcon finishing feeding and the Tiercel trying to get past her to the prey; it also shows how awkward they look when they run around on their talons, at times comical. As yet I have not sussed out how to post video on the blog but hope too soon.

Whilst watching them I also attracted the attention of 2 American ladies, looking through the binoculars and telescope they really enjoyed the pair and watched for a good while, very nice people and good to spread the Gospel.

At 9.20am the Falcon let the Tiercel past and he settled down to feed, I then made my way to Victoria Gardens Park ,I was hoping that she would come over and lay up, better grey light so to speak, unfortunately she stayed on the Abbey and that was that.

She was still in this position when I left around 10.00am, a good visit and great to see them present.