As I have mentioned before I am not getting to Parliament as much as I would like to, other commitments and especially the weather have marked the number of visits this year.
With all the gear needed, Bin’s, Camera and Telescope it has to be by car which means weekends visits otherwise it’s a case of a weekday congestion charge visit.
On top of that during the week , outside of Parliament it is very busy as you can imagine, also having to pay to park around Westminster can be an expensive exercise, in short it would cost a few bob for a weekday visit.

Last Saturday I at last got a chance to catch up on the pair and hopefully the 2 juveniles, arriving at my usual time around 5.30am.

Located both adults at roost on Victoria Tower, they soon emerged and took up station to hunt, the Falcon went to Big Ben and the Tiercel disappeared, possibly to a favoured hunting area.

I positioned myself on Westminster Bridge and waited for the Falcon to begin hunting, light at that time was not great but was getting better all the time.
There is one shot that I have been trying to get for a good few years, that is of one of the peregrines speeding past the London Eye after prey. All depends on the direction of the hunt and location of the prey, also my lens – F4 300mm is not really man enough for the job. The reach is better with a 1.4x convertor on but trying to keep a lock on a speeding peregrine, in not so good light can be very frustrating, it just won’t lock.
I have got one of the Falcon going past the Eye but it was far too distant and taken from a lot further away. 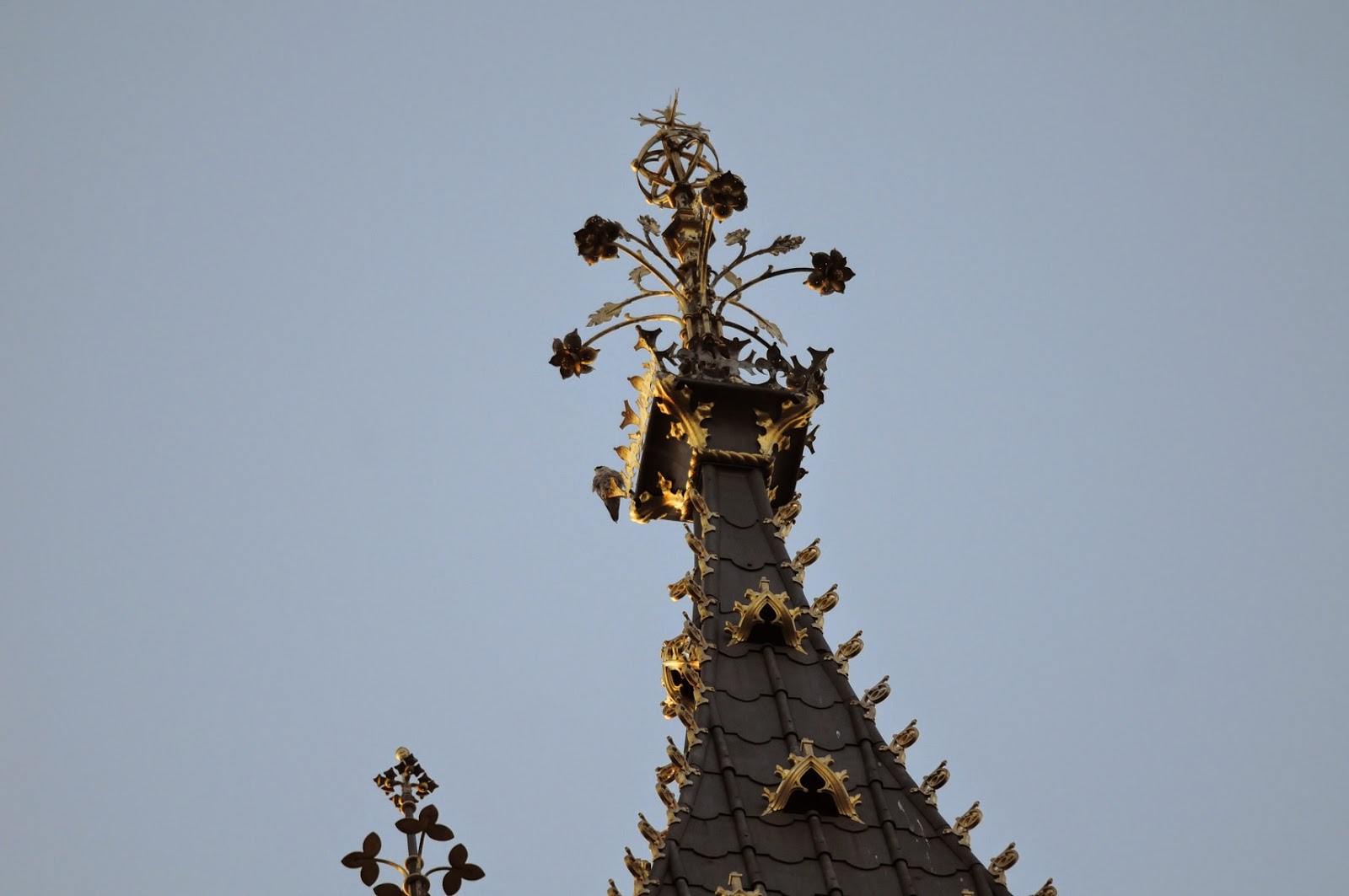 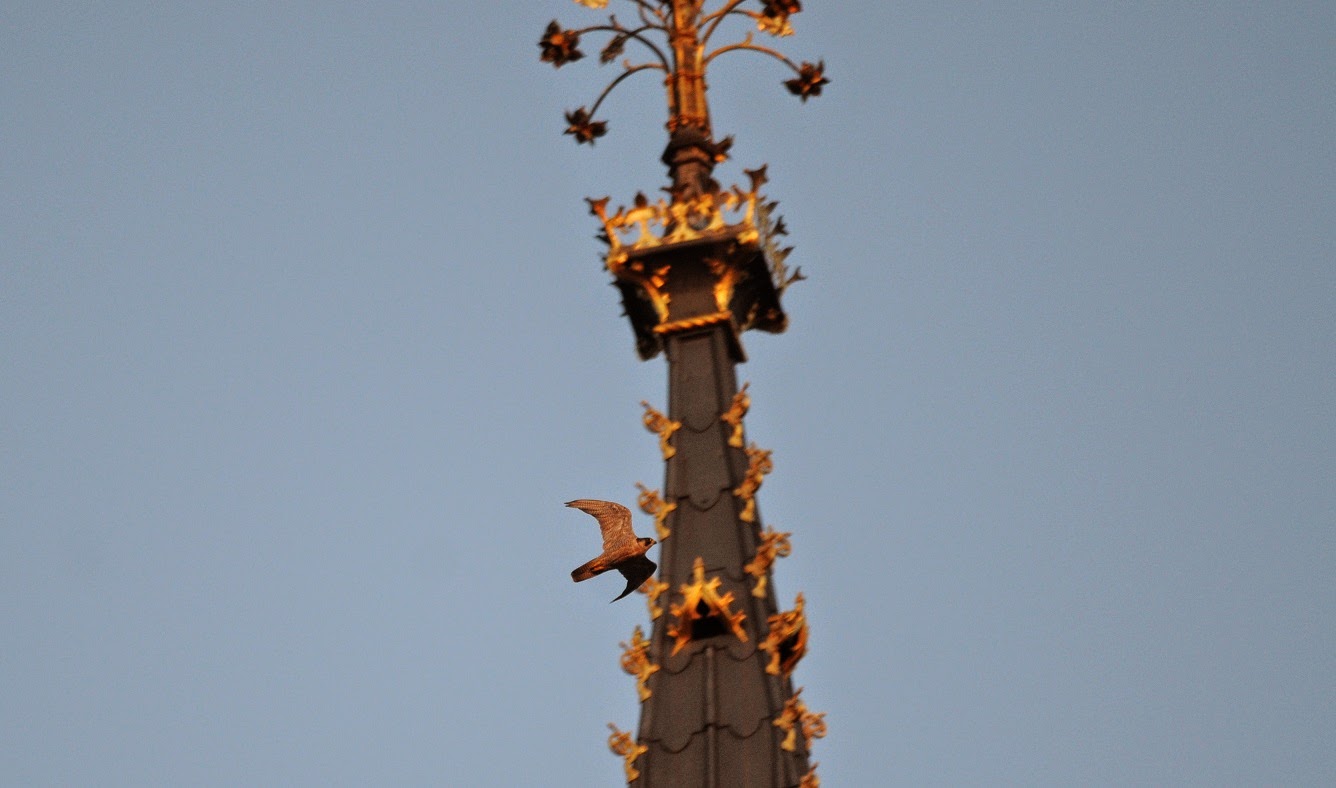 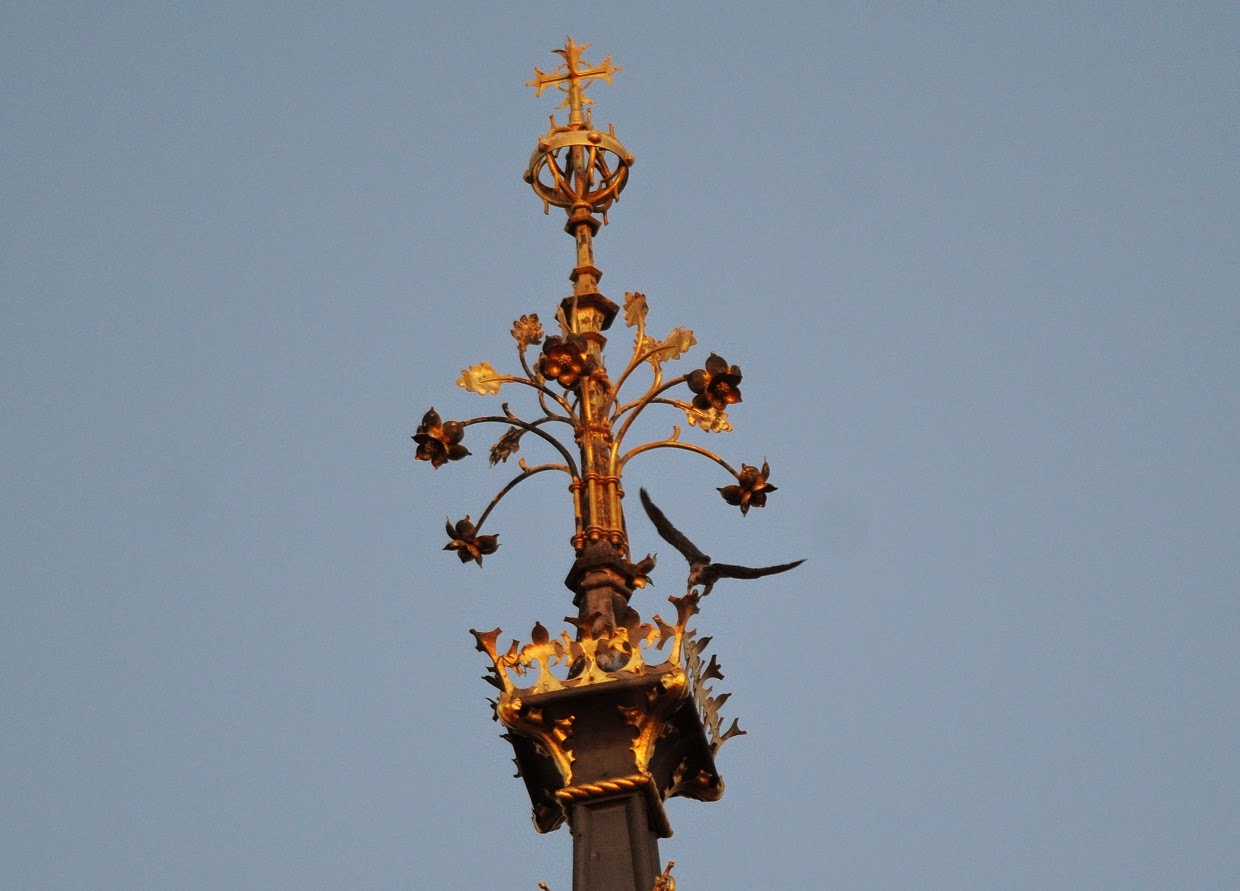 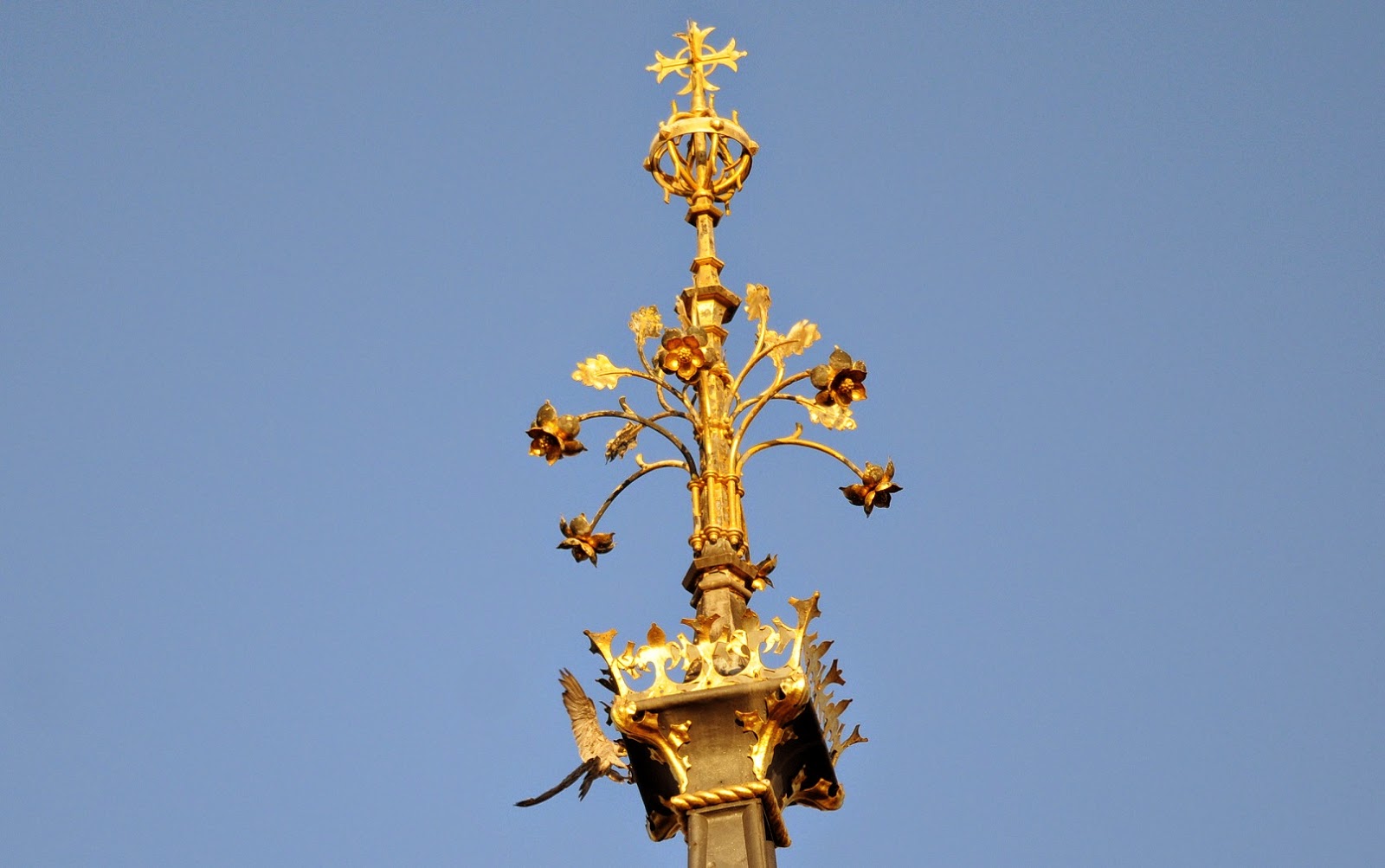 Anyway it didn’t matter as all of her hunts went north or west, the bridge is east of Big Ben so the hoped for shot never materialised, also no prey was taken.
Of the Tiercel there was no sign during this time, possibly having taken prey for himself and feeding on some distant building rather than carry it back.

As for the juveniles not a sign either so they could possibly have gone, it looks that way, with earlier breeding in London it seems earlier dispersal as well.

I also met a very nice couple taking their wedding photos in the morning, prior to their wedding, on Westminster Bridge against the backdrop of Big Ben and Parliament. 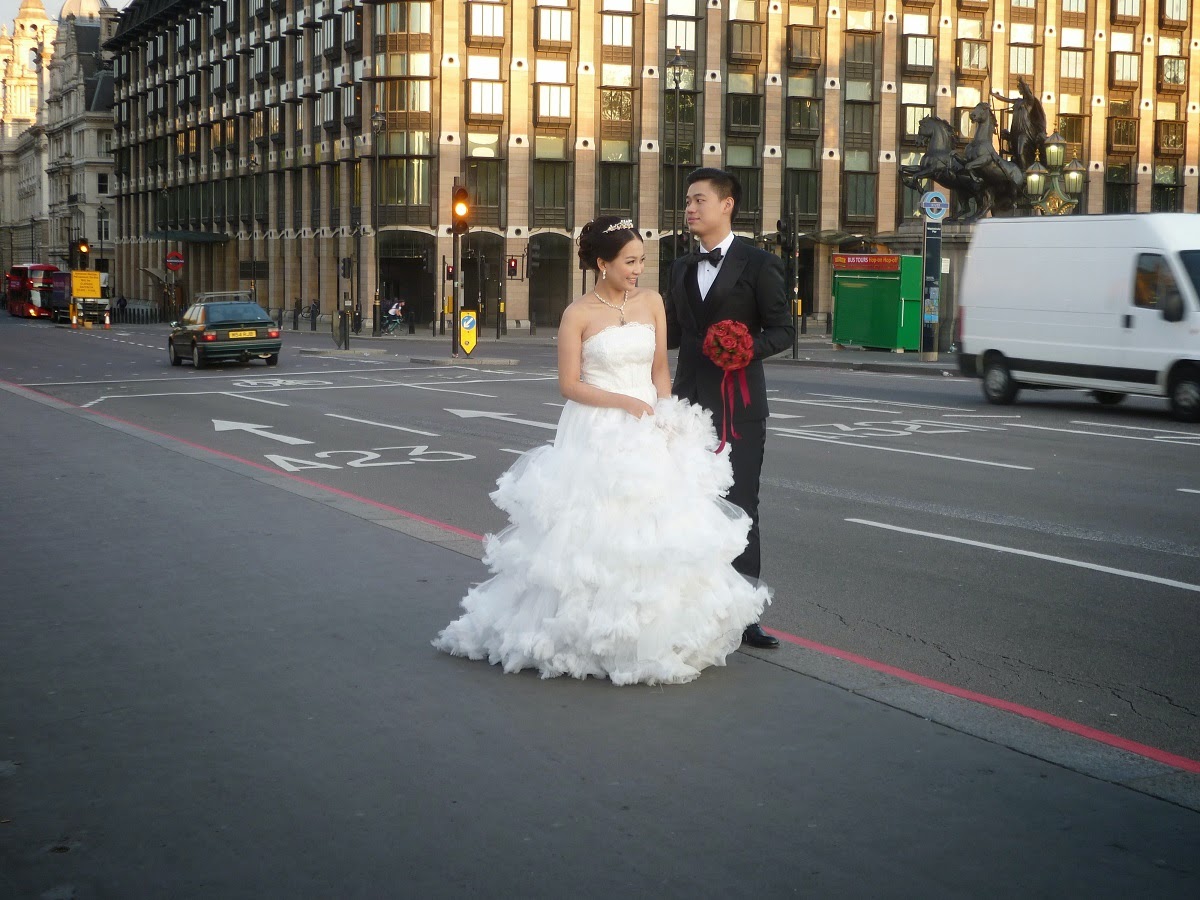 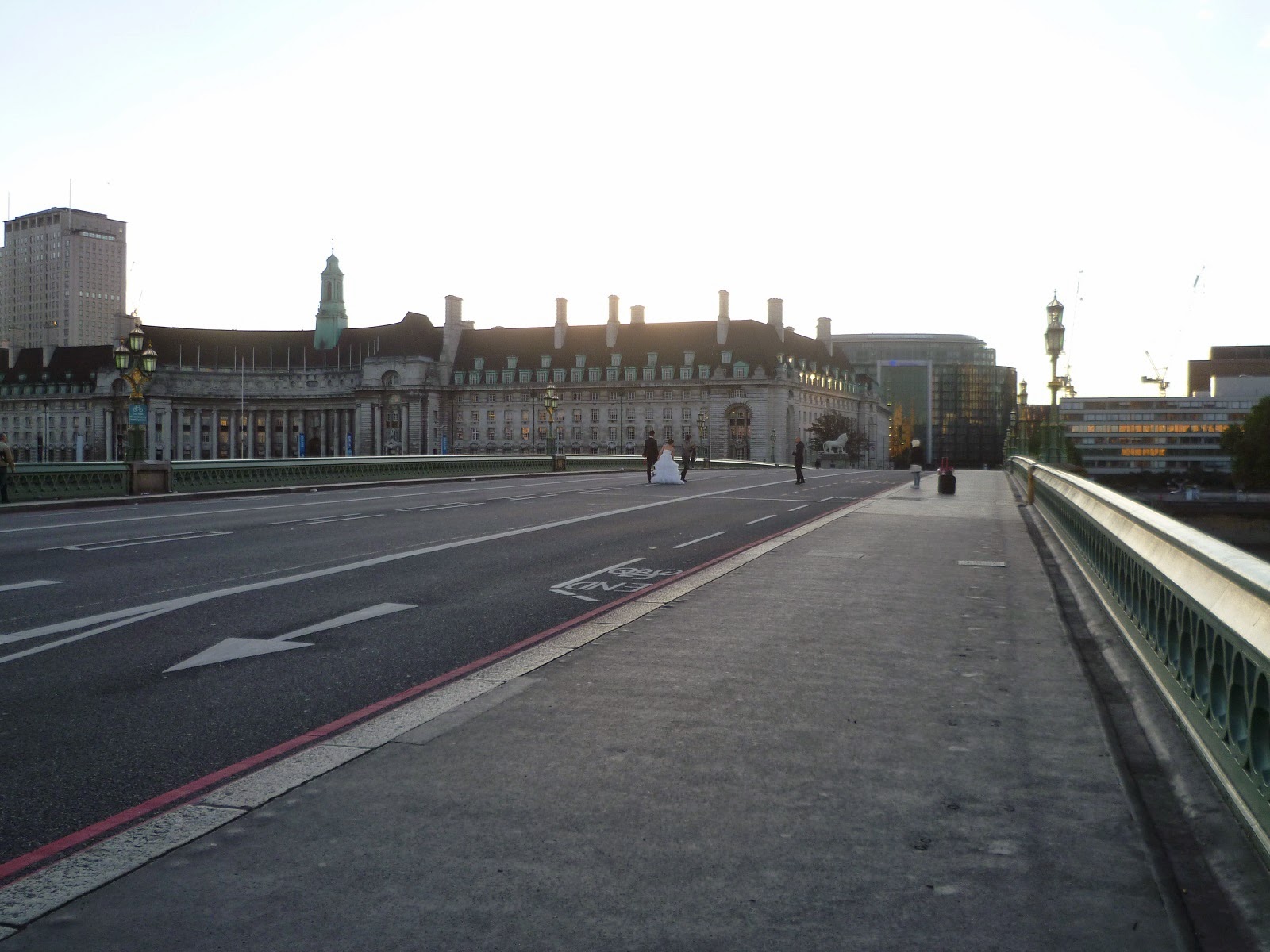 If you read this, all the best, congratulations and the very best of luck for the future.

Have just returned back home after a short but hugely enjoyable 3 days in Brixham, myself and Christine have always enjoyed the County and try and get here as much as we can.
Port of call has always been Brixham, the fish restaurants are a must and if you go there, I can recommend Simply Fish in the Harbour, the fish and chips is out of this world.

Of course I got out for a few hours here and there and walked the cliffs and fields and kept an eye open for Cirl Buntings, not a bird I see a lot but I have had them on the coastal paths in past years. I know there are certain areas I could drive to see them and they are more or less guaranteed but this was just casual birding and walking.

Chiffchaffs seemed to be everywhere on the coastal paths and looking out to sea produced numbers of passing Gannets and also pretty close Harbour Porpoises, Fulmars as well were pretty active including some with full grown young.
I watched one adult repeatedly passing the nest site close trying to lure the juvenile out but he or she was having none of it, like kids they will walk when they’re ready. 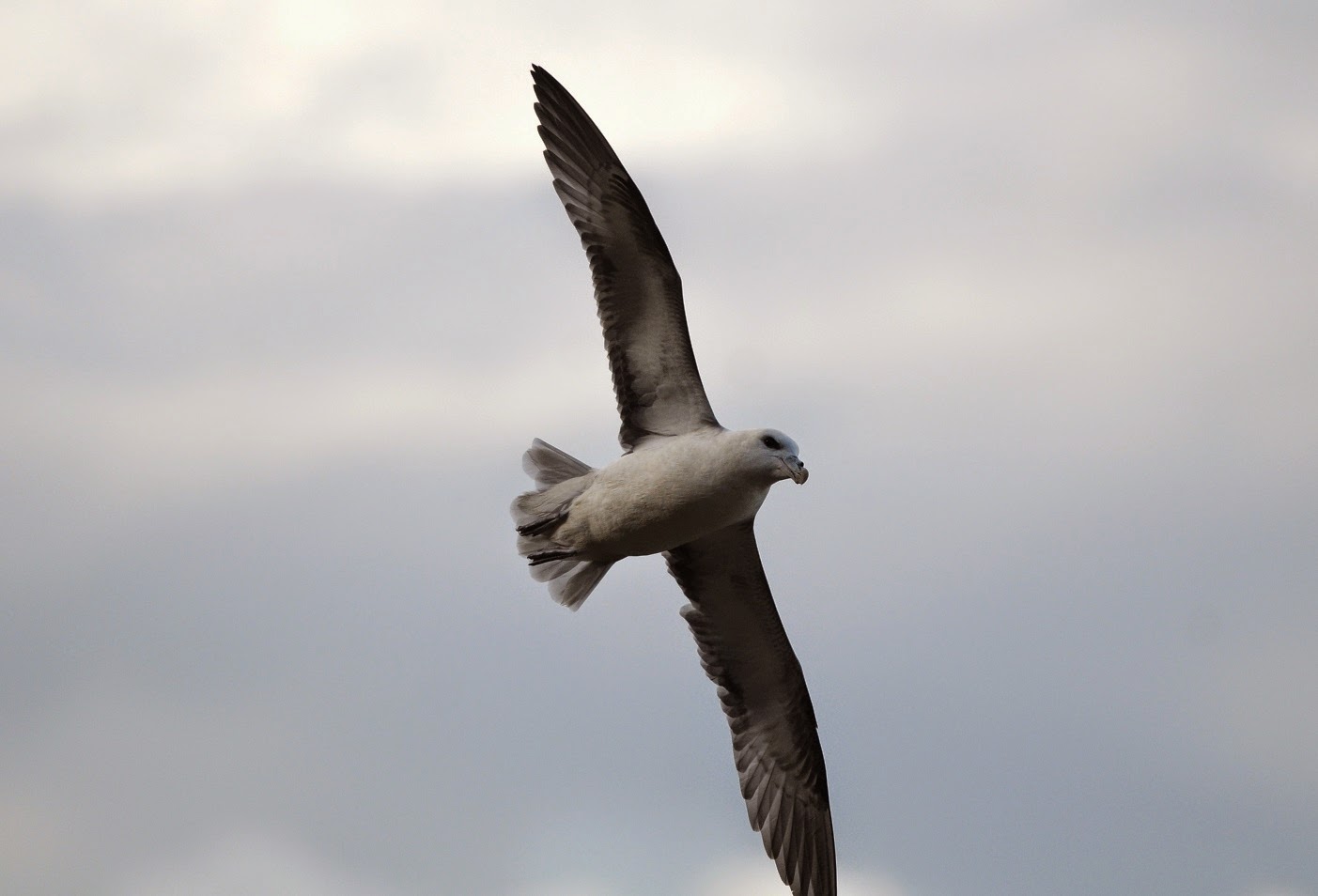 Although only grabbing a couple of hours each day, It was inevitable that I would see Peregrines, a Tiercel one morning hunting low over the fields, not on anything but looking like he was trying to flush something and a nice female on another day. 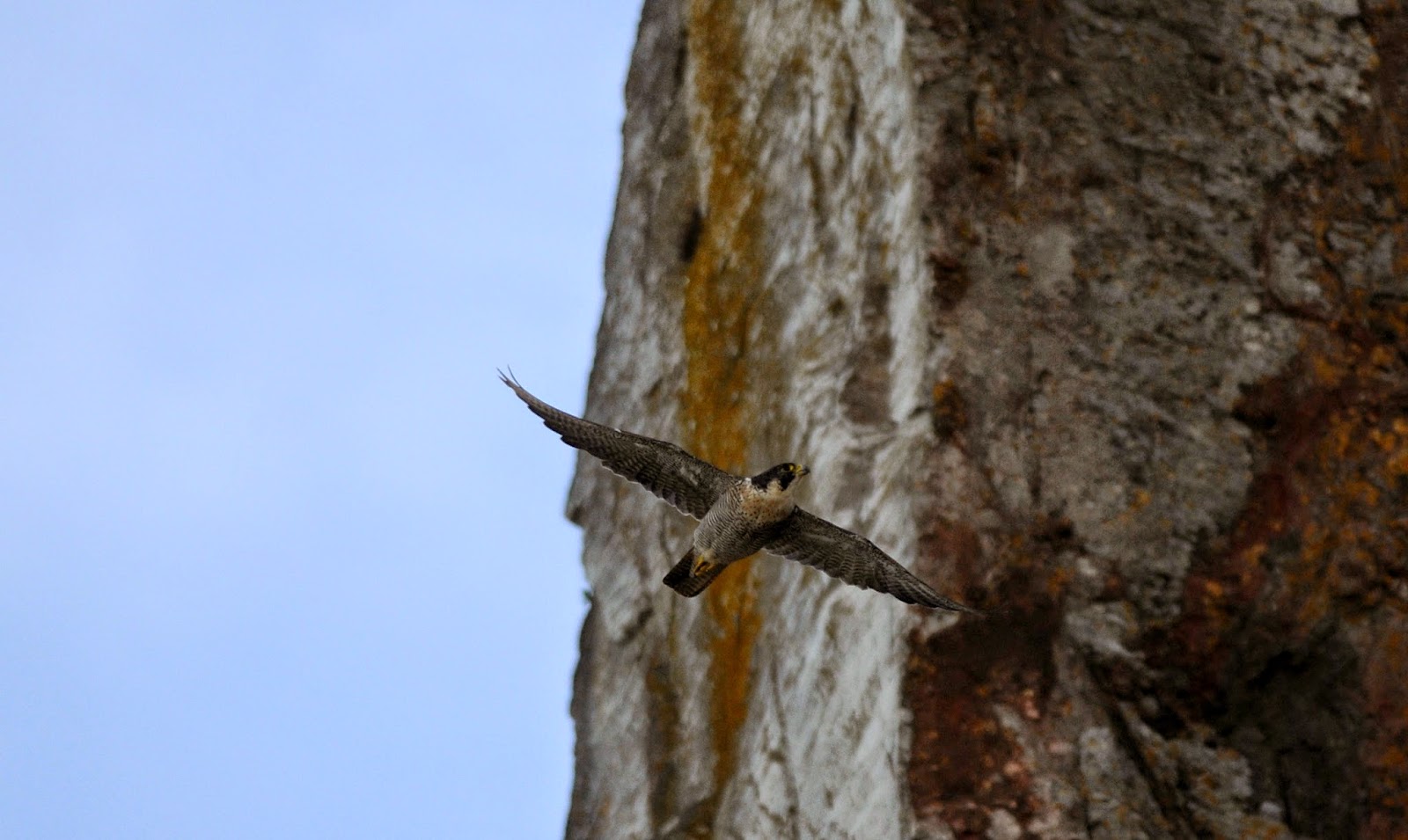 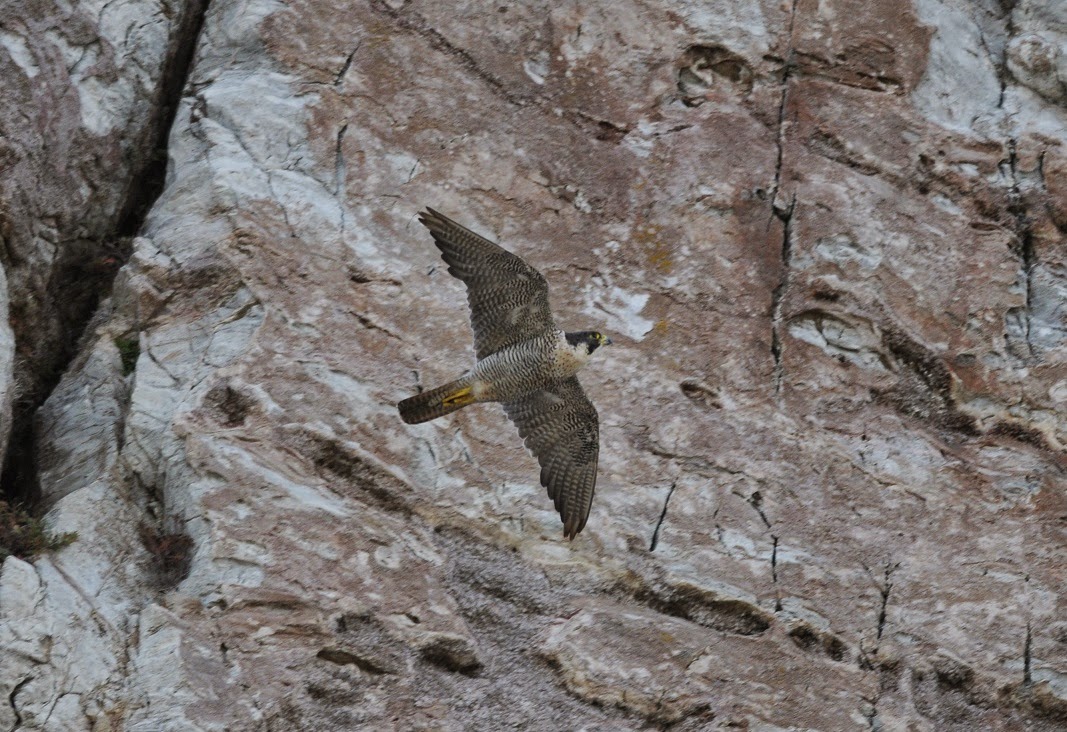 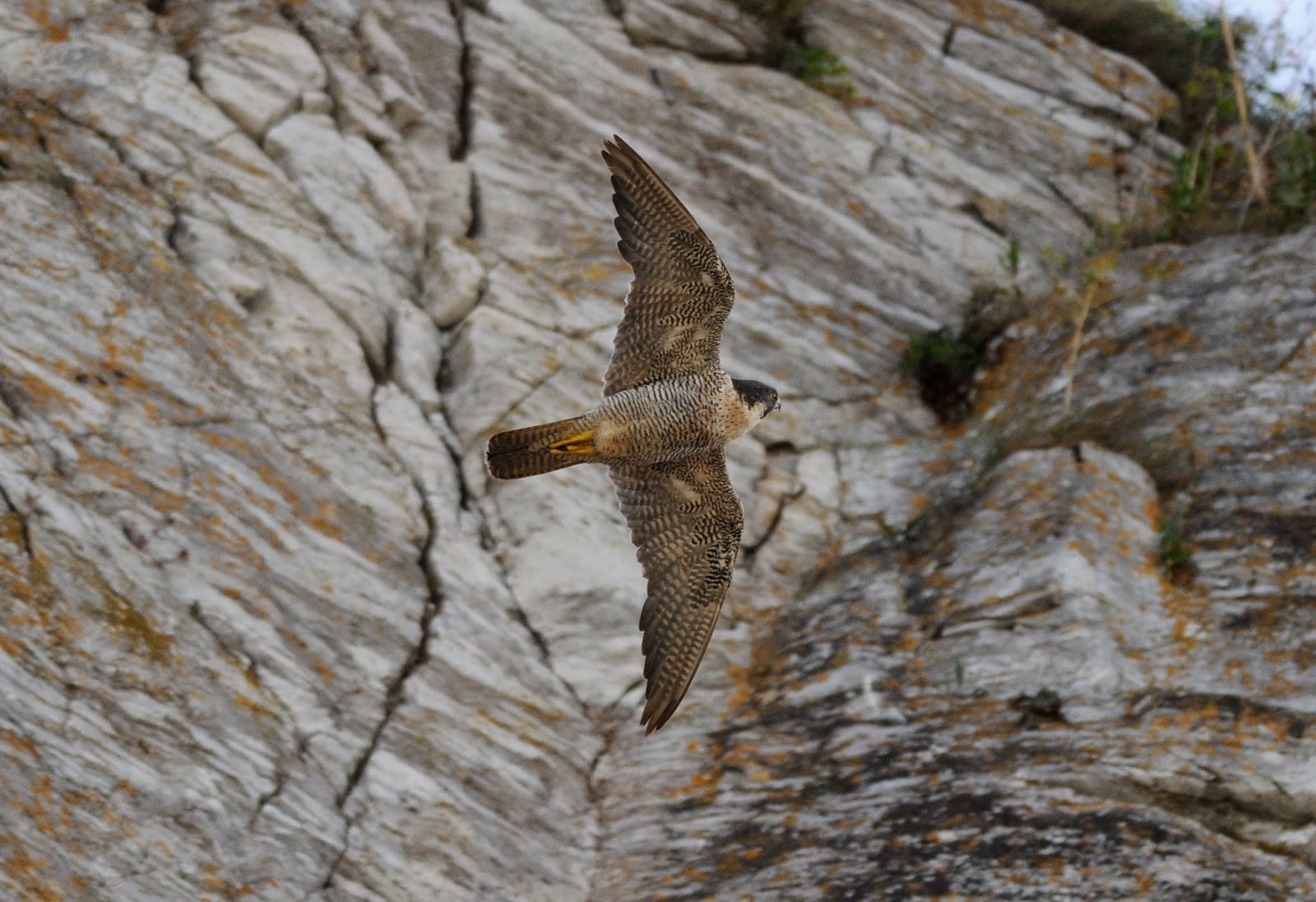 We also discovered Dartmouth, I cannot believe we have been coming down here for all these years and have not visited it, needless to say we were hooked straight away, even saw a Peregrine and 2 Common Buzzards high over head.

All in all though a very enjoyable couple of days, good weather and good food, you can’t ask for much else can you?
Good also to make the acquaintance of Stephen Watson in Totnes, a fellow peregrine man, good to meet you,hope to see you again one day at Symonds Yat.


Following on from Battersea Power Station – early days July 8th, the owners at the time – Parkview International were going to proceed with redeveloping the Power Station after years of the site lying dormant.
With the peregrines firmly established in 2004 and holding to the site 24/7 365 days a year ideas were needed to try get the peregrines to nest elsewhere on the site; it was imperative that they stayed but not on or in the Power Station itself.

Meetings were scheduled and I attended with Colin Shawyer, who at the time I believe was working for the Hawk and Owl Trust. From this we discussed a tower designed specifically for the peregrines. An idea was arrived at and the vertical section of a tower crane was installed in the North West corner with the now older type Hawk and Owl box positioned around 6 metres from the top.

Although both peregrines took to it, prey was stashed in it, the falcon rested/roosted in it, in regard to breeding it never happened for 2004, that year they failed after laying in a position where they were washed out on the Power Station by rainfall. This came from bad nest site location on the falcon’s part, there was heavy rainfall and the nest scrape became waterlogged and chilled the eggs.

2005 arrived and I had high hopes for the tower, activity was non-stop on it including copulation but true to form they went back on the Power Station, this year however they were successful, they fledged 3 juveniles. It looked like they had learnt from the previous year and they laid in a more ideal position, although due to their Schedule 1 status restrictions as to disturbance had to be put in place. The tower had been ignored as a nest site, there were quite simply too many locations and potential ‘scrapes’ on the Power Station, they wanted to be on it so why move?

Due also to the non- acceptance in breeding terms of the tower, it was decided to place a couple of nest boxes on the East Wall, the idea being to get them off the northern sector which they favoured. Work needed to be started in this sector asap.
In November/December 2005 a couple of boxes were placed along the wall ready for 2006, the pair took to them as much as they used the tower, would they prove successful?

2006 dawned and as part of the mitigation measures various potential ‘scrapes’ were closed off with ply etc.., the idea being to steer them towards the tower or the East Wall nest boxes, I watched and waited.

Trust me, trying to outsmart peregrines is not easy, anyone involved with them will tell you that they can be totally unpredictable, in the famous man’s words – Dick Treleaven, “Unfortunately peregrines never read the script”.

Unfortunately they again found a location on the northern end of the Power Station but not being ideal the eggs rolled and they failed quite early.
The lure of the Power Station was simply too strong, egg rolling and even having a nest site washed out by weather is all part of the natural process facing rural pairs. Urban pairs are no different and if anything have many more hazards to contend with.

2007 came with a bang, Sod’s law and they laid 3 eggs in the Tower and fledged 3 juveniles, like I said, unpredictable. Everyone let out a sigh of relief, they were off the Power Station and in there penthouse tower, they would now breed in it year after year, like the great man said, they never read the script. 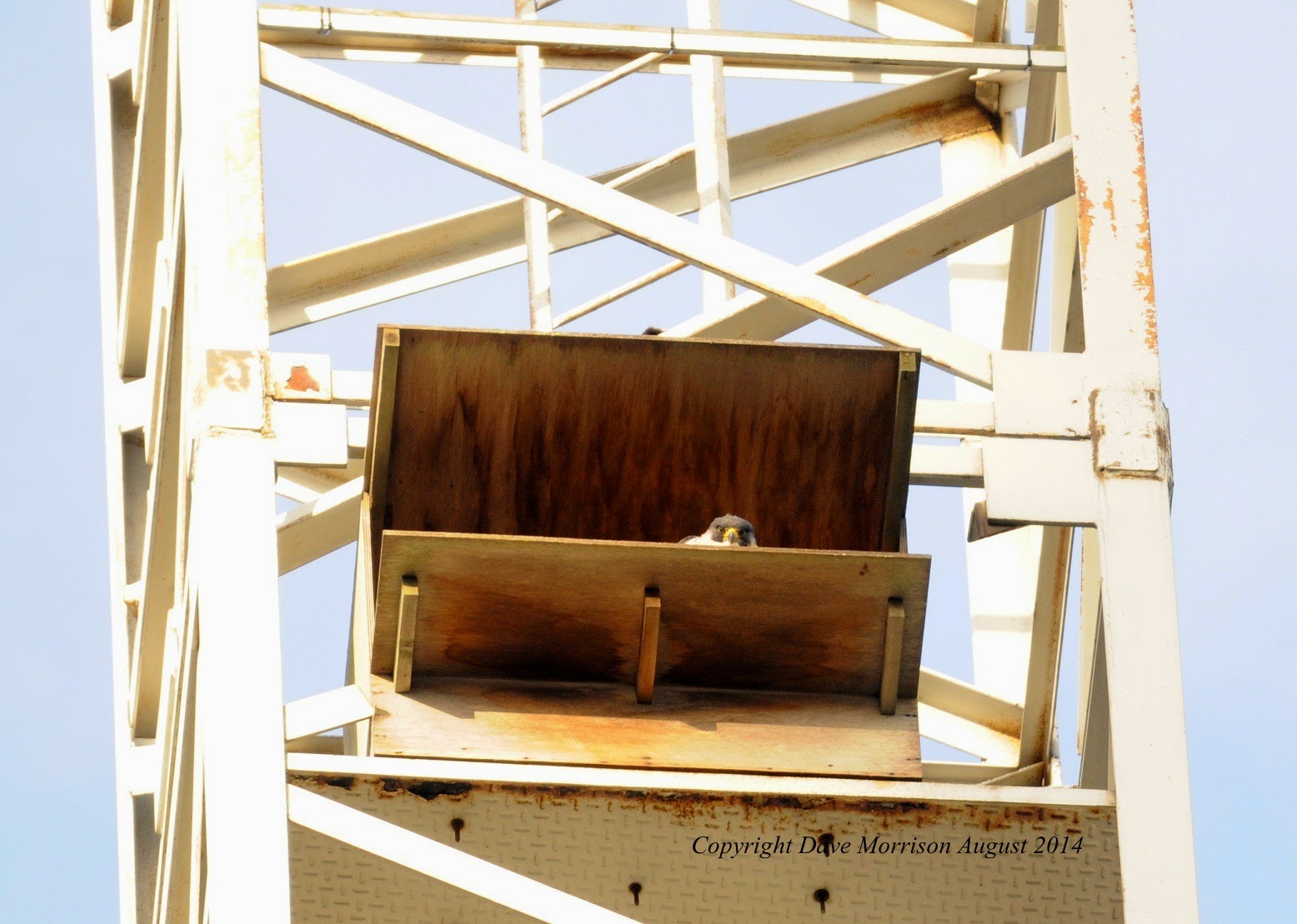 Posted by Dave Morrison at 16:12 No comments: 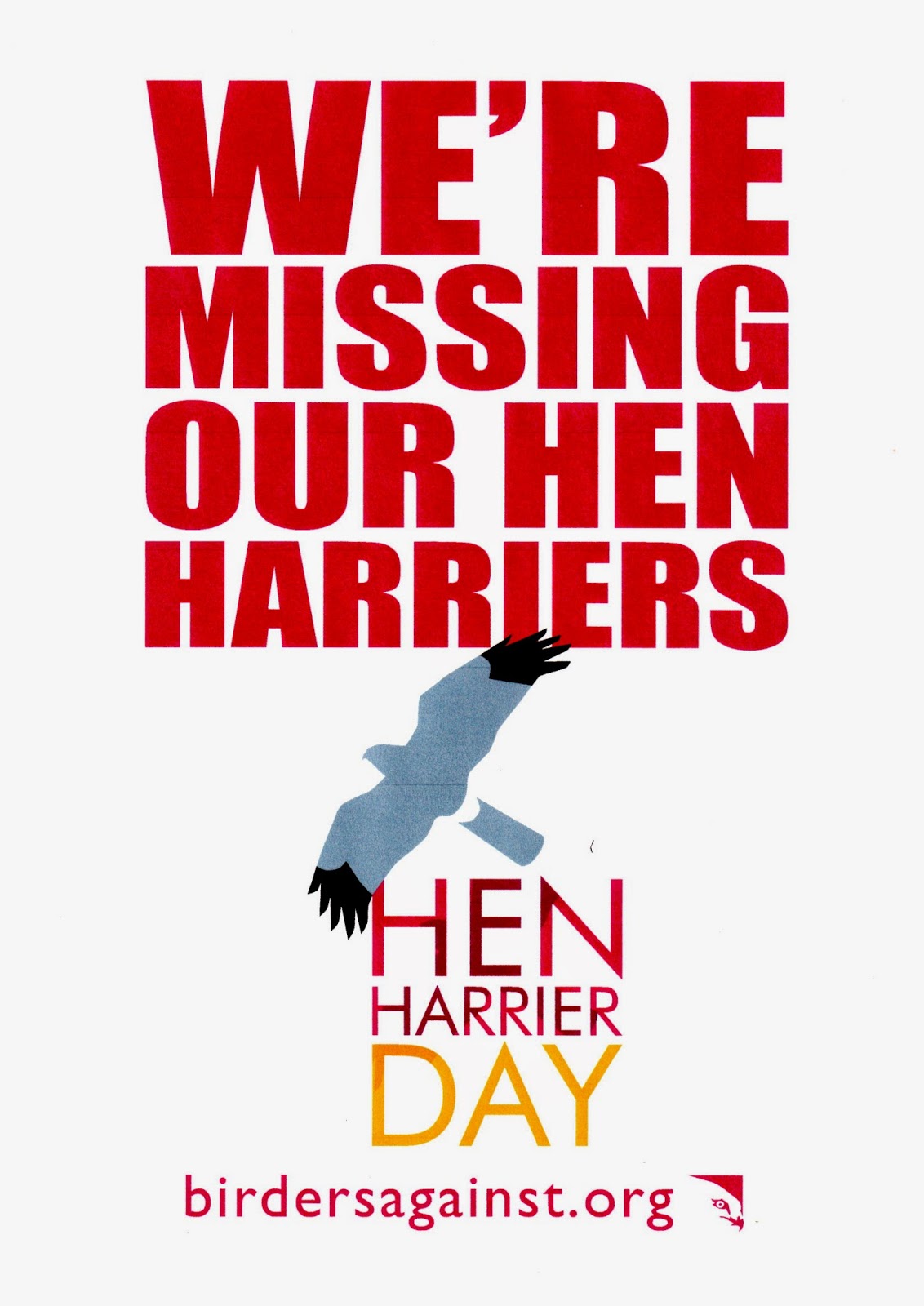 Sunday August 10th is the day, if you haven't signed up please do, every signature helps in the fight against persecution.3 breeding pairs in England is a disgrace, Grouse shooting along with the persecution has to stop.

Posted by Dave Morrison at 10:37 No comments: