Since returning from Spain last Sunday I have been out and about checking on the peregrine sites that I monitor. With all the recent bad weather it was likely that some would fail, sadly this proved true unfortunately. The exposed sites succumbed to the relentless rain and winds and goes to prove the case for a nestbox, it is no coincidence that the successful sites had boxes or trays or were covered by some part of a structure.
Having an insight into the webcam at Charring X both inside and out shows the extremities that Peregrines have to deal with, I know this is true of other species as well but very few will lay eggs in such exposed positions with little or no nest site drainage. The fact that they will just make a scrape in a ½ of dirt is always going to be perilous with egg chilling/rolling a constant threat in bad weather.
It also make you realise just how many nests, not only peregrines but other birds as well, which must have been lost to the weather.
Tragically Nottingham lost 3 of its 4 chicks this year, the weather played a big part again unfortunately; it was also not helped by the Tiercels disappearance for a day. 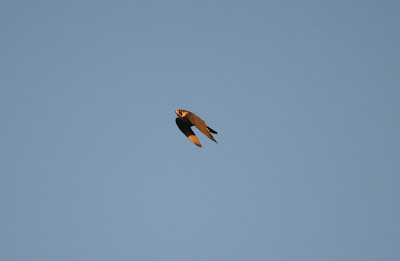 So far this year of the ones that I keep an eye on, 2 have been lost to bad weather with 2 others moving site for one reason or another; plans are already afoot to give each of the failures a nestbox. Of the other 2 I simply cannot find them, both have moved from their traditional nest sites, and with a 2 mile or more radius for their territory they can be hard to find. Hopefully they will come to light.
I have not commented on the Parliament pair for a while, but after a visit this morning at their breeding site, I can confirm that they have chicks judging by the adult’s behaviour. I will be visiting the site for another look on Tuesday. 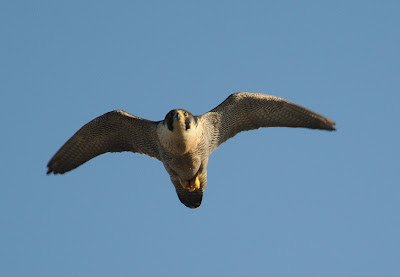 With all the warmer weather earlier in the year it appears that not only did Charring X lay there 1st egg early(March 14th) but another site also did, this site’s chick are even more advanced than the CH X juveniles and I would age them at around 3 weeks.
If this is the norm for this year in the south and London, it could be that the Parliament birds may well have followed fashion, we will see on Tuesday.

Posted by Dave Morrison at 11:00 No comments:


I attended the London Wild Bird Watch Live event on the date above being held at Barnes Wetland Centre, Simon King and Kate Humble were hosting and going live to a number of web cams during the show.They really did put on a great show and hopefully it will be repeated next year. One webcam which I have been involved in was the Charring X Peregrines having made and placed the nestbox.The whole event involving the installation, a new camera was fitted, was undertaken before the breeding season, below is a series of photos taken by Nathalie showing some of the work involved.

4 eggs were laid in it; unfortunately 1 was lost to what appears to be a clumsy Tiercel but the remaining 3 all hatched on the 24th despite our atrocious weather at the moment. The broken egg itself was taken out of the box and eaten by the Falcon. Peregrines are pretty bullet proof when it comes to the weather and will deal with most extremities, having said that I think a nestbox gives them and the juveniles especially an easier time of it in our climate. I don’t always place a nestbox, if a structure has a ‘natural’ roof over it, a tray is sufficient.
As I write this I am watching the Tiercel having just relieved the Falcon (see weekend March 17th/18th for the web cam address), he in particular is very clumsy with his feet, little surprise that he smashed an egg. The pair have now become celebrities in London and are being followed not only on CCTV but also Twitter and elsewhere, the images portrayed by the HD software have been stunning.

Nathalie Mahieu has been monitoring them night and day http://fabperegrines.blogspot.co.uk/ most of the cracking video footage on the balcony comes from the time she puts in, it is a big commitment and well done to her.Without her enthusiasm and hard work the pair would likely still be getting washed out on the balcony every year.
With all the recent bad weather the pairs without a roof or nestbox are having a hard time of it along with all other species, many will be lost unfortunately, the Nottingham Peregrine site I understand has sadly lost 2 chicks to exposure.
One of the chicks at Charring X is weaker and smaller than its siblings and is not always getting fed unfortunately; it has been like this for a number of days now and seemingly does not always have the strength to lift its head. He/she appears to be a little fighter and is hanging on in there at the moment and is occasionally getting fed, it is enough to keep it going, the little chap deserves to make it.

Posted by Dave Morrison at 02:26 No comments: