Back at last!
From past posts you will know that the pair have stayed faithful to their nest site despite failing relatively early, I for one was surprised that they didn’t return earlier to Parliament. My thinking at the time was that there has been a change of Falcon due to her ignoring the nest tray, and subsequently failing due to poor site selection.


Why change position after 3 successful breeding seasons in the nest tray and the same spot?
Very odd, disturbance is not an issue as far as I know so you can understand the thinking of – a new bird, new idea’s. 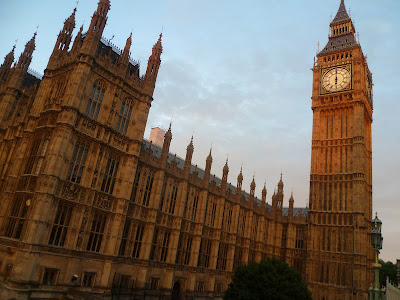 Retracing my steps back round to Victoria Tower and I could immediately hear a peregrine calling, the agitated stress call of a Tiercel waiting on prey and so it proved, the Falcon was feeding.
I have been back to Parliament a number of times over the last few months so it was good to see them back at last, as I have said before photography is not ideal at their nest site so more than happy to be able to try and get a few shots of them at Parliament. 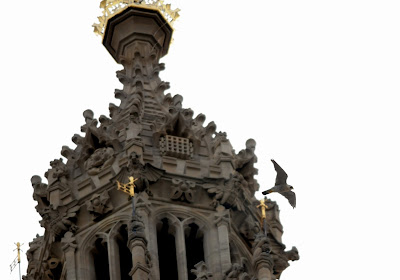 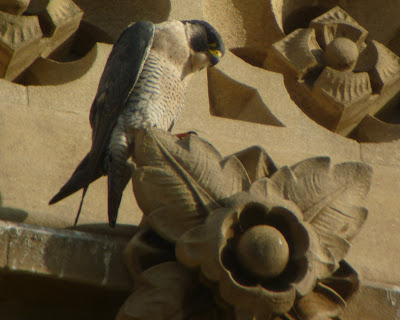 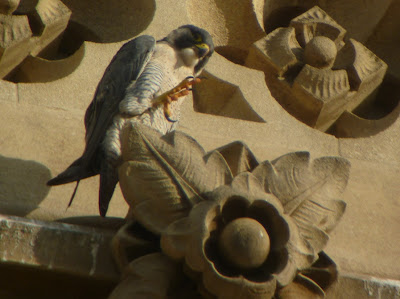 I watched them for a good few hours throughout the early morning, initially the Falcon fed, then the prey was relinquished to the Tiercel, both then laid up to rest. Realising that was it for the morning I went in search of the Hybrids…..

Posted by Dave Morrison at 21:27 No comments:

The other morning I spent 3 hours searching for the 2 hybrids after John Archer quite recently saw them, they were together again on July 19th over East India Dock Basin as per his entry in the London Wiki. It is without doubt them and the fact that they are still together is very interesting, they have bonded and are no doubt a pairing. Finding them is another matter, I know where to look north of the river, but unless the dynamic duo are holding to a territory, and this may be the case, it is very hard to locate them.

Saying that, and as I have said before, she is very hard to miss due to her size and colour. So where are they and if not territorial how far are they ranging, also the fact that they disappeared bang on breeding time, did they try and breed?
More questions lead to more questions, If there ranging far and wide why are they not being picked up by birders, my thoughts are that they are holding to a south of the river site.
If anyone see's these bird(s) I would appreciate a comment or you can contact me directly on
wwwlondonperegrines.com

One of the sites that I monitor this year fledged 4 juveniles, a good brood, this is the site where the same juvenile grounded twice,’ AL’ see Friday 14th June – Catching up…again.
Of this brood 3 remain, 2 have been identified as ‘AD' and possibly  'AJ' with the 3rd as yet still not identified, is it AL? If it is not maybe he rode his luck too much, unfortunately there will always be casualties as I have said before but by and large it has been a good season for the pairs that I monitor.

Below are some photos taken by Paul Hawkins and Les Harrison of 2 of the juveniles, fingers crossed they get through their first winter. 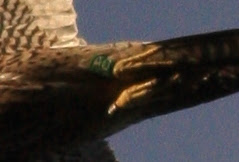 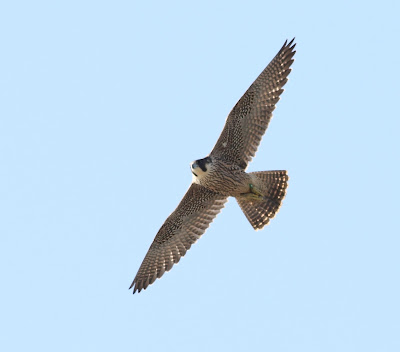 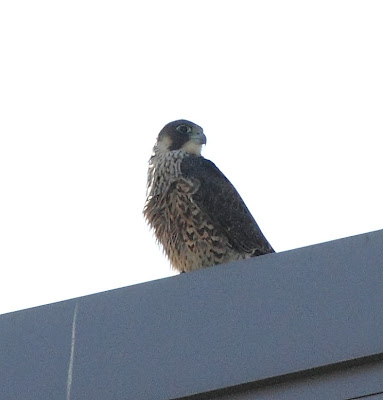 Posted by Dave Morrison at 01:51 No comments:

A good Bird of Prey story


Seeing as we always seem to be hearing of persecution stories involving Birds of Prey, I thought I would relate this story which took place in West Thurrock and concerned a company called Industrial Chemicals Limited.
It shows the lengths people will go to and how high nature is regarded, I found the Companies and employees approach to this absolutely brilliant, they could have just as easy turned round and said it’s on its own and we’re too busy, people care.

On Tuesday I got called out to the Company saying that a Peregrine had become trapped in a Factory, on arrival I found that it was a Sparrowhawk, although not Schedule 1 it is still no lesser of a wild bird. Pale fringing to the coverts, dark brown back, clean feathering and size pointed towards it being a juvenile female. 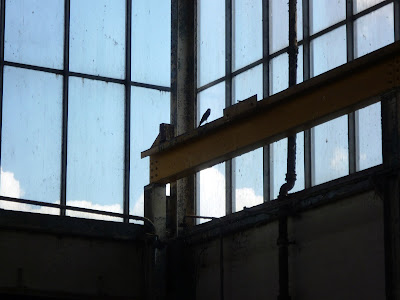 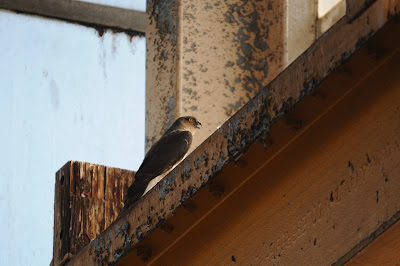 Maitland Wood, the supervisor who had contacted me said that it had been there since yesterday, they had been keeping an eye on it and had left the doors open all evening and night in the hope that it would exit unaided. I suspect that it had entered whilst chasing a pigeon, unfortunately it did not have the savvy to come down lower for freedom, all she could see was the higher level and the glass panes to freedom.

On Monday from what I can understand she was doing circuits from one end of the Factory to the other, when I arrived on Tuesday she was sticking to one end seeking an escape but was still very lively, in short I had no chance of catching her.
We discussed options, there were very few as there were no windows at the higher levels, Maitland then made the decision, get a Cherry Picker and Forklift, we are going to take one of the large windows out, fair play to him.
2 men then got a Cherry Picker and made their way round outside and up to the window, the Sparrowhawk seeing them from the inside moved to the middle of the Factory and waited, it took around 40 minutes to remove all the plastic beading and putty. The problem then was that it had to be pushed out from the inside, a Telescopic Forklift was bought inside the Factory and the window was eased out to the chaps outside. This I might add was done by Maitland sitting on a Pallet on the Forks, not easy by any means and a lot harder when you’re not comfortable with heights. 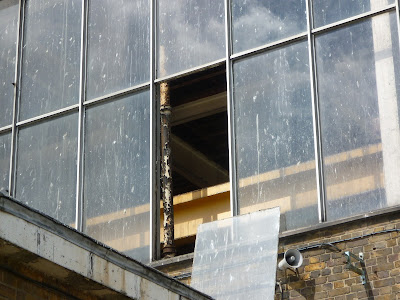 Operation complete, in the meantime the female had flown to the opposite corner and placed herself tight in a corner out of eyesight. Another 2 men then went up and flushed her out and hopefully towards the open window.
As if pre-ordained she flew across and landed on a Girder right next to the open window, a few seconds of hesitation and then she was gone.
A few more workers had gathered behind and a bit of a cheer went up when she exited the window, it had worked perfectly and I know everyone found the whole episode very satisfying, I know I did and I didn’t do anything, they did it all.

The 6 workers and the company, Industrial Chemicals Limited deserve a big pat on the back, there’s always a place for nature, even in a Factory on an industrial estate.

Posted by Dave Morrison at 18:17 No comments: