From others, namely Rose, Morg and Stuart from the LPP who had monitored them over the last week or so doing a great job, I knew before I arrived at 4.45am that they had fledged and were on the wing. Even better all 4 were safe and sound and were flying strongly.


If you watch peregrines, dawn is always the best time to watch them, as I am getting older, just turned 55 no less, getting up at silly o’clock is getting harder. It is the best time to watch them, all that is on the adults and juveniles mind is FOOD! This makes them very very active and such was the case when I arrived, I could hear them a 100 metres away from the nest site, the noise was unbelievable, the sight even better.
Briefly all 6 were in the air interacting, a staggering sight in anyone’s book, even for me who has watched them for over 12 years, seeing this in the heart of London make all those early mornings worthwhile.
As expected as soon as I disembarked from the car, all had dispersed around the structure. The weather was not too bad, not great, a little overcast but possibly good enough to get some half decent photos. I decided to have a look round to see if I could find myself a spot out of the way so not to draw attention to the birds, mind you the racket they were making they were impossible to ignore. 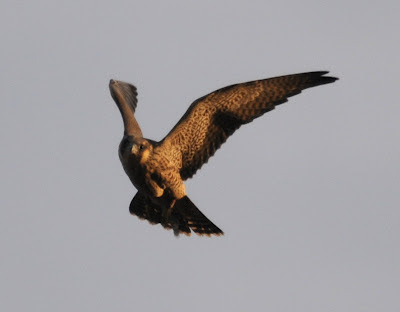 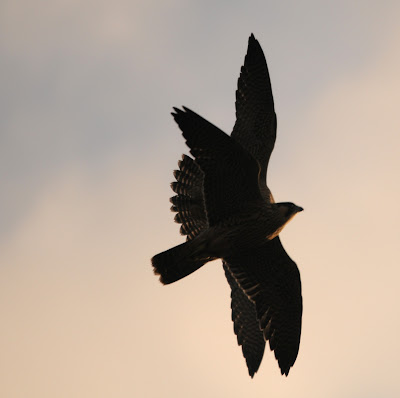 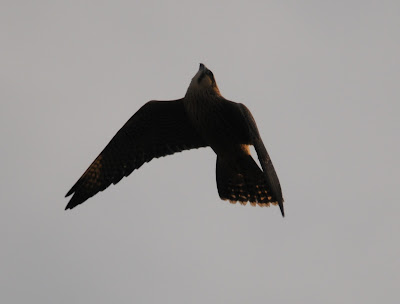 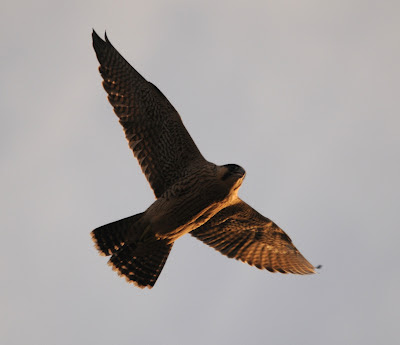 I found myself a spot on a little private factory estate, not viewable from the road so I tucked myself away around a corner and waited. At this stage in there development the juveniles are still flying low, they are not street wise like the adults who will only come down so far, with the juv’s there are no boundaries as yet.
Staying in one position is limited but I did get to record some excellent behaviour, I was facing the light/dark stretch of sky for most shots but not too bad otherwise.
Watching the juveniles, as usual it is a first come first serve basis when it comes to food; basically this means that if the Tiercel is spotted far out bringing in prey, it is who can get to him first. He bought in prey on 3 occasions, he was intercepted on all, sometimes by up to 3 juveniles, airborne food passes took place. After this the trick was to get back to the structure without your brother or sister nailing you from underneath and then losing your meal. On one such time a feral pigeon was dropped, all the Tiercels hard work undone by two scrapping juveniles. 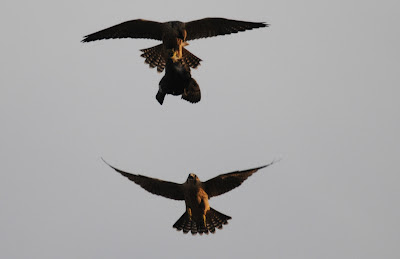 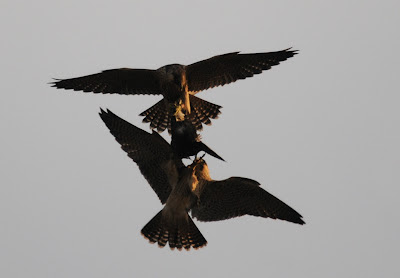 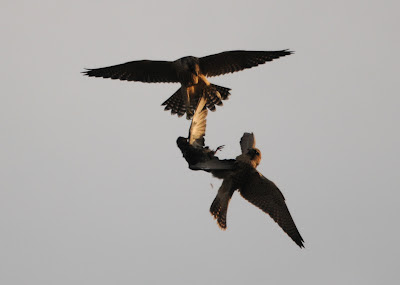 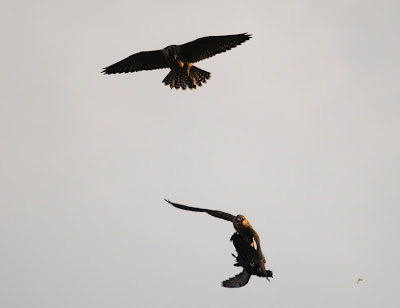 While I was watching it looks as if the juveniles are already following the adults and travelling further afield, on one such foray, the direction they were taking would have took them straight to Parliament. If they have not already been there, it is only a matter of time, possibly this week hopefully. Watching these juveniles compared to last year’s juv’s seems to show that these are more active and adventurous. Much of this is very likely down to the weather, at the moment we have good winds, sometimes too strong, it makes flying effortless for them and they can roam more, all the time building up wing strength.
I decided after to go to Parliament to check to see if any peregrines were present, lo and behold the Tiercel was there, very likely having a breather from the kids.
I will check again next weekend, I have a feeling that they may be at Parliament.

Posted by Dave Morrison at 00:45 No comments:

Last weekend - will they or won't they?

In the end 4 did and 4 didn’t, firstly another London site fledged that I monitor and then the Parliament birds, which laid at a slightly later date, stayed tight to the nest ledge and went through the motions with wing flapping and exercising.

This London site I am particularly pleased with, last year only one fledged and he injured his leg – see ‘Injured Juvenile Peregrine’, this year there were 4 juveniles, this came to light after an earlier ringing and DNA session revealed the 4 little chaps. One of the juveniles was absolutely enormous and we were in no doubt she was a female, looking at the others going by size and weight it appeared we had 2 male and 2 females.
Arriving at dawn, not a good morning weather-wise, I have to say the weather is unbelievable at the moment, what summer? It soon became apparent that all were on the wing and were flying strongly enough to make me think that they had probably fledged a couple of days earlier.Allthough there flight was good enough, on this particular site grounding has never been an issue due to a massive roof to exercise on, there landings left a lot to be desired. Saturday was a windy morning and none were getting it right, in time they will, as they say practice makes perfect. 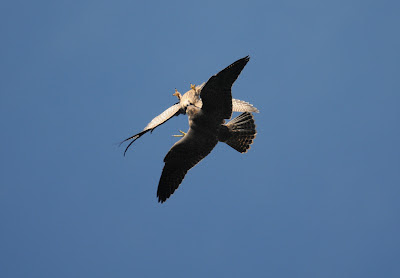 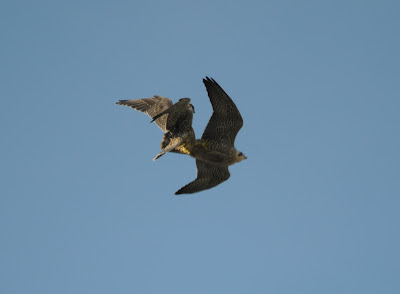 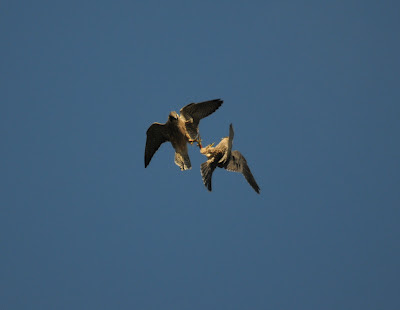 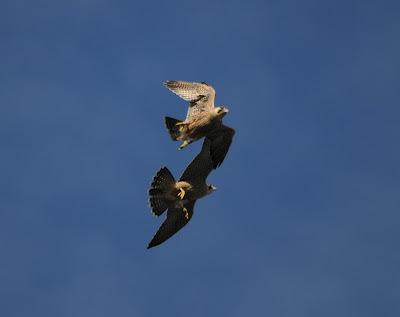 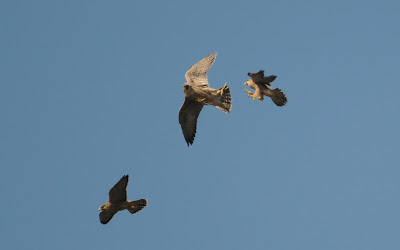 Arriving very early showed firstly 3 juveniles on the nest ledge and a little while later they were joined by the 4th.
I watched them over a 3 hour period and none showed any signs of taking the plunge, all seemed content but were wing flapping and exercising for the big day. The adult Tiercel was hunting constantly but never took prey while I was present. Looking at them I would expect them to fledge around mid-week, hopefully there will be no accidents.
Once fledged it remains to be seen when they will go to Parliament, the earliest date I have had is July 10th, they are eagerly awaited so it would be good to see them break the July record for arriving back.

Posted by Dave Morrison at 22:44 No comments:

Having just returned from Bulgaria, as a birder it is a must, 16 species of bird of prey no less, it was again catch up time with the Peregrines in London.
As you can imagine it is hard trying to keep a diary going as you cannot name sites, especially if the diary participants (Parliament birds) move site every year. Due to their nest site location I am reluctant to take photos of the birds and draw attention to them; I have taken photos in the past but nothing that hopefully gives the game away. As mentioned before it is not an ideal area to be walking round with optics.
If they were at Parliament it would no doubt be easier, this may well happen in the future as the nest site building may well becoming under threat from Contractors.
This year they have 4 juveniles, hopefully all will make it and fledge without mishap, I expect them to start visiting Parliament around the 1st week in July, the adult Tiercel may well start visiting earlier to get away from the ‘ kids’.

Elsewhere on the pairs that I monitor, there have been successes and failures, the regular sites mostly coming up trumps but worryingly 2 pairs have gone off the map from their regular nest sites. These are the 2 pairs mentioned earlier in the blog, I have spent the last 2 month’s trying to locate both of these pairs to no avail, it is easy to read more into it with the persecution they face in other areas of the country. It could be simply a case of moving site but knowing the area and basically every suitable building within their territory it does make you wonder, why move from a successful nest site location? Both sites offer no disturbance issues so you do tend to think along more sinister lines unfortunately, this is the England we live in, raptor persecution is a threat, especially up north.
This weekend I am hoping to get to the Parliament birds to see how they are getting on, fledging is now very close, 2 of the 3 Charring X birds have taken the plunge, see below for the link.