Parakeets and the weekend

With glorious sunshine I gave Parliament a miss and decided on 2 other sites to check on progress with half a mind on some photography given the weather.
Parliament is going to be awkward from now with the Olympics as I drive, its ok getting up there at dawn but getting home could prove a challenge to say the least, the tube will most likely be chock a block as well. I did manage to visit on Wednesday but alas the weather and the birds did not cooperate, so much for the last post – back at last, they are back but they keep going, it’s a big old playground out there. 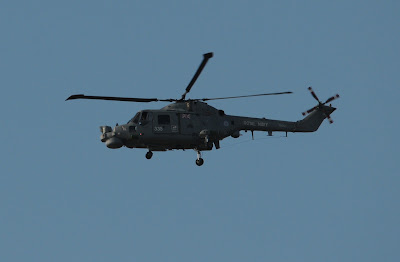 On to Parakeets or given their full name, Rose Ringed or Ring Necked, Peregrines seem to love them, in London I would say they are only 3rd to the feral pigeon and Starling, ferals will always be no 1 due to their abundance.
Of the 2 sites I visited, both have dependant juveniles, 3 RNP were taken on the Saturday by the 1st pair and 2 were caught by the Sunday pair, a total of 5 for these 2 pairs for the 2 days, bearing in mind they will likely hunt again in the afternoon it is likely more.
The parakeets flying style seems to make them a target for Peregrines(they always seem to be going somewhere fast) either aloft or waiting for a flyby, all the Parakeets I usually see are either leaving a roost en masse or in large groups heading for distant favoured feeding areas. I suspect it is this movement that takes place at dawn which the Peregrines may well have learnt to exploit, I know of 2 pairs of peregrines that regularly fly to designated spots to wait for ferals leaving roosts, perhaps the same may apply for Parakeets. On the other hand it could be that there are now so many Ring Necked Parakeets in London that it is inevitable that they will fall as prey. I suspect that in the not too distant future they may well come under DEFRA’s radar as a non-native species similar to Ruddy Duck, I have to say that like many I never agreed with that cull.

Of the 2 pairs that I watched over the weekend, all of the juveniles have been ringed, but as well as this all have had a feather removed for DNA recording, with London’s population it is very welcome for the future, hopefully it will never be needed . 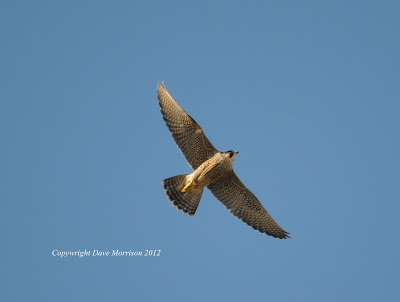 On another site in London a pair that fledged 2 juveniles in 2011 have failed this year due to the installation of a large pirate radio mast; this was installed directly above the nest ledge after gaining access illegally to the roof space. They must have been on the roof for hours keeping the pair from incubating and the peregrines unfortunately deserted, the matter is being investigated by the Metropolitan Police, OFCOM and the local Council. From what I gather they will be hard to trace.
With decent weather again forecast for this weekend I may well brave the Olympics on Sunday to try and get to Parliament, after all can’t let a little sports event get in the way of the peregrines can we.

Parliament pair- back at last

In fact they came back on the 4th and were seen and heard by many people at Parliament, I had planned to visit on the 7th but the monthly birders drink the night before put paid to that, a sore head no less.
Despite the constant rain I decided to visit, firstly to check and see if they were present and then also clean out the nest box balcony with Tom on Victoria Tower, whilst up there we observed some great action which I will relate later.
I am not going to talk about the weather despite being sick to death of it, much the same as everyone else; we it appears in and around London are getting off pretty lightly. In many other areas around the country people have had their homes flooded and lost much of their belongings. You can only sympathise with them, it seems the climate is changing; it is easily the wettest June/July that I can remember.

I was lucky this morning when I arrived, it was not raining and Big Ben was showing 4.35a.m, in fact the rain held off to around 10.00a.m.Hoping that they were present I waited in the semi darkness, at 4.40a.m no less than 3 juveniles came out from Victoria Tower, one with a pigeon wing, they were present!
They all eventually flew to Westminster Abbey and this was where the 3 stayed for a good hour, during that time I also located the Tiercel on prey feeding whilst one of the juv’s called his hunger to the world, the Tiercel ignored him. 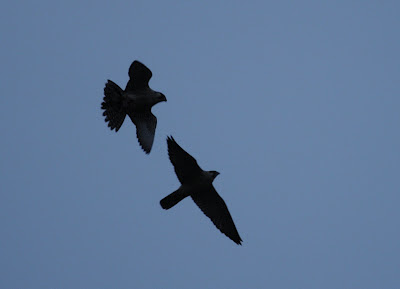 Despite a good search I could not locate the adult Falcon or the remaining juvenile, Big Ben, Middle and Victoria Tower were all quiet, I suspect that both were at the nest site together.
Presently the Tiercel relinquished the remains of the pigeon, he must have gone out in the dark to get past me unless he was already on the Abbey roosting and the pigeon may well have been stashed prey. The leftovers were taken by one of the male juveniles and he high tailed it towards the river with the other 2 juveniles right on his tail, the time was 6.45am, that was to be the last I saw of them until later around 9.30am.
I searched Victoria Tower but it was quite obvious that they had gone, it was eerily quiet for one thing, anyone who is involved with juvenile peregrines will know that they make a racket.
I watched the Tiercel for a while, he again took another feral pigeon, on landing looking around rather bemused as no juveniles were present, he then decided to stash the pigeon. 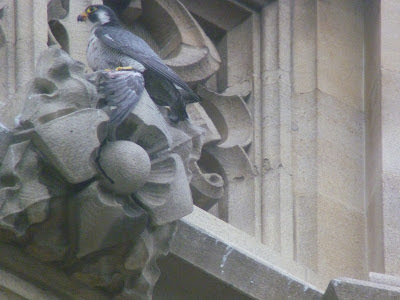 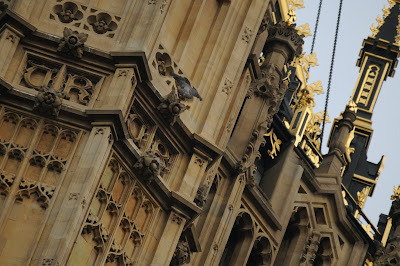 I left him there and headed into Parliament and up Victoria Tower.
It was while me and Tom were cleaning up the balcony that we heard a juvenile calling, it came into view below us, a male labouring under the weight of a feral pigeon, it was obviously looking for somewhere to land and feed.
Unfortunately it made the mistake of heading out over the river towards the London Eye, this section is Lesser Black Backed Gull territory as they have young on the adjacent Portcullis House.3 dived at him and he went even lower but turned back for Parliament to my relief. I recalled an incident a few years back when a Falconer lost a Harris Hawk somewhere along the Thames when it was forced into the river by large Gulls. As the juvenile made for Parliament 2 of the Gulls carried on giving him a hard time, this was when the cavalry arrived in the shape of the Tiercel, he came from above and set about and then drove off the 2 Gulls off before escorting the juvenile back to the Tower.
As we both watched, the juvenile followed by the Tiercel flew underneath us pretty close, it was a stunning sight and my only regret was that I could not capture it on the camera, how often do you get to see one underneath you this close.
A good end to the morning, all we need now is sunshine.

Posted by Dave Morrison at 16:05 No comments:

So much for predictions, I had high hopes they would defect from the nest site and come back to Parliament early but it looks as if my prediction was a little premature. I visited again at dawn on Sunday morning in the hope that the adults may well have encouraged them over; they are certainly trying too on the Tiercels part.
I arrived at 4.40am hoping that I would initially hear them, and then hopefully come out from roost. Unfortunately it was not to be although the Tiercel did emerge from his roost on Victoria Tower around 4.50am.
I expected him to go over to the nest site building straight away but instead he started to hunt, by now I had decided he was on his own. At just after 5.00a.m he pursued and caught a feral pigeon, I thought that's it, he’s off to feed one of the 4 juveniles, I was a little surprised as he partially plucked it and then stashed it on Victoria Tower. Further to this he then went up to Middle Tower and began to hunt again, unusual behaviour for a father with 4 hungry kids to feed, normal behaviour would be to take it straight back to the Falcon or one of the juveniles if he is not going to feed himself.

During the course of the morning, I stayed for about 3 hours he took another pigeon, had 6 more failed hunts and narrowly missed taking a Mistle Thrush, the Thrush was very lucky as it went for the ground and just about made it I am glad to say. The other pigeon was again stashed and he then repeated the earlier action of going up, this time to Big Ben to hunt again.
It could be that the hunting is better from Parliament and he is making the most of it by building up a ‘larder’ for the juveniles as dawn is always the best time to hunt.
His behaviour was a little odd with no prey taken over to the nest site juveniles while I was there, one reason could be that he is doing it to get the 4 juveniles over to Parliament, it is basically ' if you want to feed, you have to come over ' 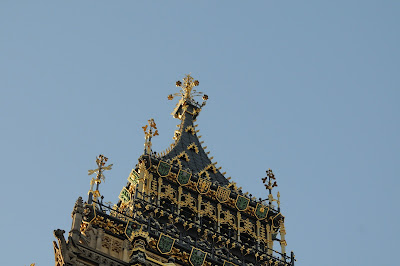 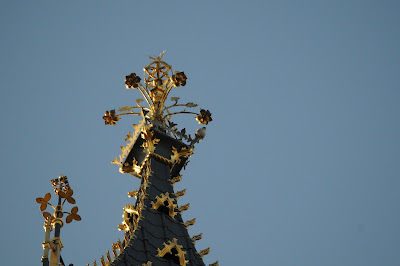 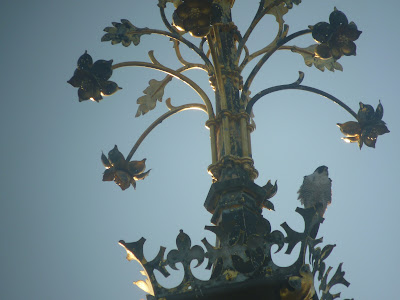 I dare say that the juveniles with their incredible eyesight may well be able to see him; the Falcon will be on 'guard duty ' watching over them, it will only take one to fly to Parliament and the rest will likely follow. The Falcon will also be hungry so it is odds on that she will go as well, again they may well follow her, hunger is a great motivator.
I will stick my neck out and say they will be over by the 8th; as usual they will likely prove me wrong again.