I visited Parliament at dawn on Tuesday, I have been very lucky of late with bright sunny mornings. With the later mornings the Park next door opened its gates just before dawn (7.00am) and I was able to watch from the grass area. I was hoping for some nest box activity but none materialised, it is early days yet, I am hoping, if it was an adult that entered it, for some prey stashing inside.

With a strong westerly wind I located both adults at 7.00am roosting on the eastern face of Victoria Tower, both simultaneously leaving at 7.20 and heading up river. Within 5 minutes they returned and with them was a male juvenile, he is not being fed but like some juveniles he does not feel confident enough to make the transission and leave as yet, he seems to come and go.

Neither adult showed any inclination to hunt, again possibly due to the presence of the juvenile, occasionally one of the adults would fly over to the Abbey but little else occurred, the Juvenile had a bit of spat with the adult Tiercel but other than this little activity.


This coming winter I am going to do some afternoon visits, they are very likely hunting in the afternoon so hopefully I can get some footage.
I intend to visit on Sunday, as soon as the last juvenile has gone it is likely they will return to normal hunting behaviour at dawn, also now that I can get in the park I should hopefully get some better photos with the sun behind me.
Posted by Dave Morrison at 22:26 No comments:

With the pair now firmly established back on Parliament it is now a lot easier to find them given that they have returned to their favoured roost spots, both adults were quickly located.

This particular morning I was due to meet Bertie Gregory and Tom, we were going up on Victoria Palace to hopefully get some photos of the pair. An added bonus was that one of the juveniles was still present, unseen but clearly audible from outside Victoria Gardens, it sounded as if it was on the east facing river side. It soon made itself seen before we went up and looked like a male juvenile with the adult Tiercel who was had also shown from roost.Time was marching on so we went up the Tower with the pair and a juvenile located.


For once the weather was ideal and we managed to get some half decent photos in a 2 hour stint, these were mainly of the juvenile, both adults were not hunting very likely due to the presence of the juv(they are encouraging it to go by not feeding it) this was despite both having empty crops. The juvenile made quite a few excursions out over the river and was lost to view, each time it returned to the top of Big Ben, in this period of time it was not seen to kill.
It was an absolutely glorious day and the views over London were spectacular, you can never tire of looking at a landscape like this.

On my previous visit of September 17th I went up with Tom and checked the nest box to see if any visible signs were apparent to see if they have given the box the once over. When I place and lay the substrate I always leave it absolutely flat so that I can see if anything has disturbed it, on opening the door it was quite obvious a peregrine had entered. 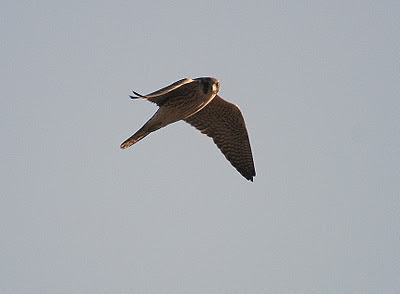 Further to this when I looked on the landing ledge there were needle marks dotted everywhere, these had come from there talons as it/ they had landed. Good news but still early days, was it one of the adults or a juvenile that entered? Time will tell, the next step is to photograph one of them on the ledge, if it is an adult using it they may well start stashing prey in it, watch this space!
Posted by Dave Morrison at 13:11 2 comments: