Referring to my last post - New Cam, I obviously cannot do my maths and got the incubation clock wrong. I forgot to add on the non incubation period at the start so incubation proper probably started around 26-27th.Have updated last post.
Posted by Dave Morrison at 04:09 No comments:

Given the fact that she laid the 1st egg on March 20th and working out the incubation clock, I make it 4-5 days incubation in March and to date 26 days in April.

This means that hatching of one of the eggs could be a likelihood this  weekend, the incubation period is usually 28-33 days so looking at the above we are very close.
I have been watching them as much as possible, admittedly not for long periods on the web cam so it has been hard to confirm whether the full clutch of 4 is still present. Changing position by either bird was only giving glimpses of an egg or 2 and I was constantly missing nest reliefs.

Today however (18th) I finally witnessed an egg relief and confirmed that all 4 were still present and there had been no breakages thankfully.


Last Saturday I also watched them from the exterior and witnessed another intruding peregrine, a female again coming in from the north. The Tiercel who was on guard duty promptly intercepted her and gave her a hard time before the incubating Falcon vacated the box and went after the intruder. The Tiercel however gave up on the harassment and promptly flew straight to the box to guard and incubate the eggs. Unlike a recent post (Into April and intruders) where the Tiercel joined the chase and left the eggs totally exposed, this male was a bit more clued up.

The regularity of which I am seeing intruders, not just at one site but many others gives rise to a healthy population as mentioned before in London and the South East but how long will it be before intruders interrupt breeding?

As you may be aware from my London Peregrines website, I do occasionally have some connection with National Grid in relation to pylon breeding peregrines, pylons are an ideal nest site for many pairs and do open up the countryside for breeding peregrines.

Being a Schedule 1 species I can sympathise with NGrid, I would like to place a nest box/Tray or 2 on strategic pylons where pairs are territorial but they have bigger issues due to the fact that they would be liable if someone tried to climb a pylon and was injured trying to get to a box. I found this one quite strange; apparently it is their responsibility to make it unclimable. On top of this, if they needed access on an occupied pylon they would have to apply to DEFRA (everyone’s favourite) to climb said pylon.
However given the regularity of which peregrines are breeding/attempting to breed on pylons across the country and not forgetting pylon breeding Hobbies, I think it is high time they addressed the situation, it will only increase with density.
Peregrines can and will nest on any pylon, I have had a number of discussions with NGrid over this, the fact is that with a stick nest, before they(maintenance) climb the pylon, unless surveyed beforehand they will not know what is incubating in it, Crow or Peregrine or even Hobby.

My argument to them is that by placing a nest box/tray you will contain them to one pylon annually if accepted, which would be very likely for a territorial pair. The theory being that it would not be a lottery every year as to which pylon they would choose, and more importantly since they would know where they are, they would not break any Schedule 1 licensing law unintentionally.

Have a look at the photos below, they are of a Saker Falcon in Hungary breeding in a nest box on a pylon, very refreshing to see it, it’s a pity that National Grid cannot find a way to emulate this. The fact of the matter is that many peregrines fail on pylons due to egg rolling or extreme weather/exposure, a specially designed box/tray would alleviate that. 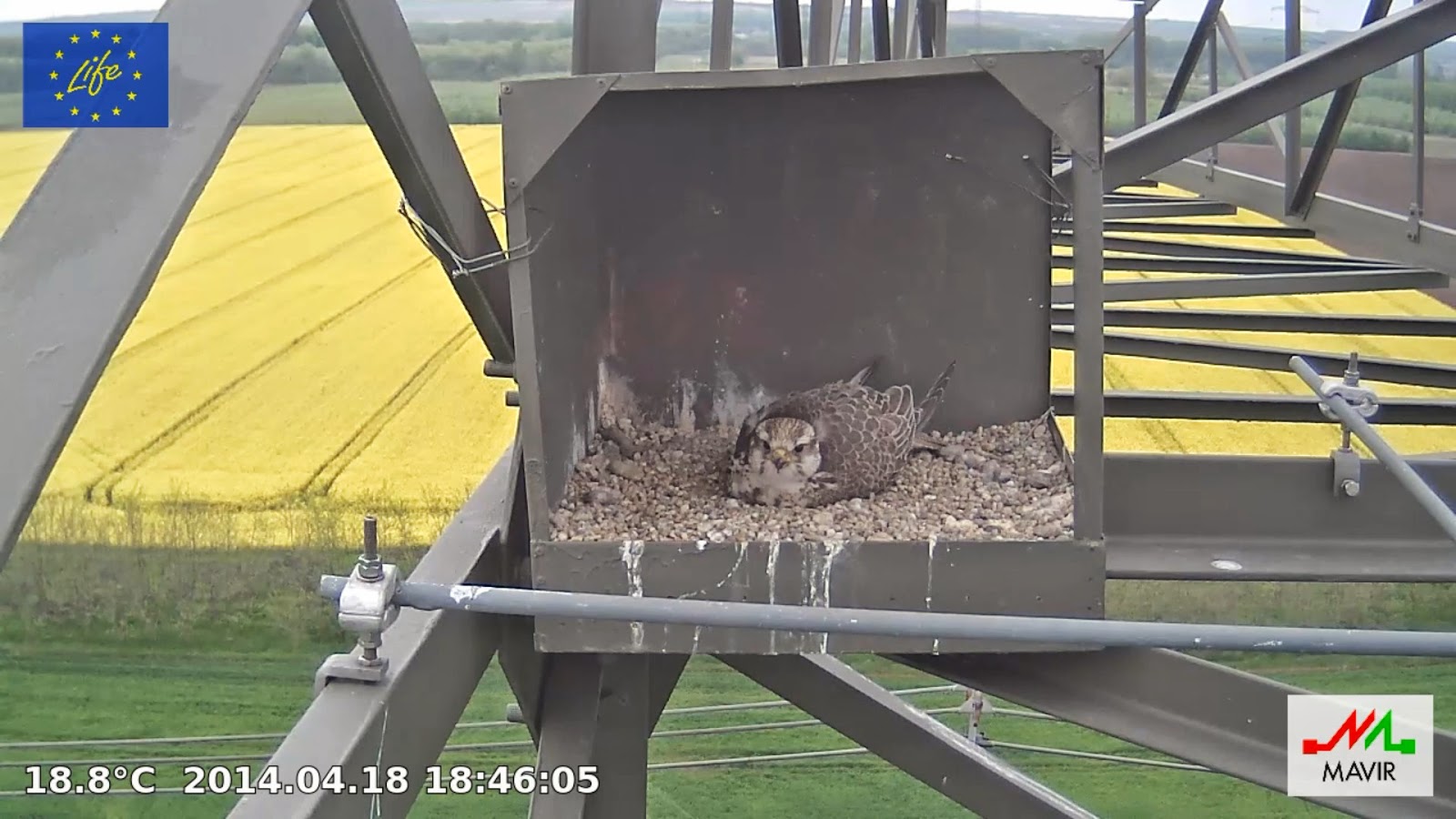 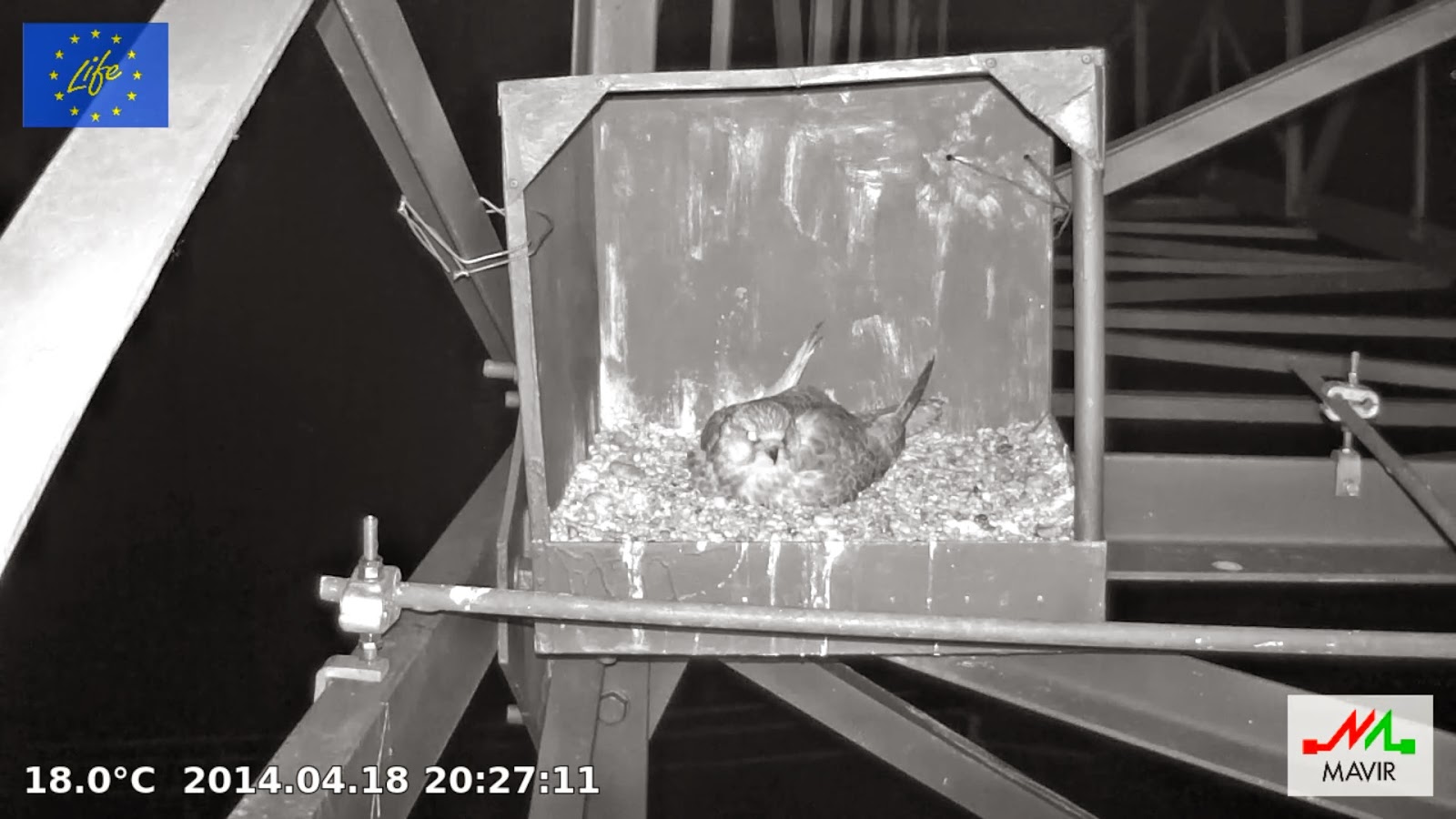 Posted by Dave Morrison at 06:56 No comments:

As many of you are aware Norwich Cathedral has of late had a regular intruding bird, the intruder ‘DP’ is showing up with some regularity and has even got to the nest site.
From past posts you will know that I was present at the ringing of this female on May 25th 2012, even then she was simply enormous and bigger than the other female. I know there is always going to be size difference between siblings making a difference in size but even so the size between the 4 was very apparent.

The brood consisted of 2 Tiercels and 2 Falcons, all fledged successfully but one was lost rather early on, a male unfortunately.


From earlier posts it is always good to hear of ringed birds and sightings but rather mischievously she has made a bit of a nuisance of herself to the Cathedral pair. What she is doing is an everyday occurrence, intruding peregrines go with the territory, and it comes from having a better population than years gone by. Visiting the nest site is normal and healthy, getting to the nest tray is a little unusual but I dare say it has happened before on other sites but this time was recorded by CCTV.

I have no doubt that she would not have got to it if the resident Falcon was present, as it was the incubating Tiercel did very well to stay as long as he did.

He was obviously intimidated by her but that is part of the conditioning of every Tiercel, Falcons are always dominant, even intruding ones. In open sky he could have been more aggressive but without the support of his mate all he can do was probably dive her.

Since then, video and photos were very kindly forwarded by the Hawk and Owl Trust, BBC Norfolk have picked the story up and are calling her a ‘ rogue ‘ Peregrine and an egg breaker, I take it that this is the BBC dramatising the event, a bit extreme.

In any event she would be more likely to brood them rather than break them I would have thought, although there would be no bond to the eggs.

If she continues to cause mischief there is a possible case for a takeover, hopefully not during incubation, the chick stage or fledging, that would not be good for obvious reasons.

Her natal site is urban so I expect that she will be more attracted to Cities – Towns and large buildings/structure, this is one of the reasons that I expect she is in Norwich, additionally the presence of the resident pair.

If she stays in Norwich one possibility that could alleviate the situation, is to give her a nest box or tray to herself, she comes from one. Not sure how many tall buildings/structures there are in Norwich and if any are sufficiently of a height/compatible and suitable for nesting but ideally that may help. Additionally it would have to be at a far enough distance away, territories in London were once a 2-3 mile radius between pairs, on one site now it is about ½ a mile, both Tiercels regularly clash.

If she stays she must be roosting somewhere on a favoured building, the BTO survey may well turn her up.
Of course she could just be passing through looking for a Tiercel on territory; the above is just a possibility if she continues to stay.

Whatever happens, I hope there is no takeover although it is just part of the natural process in peregrines, hopefully she can find a territory of her own, there’s certainly enough Tiercels out there for her.

Below is a link to the video, as you can see she is pretty careful around the eggs, also she is constantly looking up, no doubt expecting attack from the returning Falcon.

Into April and intruders

I was at a breeding site on Wednesday; the Falcon was incubating when an intruding bird showed up, in London nowadays more or less a daily occurrence for most pairs. It appears more so at this time of year as migrant peregrines add to home grown nationwide movement.

The intruder, an immature female was unringed and was instantly attacked by the resident male, being smaller he cannot directly close with her as he would come off 2nd best and possibly be injured, as it was he tried to usher her out of his territory. Sometimes it’s hard to work out the Tiercel’s behaviour due to their tendency to flirt. 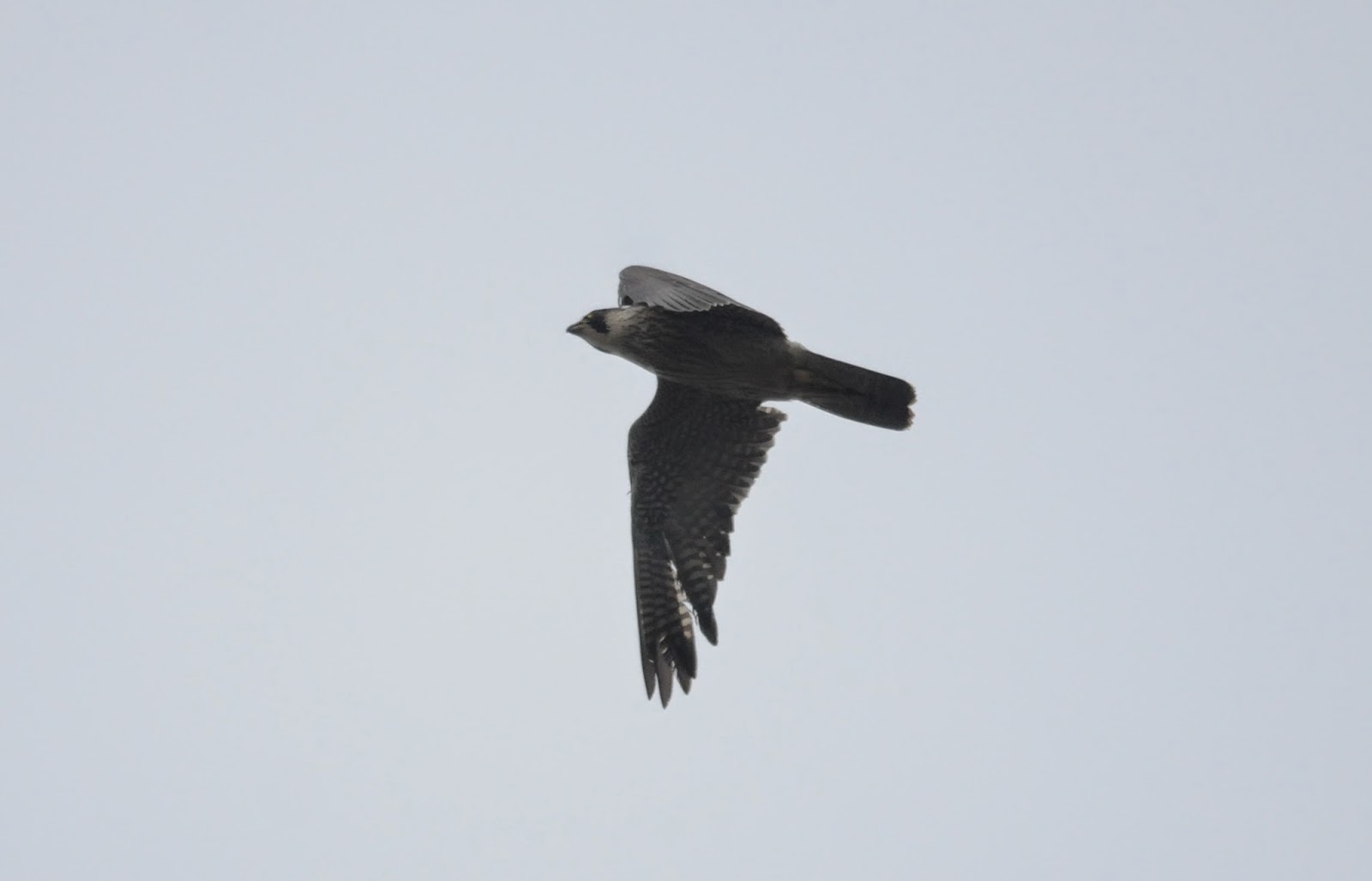 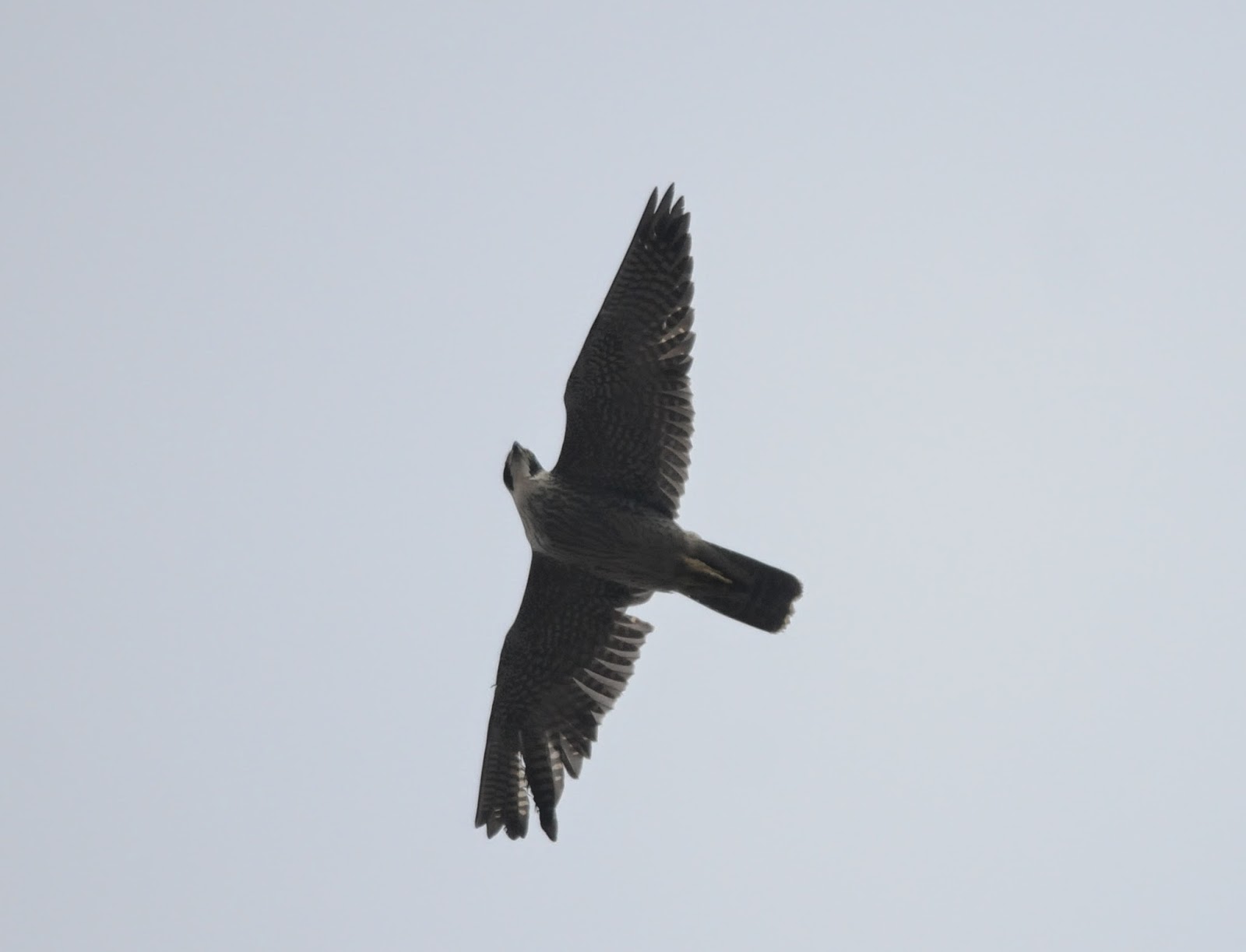 The resident female, incubating, hearing the kafuffle exited the nest box at a rate of knots and went straight at the intruding female. Another female is another matter, and an angry one protecting a nest site from a rival is to be avoided, the intruder high tailed it south with the pair hot on her heels. It did occur to me that being unringed it could have been their own female offspring from last year; they had a male and female juvenile. But given the reaction to this immature and the level of aggression shown I would say not, I do believe that they do recognise their own off spring, even 9 months later. Over the years I have seen territorial adults receive immatures the following year and there has not been the reaction I expected, to an extent they have been tolerated ,I can only surmise that they were the previous year’s offspring.


Back to the chase, all 3 were lost to view heading south which now meant the eggs were totally unguarded, minutes went by, it’s at times like this that they lose eggs to Crows but thankfully she came back after 2 minutes and resumed incubating.

The intruder was very much the worse for wear with some wing damage so I suspect that she had tangled with other territorial pairs, possibly trying to usurp a pair or find a territory of her own, prime sites are strongly defended all year round.

I may have seen this bird before and will check back on photos.

Posted by Dave Morrison at 06:42 No comments: