I managed a to get a sequence of photos recently of an adult female Peregrine arriving with prey and shortly after a hungry juvenile appearing  also. 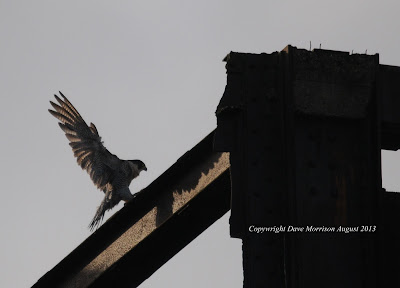 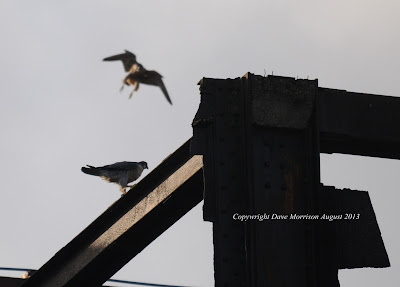 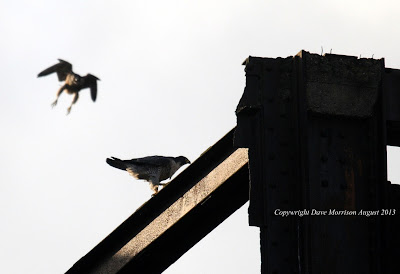 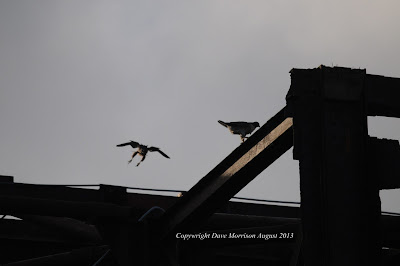 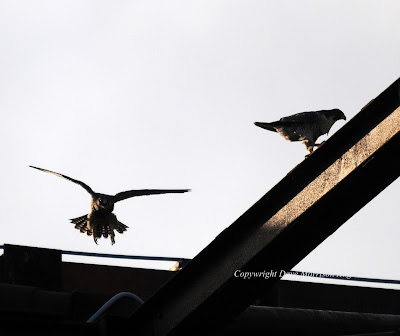 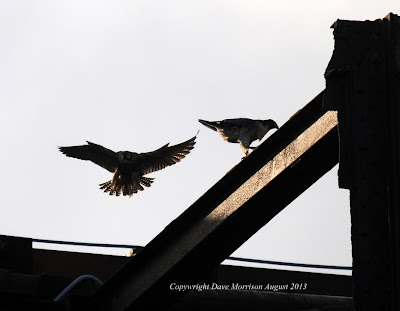 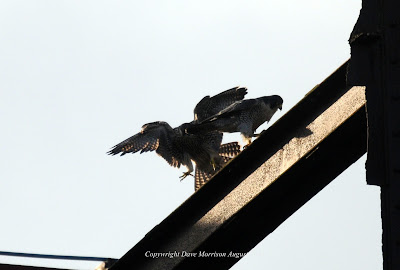 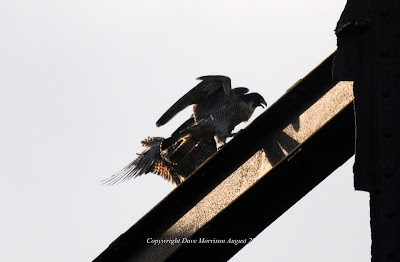 I was against the light unfortunately but they have not come out too bad.
Posted by Dave Morrison at 22:32 No comments:

Whilst undertaking a survey on Friday in the middle of nowhere I came across a pretty agitated adult Red Kite, as there were no tallish trees around for nesting, and it is getting late, I presumed there was a fledged juvenile nearby.
Changing track and moving away so she could settle down, I then walked straight onto a juvenile who flushed from a low tree, this climbed up with the adult and then landed in another tree. I was walking away from her but as you can see from the photos, she kept an eye on me coming quite close at times. 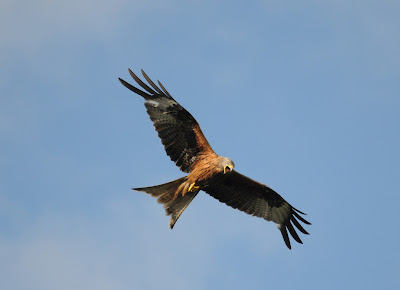 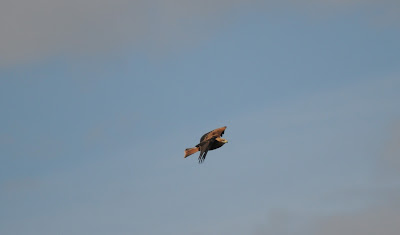 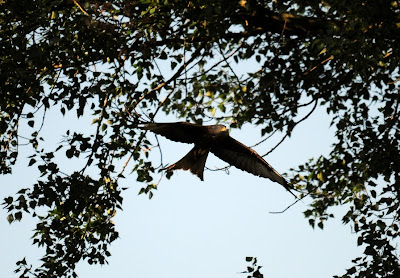 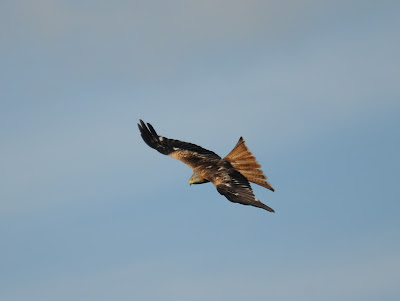 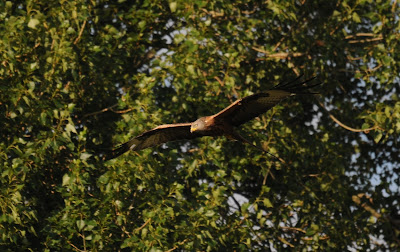 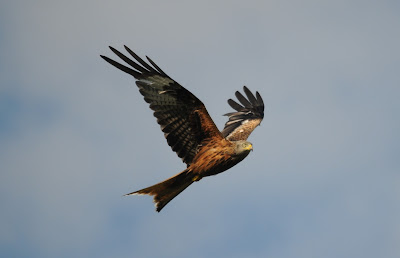 Of late I have been working away quite a bit and I have been constantly seeing Red Kites, not being familiar with their feeding habits here in Essex where they are still a bit of a rarity, it has been a bit of an education watching them. What I did not know was that they come right into large towns, sometimes quite low searching for carrion or road kills, additionally they also seem to work roads much the same as Buzzards, no doubt for road kill. It is quite a sight sitting at a set of lights and one drifts over low following a line of houses or gardens, no wonder there a photographers favourite.

Posted by Dave Morrison at 00:01 No comments:

So where did they go?

Back in February/March –see Looking Good – February / A pair of Hybrids March 11th and Still together March 12th I found 2 Hybrids that appeared to have bonded with the smaller presumed male displaying for all his worth.

Have I seen them since? not a sausage, they quite simply disappeared; if they were around I would have expected to have picked them up given the area that I cover monitoring peregrines in London.
Additionally London has a lot of Birders, the smaller presumed male may be mistaken for a peregrine at distance but there is no disguising the size and colour of that stunning ‘female’, in short if still in London I would have expected her to be seen. As far as I am aware there has been no mention of Hybrid(s) on the Wiki’s or Forum’s so I am at a loss as to where they went after holding to a ‘territory’ and being easy to find. 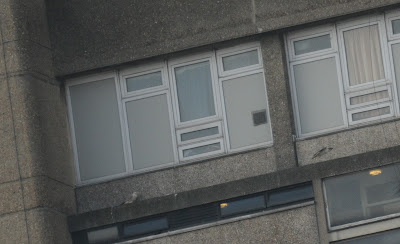 I can only presume they have gone out of town, if still a pair, perhaps to another urban area, it just seems unusual that they disappeared right at the start of the breeding season. Coincidence? I really do not know, are they capable of breeding? Again I do not know, will they stay paired? Lots of questions but unfortunately no answers. It really interests me, as far as I am aware, 2 hybrids escapes have never bonded in the wild? 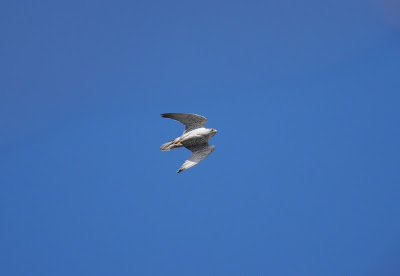 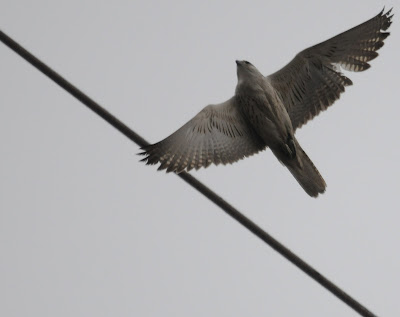 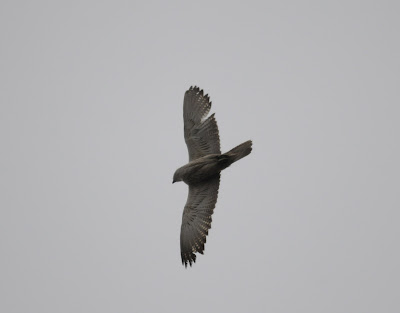 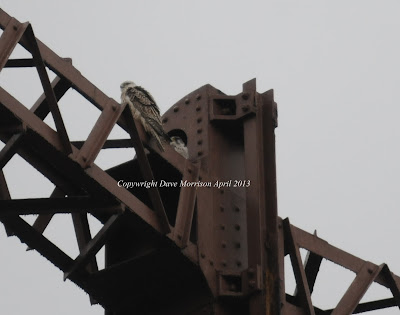 My worry at the time was that if capable of breeding, would they eventually get into the London Peregrine genes, I even contacted Falconers with an aim to try and catch them probably with a lure. Unfortunately or fortunately, whichever way you want to look at it, they went before this could be put into action but I have to admit I miss seeing them, they were both spectacular looking birds and quite breath-taking to watch.

It’s been a while since I visited Parliament so I decided on Saturday to see if they were present and back on Parliament, the idea being to try and get some decent photos of the Falcon. From recent posts you will know that they failed this year, the suspicion due to a position change of the nest scrape is that we may have a new female. Furthermore after failing I would have expected them to return to Parliament, with juveniles they usually abandon the nest site building and head back to Parliament around July 10th onwards.

Arriving around 4.45am, the Park was not open yet, I started to search favoured spots for roosting birds, and additionally I also walked round to the Abbey. After an hour of searching in vain I was pretty sure they were not present so I headed off to the nest site building not expecting to find them which was the case when I last visited.
A ¼ of a mile away sitting at traffic lights I spotted one bird in profile sitting at the peak of the building, good news at least one or more were present. On arrival I found both birds, unfortunately as mentioned in the past it’s not the sort of area where you can get Photographic Equipment /Telescope out on the Street so photos of the supposed new female will have to wait until Parliament. Another possible reason that they are staying is that it could be a better area for hunting.

At least they were present, just a pity about them failing this year, quite a few people look forward to seeing the ‘noisy’ juveniles when they return to Parliament. I will hopefully be able to check them again next week, if they defect.

In a follow up visit after visiting the 2 released juveniles last week I headed for the 3rd female juvenile which was released on the same day as the other 2.She is ok but she appears to have lost one of her brothers, I watched for 2 hours with the adult Falcon present and only the 2 juveniles were on show.
This site is the Scaffold Nest box pairing, during the 2 hours, the adult Tiercel also came in with prey which was claimed by the female before her brother could take it, I would have expected the 3rd juvenile to also try and make a claim for it. 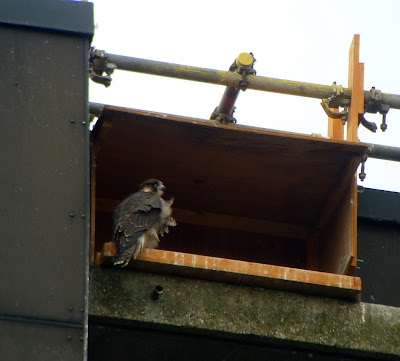 I do hope I am wrong and it could well be the case that he has already claimed prey before I arrived, in this case he could be feeding on his own or laying up after feeding. As they say, time will tell and I will try and get out during the week for another look to confirm, as yet going their own way and independence are a long way off.
This site will very likely have 2 webcams installed later in the year, HD hopefully, plans are afoot so fingers crossed that all goes well.

Posted by Dave Morrison at 16:34 No comments:

On Wednesday I got another chance to check up on 2 of the 3 juveniles that were released 2 weeks ago, the first site I checked was the one where the foster female juvenile was released with a male juvenile.
As you know this site originally held 4 juveniles, all ringed, a good sized brood by any standards, personally I think the larger the brood the better, not just for obvious reasons, greater numbers as they practice on each other constantly better prepares them for life alone and taking their own prey.
With the added foster juvenile now fully accepted and brood size now up to 5, I settled down to wait as they emerged at dawn, the adult Tiercel left in near darkness.

After 30 minutes of watching them from when they emerged it was obvious there were only 4 juveniles, they all still roost on the nest building so he/she was not likely to be roosting somewhere on its own. Furthermore only the adult Tiercel left the building, the Falcon was still on site, unfortunately throughout the morning, I was there for 3 hours, I could only get too 4.All 4 were interacting when not feeding so the 5th if present would have joined in on the frivolities.

Although a pity that one had disappeared my next thoughts early on were, is it the foster or her ‘brother’ whom she was released with, RF.

It took me nearly an hour to read the numerals on the rings, I found ’RF’ and I also found the foster amongst the 4, she was easier to see not being a ringed bird. Looking at who was missing it looks as if a female juvenile has gone, you look for reasons, it is easy to jump to conclusions but urban juvenile peregrines face many hazards unfortunately.

The Tiercel on this site is from Chichester, during the course of the morning he took 3 Ring Necked Parakeets and a Feral Pigeon, he is an outstanding provider, I have no doubt he knows of a colony of the Parakeets, or has worked out there flight route. They are not common in the neighbourhood so he is flying to where they are, this I suspect is south due to the fact that he always returns from there with a Parakeet. 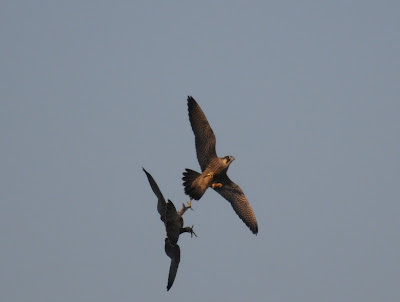 A good visit other than the missing juvenile, unfortunately there will always be mortalities, I will check up on the 3rd released juvenile over the weekend.

Below is a selection of photos taken on the 30th at a site in London. Seeing the 2 juveniles is particularly satisfying as this is the 1st successful breeding in 5 years. The older female who was present for that period was infertile so a new female took over, knowing Tiercel's and how 'flirty' they can be I was surprised it took that long.

As yet I have not got a good look at the new bird, she is smaller but I know she is ringed, it will be interesting to see where she hale's from.

Posted by Dave Morrison at 22:22 No comments: