It’s not very often that I go to Parliament and don’t see a peregrine even at this time of year when breeding is now over and Falcons do seem to wander or explore their territory more?
This morning looked to be going that way after failing to find a peregrine from dawn for a good couple of hours, the weather was great for photography with bright blue skies but the birds had become camera shy unfortunately.

Of the juvenile seen in August there was no sign, if he was still around I would have expected an adult nearby.
In the end the day was saved by the Tiercel arriving from the west, he came into Victoria Tower, perched up, crop was fullish and that was it, siesta time.


With the Tiercel now in a state of sleepy contentment bought on by a near full stomach that was it, hopefully they will not be so hard to see next time.

I visited another well-known site last week and had the fortune to watch and photograph a female Sparrowhawk, she was seemingly’ playing’ and interacting with some mobbing Crows and Magpies for over 25 minutes. 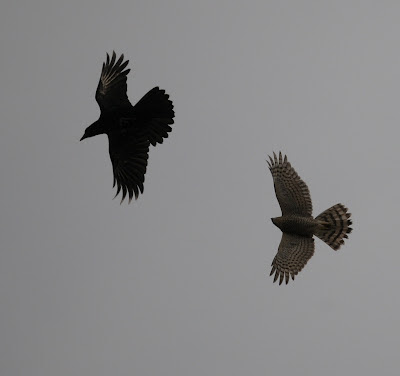 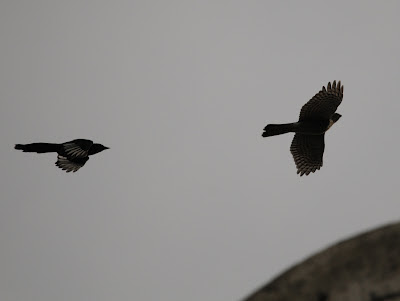 I should explain that it is a peregrine site and the resident Tiercel had left and was not in the area otherwise the light hearted mobbing by 6 Carrion Crows, 2 Magpies and the Sparrowhawk would not have taken place.

Needless to say he returned after a while and cleared all, the resident Falcon, having fed early a.m. just sat and watched the proceedings. She took no part in the interaction (about 50 metres away) and made no effort to ‘clear’ her territory, perhaps as she had not successfully bred this year and the territorial bond was not as strong. On the other hand she very likely sees it as part of a Tiercel’s workload being the dominant partner.

A casualty of the chase?

I recently got a call from Nicole and Howard at Rainham RSPB regarding a dead Peregrine found on the Tip, hoping that it was a case of mistaken identity I headed down there. On arrival, Dominic had been on the Tip checking Gulls, he confirmed that it was a Peregrine unfortunately, a sad sight as it was an adult and no doubt one of an established pairing.
Looking at the bird, it was quite large which was throwing me a bit as size suggested Falcon, but otherwise head shape and the pale area above the upper mandible pointed towards Tiercel. There is a lot of variation in size with Peregrines; it is not always the clear cut ‘females are a 1/3 again bigger than the males’.

I recently had 2 full grown juveniles which I knew were male and female, the difference in size was marginal, in flight you could just about tell them apart.
Examining the bird showed some upper bill damage and the neck was most certainly broken, it was found below a chain link fence showed that it had likely been in collision with some part of the fence. Thankfully death would have been instantaneous and the bird would not have suffered. The likely scenario is that it was chasing another bird at speed and failed to see the chain link fence in the heat of the pursuit. 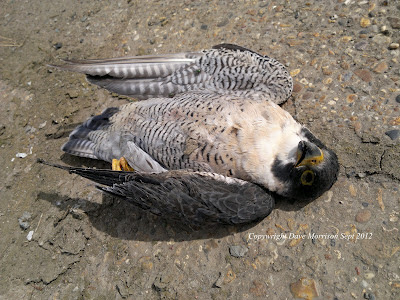 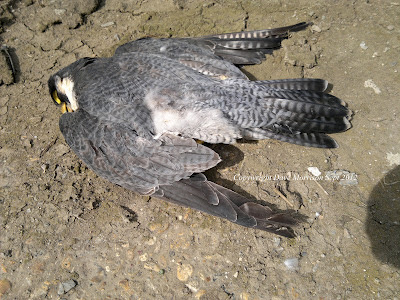 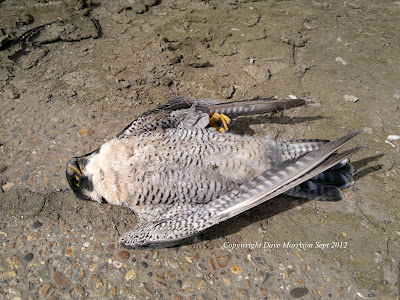 I was surprised given the location that Foxes had not got to it overnight but at least this way it could be autopsied and DNA recorded for future reference.

If, ignoring the fence, the only other cause of death could possibly have been another Peregrine, they are very territorial and aggressive; it may have been hit from a dive by another and sustained bill damage when it hit the ground.
Whatever happened I will find out soon from the autopsy and hopefully, as they pair for life, its mate will soon find another to bond with.

Unfortunately despite warnings to the contrary regarding photos on the blog, apparently some peregrine photos have been copied, it looks as if I will have to start copywriting from now on.

Posted by Dave Morrison at 01:41 No comments:

Out on their own


Over the weekend of the 25th/26th I visited 2 sites that had both been ringed and DNA sampled in May. One site produced 4 juveniles and the other 2 juveniles; of the larger clutch one juvenile was unfortunately lost but the remaining juveniles all were on their respective sites in mid-August.
After visiting both sites last weekend, all have gone there merry way and set out in the world, the first year will be the hardest and some may well not make it but some definitely will. 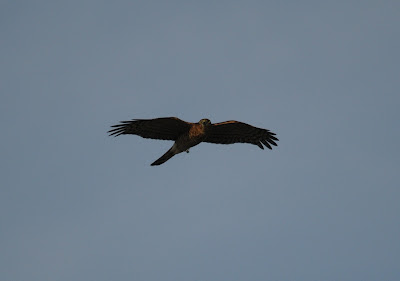 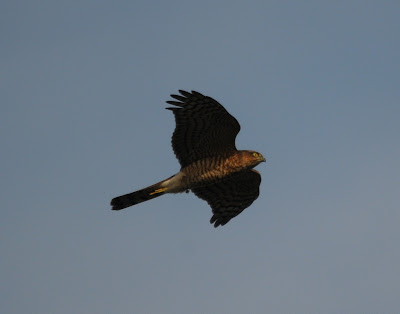 Both its English name and scientific name Falco peregrinus means ‘wandering Falcon’ and the juveniles most certainly will wander trying to avoid other Peregrine pairs in and around London. Hopefully they will get through the winter and possibly pair the following year, it’s a rare event that they will pair and breed the following year, but if paired it’s more likely to be the 2nd or 3rd breeding season. It is likely that as all were reared in the City as there natal site, they will likely try and find an urban area to ‘hold’ to.
This year 13 juveniles are carrying the standard BTO silver ring along with an orange ring signifying London, if you see them, if possible read the ring and contact either myself at www.londonperegrines.com or my colleagues at www.london-peregrine-partnership.org.uk If not readable just take a note of the birds location and time, hopefully we can then trace it back to its nest site and a ringing return from the BTO can then be forwarded to you.

As yet I have not been able to get back to Parliament but did visit a site at dawn this morning (Sunday) to check on a pair who went AWOL earlier in the breeding season. Glad to say they are now back on station, there is a big possibility that they bred elsewhere as their timing is perfect as most juveniles have now gone their own way.

I recently had a chance to visit the London Eye for the first time, it was quite an experience and below are some photos from the Eye looking towards Parliament, it shows Big Ben, then Middle Tower and finally Victoria Tower.

Posted by Dave Morrison at 09:41 No comments: