March 27th
This morning’s visit was to confirm that they are at the alternative nest site, I knew they were from previous posts, I can also add that they are already incubating. A nest relief was seen briefly, Tiercel taking over from the Falcon with the latter returning after about 2 minutes when she found no prey stashed.Tiercels do like to incubate and he held on well as she screamed at him to come off the eggs, he grudgingly gave up his position and then flew north.
Throughout the course of the morning he really did not hunt in earnest, he even found time to copulate with the Falcon; it appeared that neither bird was in any hurry to feed, although the Falcons actions earlier belied this.


I did see rather an amusing sight, the Tiercel had departed, again north and the Falcon was incubating, into view came a Carrion Crow, he landed on the far corner of the nest site building, out of sight of the incubating Falcon but the Tiercel missed nothing. Just as I wondered how long he could stay there without the Tiercel seeing him, the Crow took off in a panic and made for some trees nearby. Into view, flat out came the Tiercel, the Crow went lower down towards the road, the Tiercel went with him, at one point he seemed to tap him, they do this quite often, eventually the Crow made the sanctuary of some lower trees.
It was quite a sight to see a Crow flying down the road at bus height with pyscho peregrine attached to his rear end, not one I will forget in a while and I have seen a few Peregrine/Crow disagreements.
Hopefully they will again succeed and fledge juveniles, a lot of people at Parliament are waiting for them to come back, hopefully it will again be early July.


On one pretty well known site in London that I monitor, the pair have not successfully bred since 2007 when they fledged 3 juveniles, before this they had been successful since 2001,blanking in 2004 and 2006.Since 2007 they go through all the motions, pair bonding, ledge display, nest site selection and copulation. Despite this and the obvious intent to breed no resulting eggs are forthcoming.
A few years ago I decided after comparing photos, that it was a new Falcon on site, the old one presumably having been usurped by this female, the problem I think lies in the fact that this Falcon may well be too old to breed, or simply infertile. I have even watched her through the telescope incubating on nothing, it was on a scrape she had made, I timed her and she was on the phantom eggs for 1 hour 40 minutes if I remember correctly, she did this on a number of occasions. I suspect it is the Falcon equivalent of a phantom pregnancy. It is something I have not heard of before regarding peregrines despite doing some research.

What surprises me is that the Tiercel has stayed loyal and has not ‘flirted’ with another passing Falcon and encouraged her in, for him to try and breed year after year with her the pair bond must be very strong. Alternatively, although old?, she may well be still strong enough to resist another Falcon. There is enough strength in depth in London nowadays that many sites are challenged daily, presumably by single birds, on one day alone on this site, I recorded 6 intruders, Falcons, Tiercels and immatures.
Alternatively I have always put it down to the Falcon, I know it is the 2nd Tiercel since 2001 but he was present in 2007 when they last succeeded, the fault I think lies with the Falcon, either age or fertility is an issue.
Posted by Dave Morrison at 10:33 No comments:

I started the weekend with a visit to Parliament, after February’s visit I have resigned myself to the fact that they will use last year’s nest site up river. It would have been good if they had stayed at Parliament but the lure of a successful nest site was always going to be a massive carrot. All being well they will return to Government around the start of July, again this is flexible and depends on how confident the juveniles are in there flying ability, it could be earlier, it could be later.
On arrival at Parliament I followed my usual routine covering all faces out of the wind in dawns light, I decided pretty early they were not present and headed off to the nest site.
The Falcon was seen briefly and the Tiercel was a statue on the top most section of the building, this confirmed what I had suspected, the main thing now is that they succeed.
There will be no camera this year unfortunately, this means there will be no dates of eggs/hatching/juveniles etc……. I will cover as much as possible from the outside. As mentioned before it is not an ideal area and there are a few unsavoury characters strolling around in the early hours, it pays to be a bit discreet when you have a Telescope, Bin’s and a Camera on show.
Elsewhere on the sites that I cover it is business as usual, the Tiercels are getting very aggressive towards the local Crows and all are in full breeding behaviour, including the pair at Fulham Palace Road.


After last year’s 3 downed juveniles it was decided and discussed to publicise the site with the backing of NaturalEngland, the pair are already known locally and the Hospital is as secure as you can get. Getting more local people involved will also mean added security – see Parliament Feb 28th.
There is now a web cam so that the pair can be viewed by the general public, a decent web cam is long overdue in London and I must say that the images and behaviour observed have been first class. Additionally the site is now being linked to Barnes Wetland Centre with Simon King broadcasting live as part of the London Wild Bird Watch 2012.

The pair caught everyone out by laying there 1st egg on March 14th, more or less 2 weeks early, as of yesterday (Wednesday 21st) they had laid 4 eggs.

I headed up to town on the tube as it was a weekday otherwise you have to pay petrol, Congestion Charge and Parking, before you know it your £30.00 out of pocket, London is an expensive place to visit in the week if you drive.£7.00 on the Oyster was not too bad as I arrived at dawn, around 6.45am, I left the telescope at home, too much gear otherwise.
Looking at the wind showed the union jack going westwards so I thought they would likely be on the east side. For the next 30 minutes I searched every nook and cranny, no peregrines, I gave the Middle Tower and Big Ben the once over, not a sign. By now I had decided they had gone over to last year’s nest site where they successfully fledged 3 juveniles, hopefully where ever they breed they will be successful again. I will keep an eye on Parliament but will now start covering the upriver nest site more.
During the course of the morning I kept a look out and had more or less given up on them when low and behold they came in, just as I was getting ready to go. Both landed on Middle Tower where I managed to get a couple of photos, despite this it still looks as if the upriver nest site is favourite.
Time will tell. 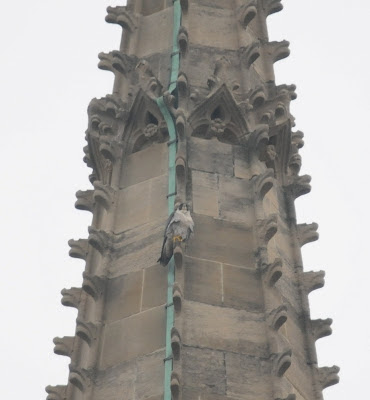 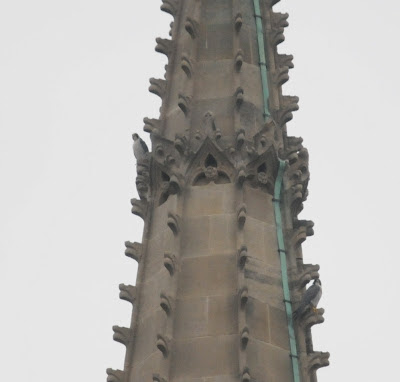 Another issue that I have been thinking of a lot lately is the number of pairs in London and there security.
Sad to say that in this country raptor persecution still persists and it is one big reason why sites in London are not publicised, it is a pity as the London public should have a chance to watch and be involved with these birds on their doorstep. It is an age old and awkward position, do you not publicise every site or publicise them with the view that, more eyes watching makes for a securer site. Parliament is publicised as it is secure, the Tate Modern is publicised as it is not a breeding site, in the end I think you have to judge each breeding site on its own merits and location, but is that right? If you get all the local people involved in each respective site there will undoubtedly be more security for the birds and that is what it is all about.
Out of town across the country other urban peregrine sites are publicised and on the internet, no problem. America, in particular New York, publicises every nest site and the world and his dog are involved, would the same approach be better in London, get local people involved?
If a minority of Eggers or Pigeon Fanciers want to find them they will, a recent court case showed this, an egg collector named 9 sites in London straight off the top of his head. In a rural location they should be kept unpublicised, there is little security on a lonely moor or cliff face to a determined individual. I have always kept all the sites that I monitor apart from Parliament unpublicised, but I must admit to re thinking, is it the right approach to each pair when it comes to their security and safety? 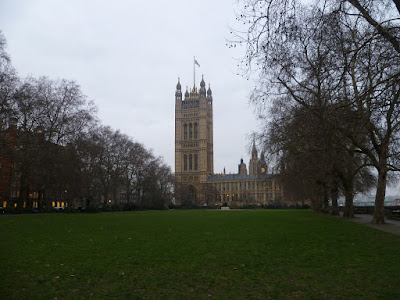 Posted by Dave Morrison at 01:29 No comments: