The usual early start saw me heading into the City at 4.45am, with the games lanes now open it was back too normality in London, I for one, and like a lot of others was very impressed with the overall Olympic package, I think we did ourselves proud.

As dawn came it promised to be a good morning and so it proved, the only bird I could find as the light became clearer was the Tiercel roosting on Middle Tower, of the Falcon and juvenile(s) there was no sign. At 6.25a.m the Tiercel started to e-chup, as he did so 2 juveniles came into view, the female and one of the males. As they appeared so did the Falcon calling rather stressfully and then began climbing up to the juvenile female, who rather strangely made a very hurried retreat back along the river. I know that they have likely all dispersed and probably come back now and then but it was a very agitated reaction to the juvenile female, especially as she ignored the juvenile male who landed next to the Tiercel who was still very agaitated.Shortly after this, after seeing off the female juvenile the adult Falcon again appeared and took up position on Big Ben. 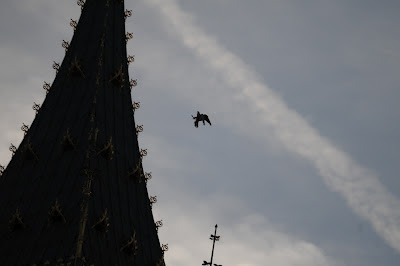 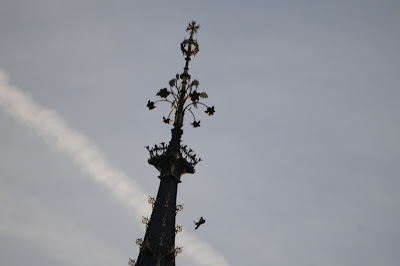 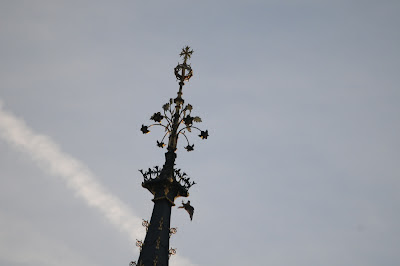 I strongly suspect that this was juvenile female was not hers and was from another fledged site in London going by the pairs reaction, presently all settled down. Another scenario could be that it was there juvenile and they were ‘weaning’ her out, possibly the juvenile male had just not got the message yet, like last year they may well stop feeding him.
For the next 10 minutes the juvenile repeatedly called for food and presently it got through to the Tiercel who flew north, I then settled down to watch the juvenile as the Falcon was set in stone and looked like doing nothing.

During the remainder of the morning the juv made 3 rather clumsy attempts to catch prey, 2 attempts were made on Ring Necked Parakeets, 2 passing groups, they just split, went low and then out turned him before he gave up. The final attempt started with a passing Kestrel making a stoop at the perched juvenile, who then in true peregrine fashion, went after the little mouse hawk probably half in play and half in catch prey ‘mode’. At one point I did see him make a proper grab for the Kestrel but as with the Parakeets the Kestrel easily evaded him, in truth I would I was glad that he didn’t get the Kestrel being a long term favourite. 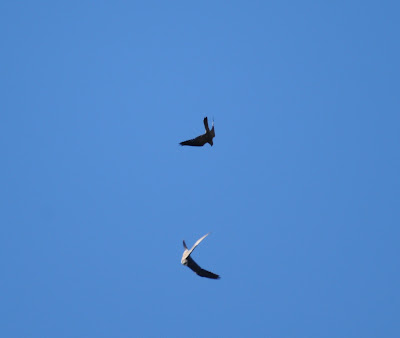 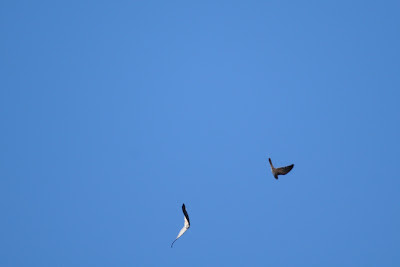 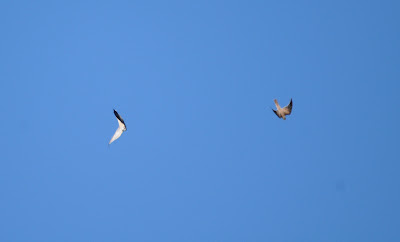 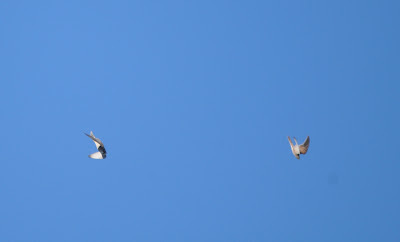 So it now remains how long he will stay, in 2011 a juvenile male stayed well into October coming and going, the adults were not allowing him any prey, it may well be that this male is not so confident as yet either. It’s like school, there are fast and slow learners, it might just take him a little longer judging by earlier hunting activities. 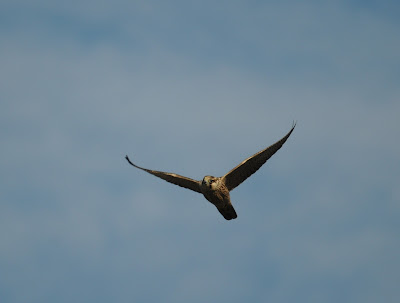 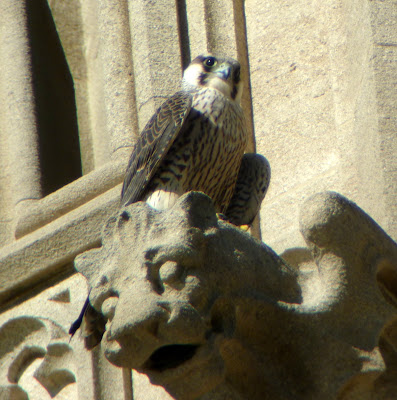 In the end both adult Falcon and the juvenile went simultaneously north around 9.00am flying strongly, no doubt the Tiercel had very likely taken prey further afield, first come first serve so to speak, time for me to go.

Posted by Dave Morrison at 00:01 No comments:

One of the questions that I get asked quite a lot is what are they feeding on in London, the obvious one is feral pigeon, this forms around 90-95% of their diet, this is mainly down to the fact that there are so many of them. Additionally there flight patterns suit the Peregrines as they tend to move around a lot, particularly at dawn when they move to their feeding grounds which may be quite a distance away.
For a number of years I have been doing prey collections at individual sites in London and these have been sent off for analysis to Ed Drewitt in Bristol, he very kindly identifies one and all.
The top 3 in London in order taken seem to be – Feral Pigeon, Starling and Ring Necked Parakeet, it makes sense as all 3 are pretty abundant, however Black Headed Gull is as well but this is never taken as much as the others.Carrying size and possible flavour of meat may be an issue?


Over the years he has identified some unusual prey, Hen Pheasant tops the list at one site, feathers only, don’t ask me how as even a Falcon could surely not carry it. On this particular site, the nest area is 40 metres up, the only way would have been at night which is when the ‘weak’ flyers move round, she likely intercepted it above the nest area or close and then just glided in. Alternatively she/he again could have hit it at night, failed to hold or carry and feathers just drifted down onto the structure.

I checked a site over the weekend and collected up the prey, there were the obvious feral pigeons, at least 4 or 5 Starlings, perhaps 3 or 4 Ring Necked Parakeets, 2 Black Headed Gulls, a Black Tailed Godwit and a Moorhen. More will no doubt come to light when Ed checks the various feathers and bones.

One thing that Peregrines are not is house proud; on this particular site the nest box was scrubbed and cleaned for 2012 prior to breeding as I do with all the boxes. Looking at it and the surrounding area as usual resembled a bit of a pig sty after the season’s breeding, it is the same everywhere. I will know clean it out and scrub thoroughly to get rid of any parasites and then in Jan/Feb give it a final clean out prior to starting all over again.
I have recently nearly finished one which will be shortly off to pastures new, this is the walk in version that are more successful than the old Hawk and Owl design with a lip and a ledge. You may think they are big but when you have an adult Falcon or Tiercel and up to 4, sometimes 5 full grown juveniles it has to be big to allow them to exercise. 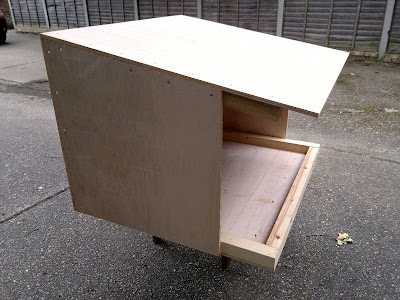 This is all important on that maiden flight, if they have not the room to exercise and build wing strength and muscle it is sometimes inevitable that 1 or more will ground. Sometimes even with a good exercise area a combination of events can ground them, weather on the day(lack of wind) or even shocked into flight by an adult, such was the case with the pair that Nathalie monitors at Fulham in 2011.

So much for my last post when I said I will visit on the weekend of the 28th/29th, I couldn’t get anywhere near Parliament due to the Olympic Cycling but in the end I managed a visit on Saturday 4th.
Like everyone else I have been caught up with the Olympics, it has been a rollercoaster ride of patriotism and emotion; I thought the opening ceremony was quite incredible. As I am writing this I have just seen Jennifer Ellis, Greg Rutherford and Mo Farah all take gold this evening, this along with 2 rowing events and the girls pursuit cycling produced another 3 gold’s in the afternoon, great stuff. I was glued to the tele and cheering on with the best of them, 6 gold medals in a day and still we lost the penalty shootout in the football, something’s never change.
I arrived around 5.15am at Parliament, traffic as you would expect was light at this time but I had decided to limit the visit as the Triathlon was coming pretty close this morning. I could already see Stewards starting to appear even at that time, the Olympics were in town.
Checking Victoria Tower produced a juvenile male and the adult Falcon, the light was getting better and she went straight up to Big Ben and began to hunt. Big Bens ‘golden crown’ gives them a 360 degree all round view and also the height to gain speed to catch prey. 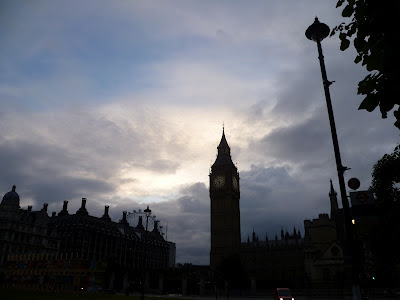 I decided to watch from Westminster Bridge as the sun was partially behind me and I could possibly get some half decent shots.
At 5.50am she took a feral pigeon, I managed to get one shot of it but none too clever, the juvenile as expected intercepted her and took the prey from her and was last seen heading into Central London no doubt to get away from his siblings, especially the bigger female.
After this she continued hunting at it was not until 6.40am when she again took prey, again she was intercepted by another male juvenile, he took a small passerine from her and then as before with the 1st juvenile, disappeared. Where he came from I don’t know, I had already checked Victoria Palace, as normal with juveniles, as soon as there is food about they come out of the woodwork. 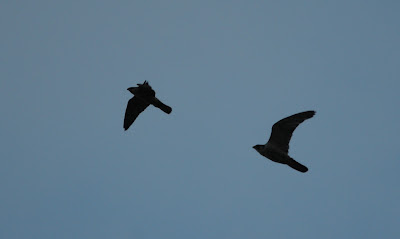 After this the adult female laid up and rested on Victoria Palace, she most likely had stashed prey somewhere but was probably waiting until the coast was clear before she fed.
Of the adult Tiercel and the remaining juvenile male and female there was no sign, I expect that all were together either on or near the nest site. 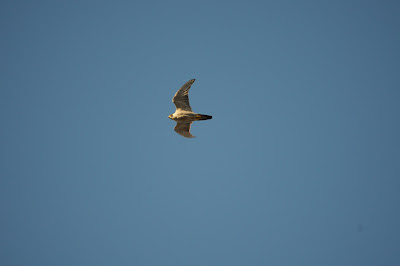 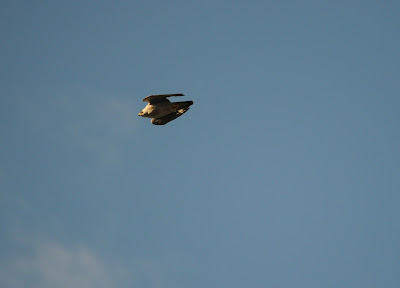 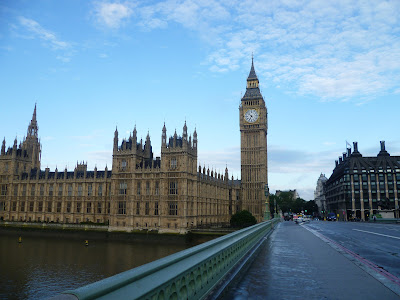 A good but brief visit with most of the time spent on Westminster Bridge, I did manage to get a few shots but I am now finding I need more range and light from my Lens, a new one is on the horizon hopefully.

Posted by Dave Morrison at 10:50 No comments: