Masters of the Wind


On Sunday despite the very strong wind conditions I visited a site in London to check up on a pair; early morning rain soon gave way to some welcome sunshine. If you have watched peregrines before you will know they revel in these conditions, flying becomes effortless and at times they hold position against the wind with hardly a wing beat recalling Common Buzzard.

This particular pair fledged 2 juveniles this year, both of them, a male and female have been gone for well over a month, on Sunday the male tried to return and beg for food. Of course this could be another male juvenile from another site, hard to tell, but going on the adults reactions, there was a certain level of acceptance, I think it was there offspring. If it wasn’t I am pretty sure that they would have driven him off as soon as he came into their territory.


All was ok until the juvenile tried to muscle in on the Tiercel, he had just taken a feral pigeon, the Falcon seeing this became very aggressive, I suspect as the Tiercel usually hands prey to her in most circumstances, she saw her meal being threatened. Additionally from her reaction afterwards, he was obviously not welcome anymore, in short time to go.
She then went after him and pursued him high and low, relentlessly chasing him and both were lost to view, she returned shortly later and I thought that was it. Remarkably, he is obviously a stubborn juvenile, he came back, the process was again repeated with even more gusto by the Falcon. He was seen off and despite me looking for him for the next hour he never returned, he had undoubtedly got the message, hopefully he will get through his 1st winter. 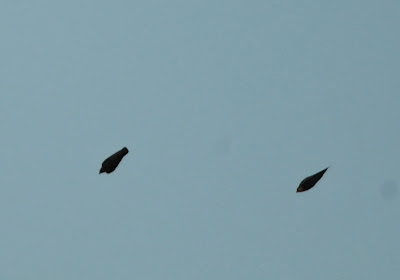 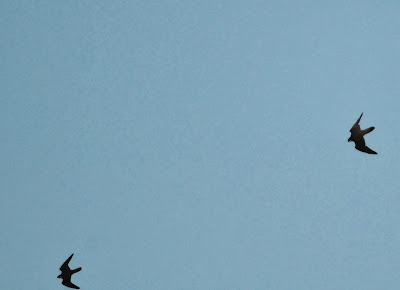 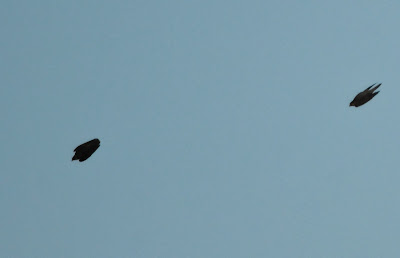 Posted by Dave Morrison at 02:06 No comments:


I photographed this male peregrine the other day going through all the usual contortions trying to bring a pellet up. 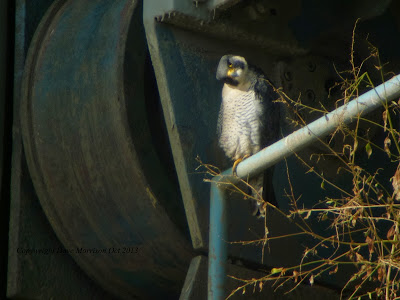 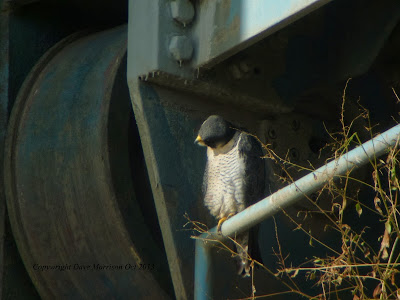 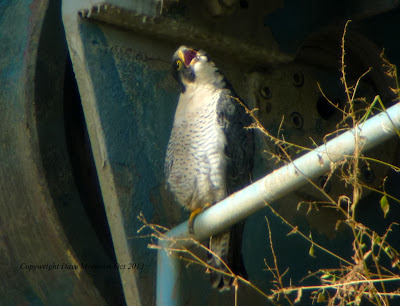 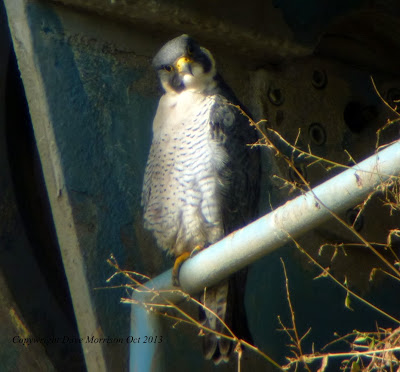 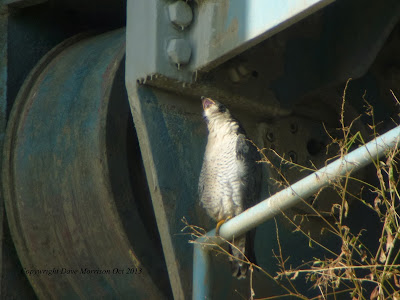 Posted by Dave Morrison at 02:33 No comments:

Regular readers of this blog will know that a few years back a new nest box was installed on Victoria Tower, the purpose as you know to try and encourage them to obviously breed at Parliament. Peregrines being peregrines and the unpredictable creatures what they are, so far the box has been ignored although I have seen talon marks on the lip and disturbance in the substrate, I suspect this was possibly from one of last or the previous year’s juveniles.
The box was made by Brunel University from cardboard composite and is big enough to support a family of juveniles, at the time it was installed, position and more importantly the height were limited to basically one area. Much of the positioning, like some others sites is to avoid licensing issues if accepted, in many cases like Parliament it is not always ideally situated.


Having watched them for a number of years you get to know what height they are comfortable at, in short they need a buffer zone between them and any potential disturbance below, this is very important. Although looking from Victoria Gardens Park it does look quite highish, there is another structure directly below which does foreshorten the clearance, basically it would be better higher.
I think this is one of the key area’s why it has not been accepted, that and the fact that they already had an established nest site on another building. That is always going to be a big carrot to overcome, it is a successful nest site even though they failed this year, it is imprinted on them.

In the near future their nest site building which is right at the edge of their territory is due to be demolished, where will they turn to then, it very much looks like the building that replaces it will likely not be ‘peregrine friendly’. In terms of suitability much of London’s modern architecture structures are totally unsuitable with many being of the glass/metal design, sheer faced with not a ledge/niche in sight. This make them totally unsuitable for fledging 1st flight juveniles who invariably will lose height in that jump into the unknown, if there is nowhere to land lower down it puts them in danger, at the very least to low for the adults to feed them.

If the box cannot be raised at Parliament, and this is highly unlikely, there is another building which I know they use which meets all the peregrine friendly credentials, I will be approaching them shortly.
Having said all that and knowing how, at times they can be totally unorthodox, you only have to look at this year’s change of nest site position as an example, they are just as likely to be sitting in the parliament nest box now to prove me wrong!

Nature is nature and it will always do its own thing and go its own way, as a great man once said, peregrines never read the script.

Posted by Dave Morrison at 23:15 No comments:

It’s been a while since I last visited and I have neglected the pair somewhat so this morning’s outing was a catch up.
I arrived too early(or so I thought) as it was still darkish at 6.40am, parking round the corner I then headed for my usual position in the middle so I could cover all exits from possible roost spots. As I walked over the green I heard the calling of a duck, I then looked ahead and got quite a shock. Coming over the roundabout about 15 metres up obviously struggling for height was the female peregrine, she was carrying the source of the noise, a large duck. In the semi darkness the prey looked enormous, from size it was definitely not a Teal(usual duck prey) but larger, as she passed me overhead she could no longer hold the struggling quacking bird and down it came next to Victoria Tower.
In truth as it came flapping down in the gloom my first thoughts maybe it wasn't a duck but possibly a Coot.
I crossed over the road and eventually located the bird in front of Sovereigns Gate, in appearance and shape it looked good for a female Pochard but it seemed too dark, good news that it was alive and moving well.


After a brief chase I caught it, gave it a look over in the light, it looked ok and was injury free so I made my way into Victoria Garden Park and then to the Thames. As luck would have it the tide was still up, the bird was lively so I released it on the river, it flew good and landed about 20 metres out.

I watched it for a while, it seemed none the worse for wear and started to swim upriver I am glad to say. 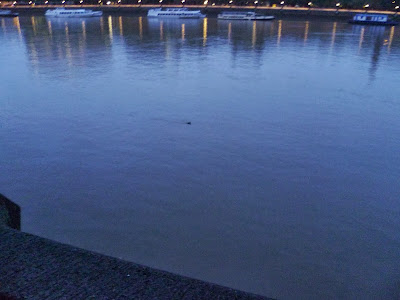 I very much suspect that she caught it over nearby St.James Park; they fly in this direction quite a lot, what it does go to show again, peregrines as we know are hunting in the early hours/night. With darkness they have all the advantages, I suspect Redwings will start to show soon.
After this I waited for the morning to arrive such as it was, another cloudy day, she flew to the Abbey first and then went straight up to Big Ben to try her luck again. 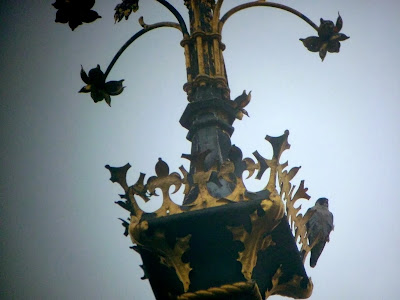 I watched her for another hour, 3 hunts all failed, each time she returned to the crown of Big Ben, of the Tiercel there was no sign throughout the morning, not even from roost, unusual.

I had arranged to meet Steve Swinney, the idea being to retrieve the bird from the wire somehow, no one wants to see it hanging there like that all the time. We had exhausted other avenues; the cables were live between the telegraph poles, so in the end we decided to get it off ourselves.
In the end Steve came up with the idea of a football, with so much current running through it, it would have been very dangerous to attempt to knock it off with a long pole of sorts. The bird was hanging from its neck as per the previous photos; you would think it would come off quite easily, wrong.

In the end it took around 12 throws each, it was surprisingly well up there before it came away, unfortunately the head remained and the body came down which leads me to think that it may have suffered a massive belt of electricity.
Looking at the bird showed no signs of foul play externally and there was nothing to suggest in the habitat that it was found in that anything untoward had happened, it looks a tragic accident.
The bird has now been sent to the Predatory Bird Monitoring Scheme for an autopsy.

Posted by Dave Morrison at 15:56 No comments:

The photos below rather sadly show a juvenile peregrine which looks as if it has possibly died from collision, having said that I would have expected the bird to have ended up on the ground rather than entwined around its neck. Another possibility is that it touched both cables but I would have expected it to be burnt from this.

However it died it is a sad sight, it is unringed so it could be from anywhere.
Thanks go to Steve Swinney for letting me know and also allowing me to use his photos.
Hopefully we can soon get it removed and it can then be sent off to determine cause of death. 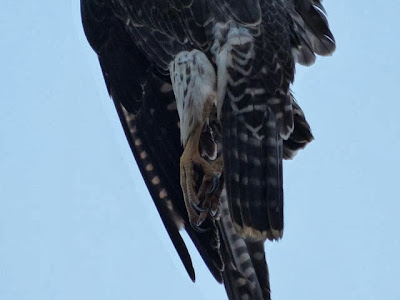 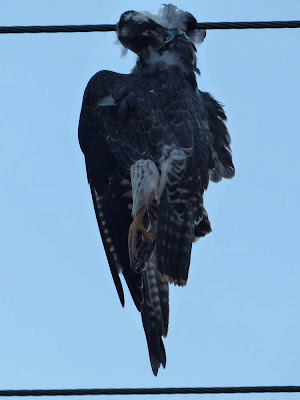 I was sent the photos below by Colin Mackenzie – Grieve from the Old Hall Marshes area, he has very kindly allowed me to use them.
As you can see at first glance the bird appears to be one and the same as the East London bird, size, colour and shape all match but on closer examination it appears there are subtle differences. 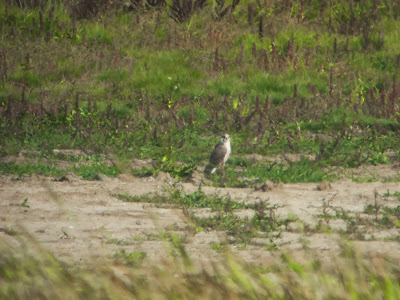 This bird again looks to be a Saker/Gyr hybrid, the one difference that seems more obvious is that Colin’s bird has a slight moustachial stripe which is characteristic of Saker but only has slight streaking to the underparts, the EL bird seems to have more underside streaking.
The EL bird also has pale fringing to the feathers which do not seem apparent in the Essex bird, by and large it looks as if there are 2 out there. 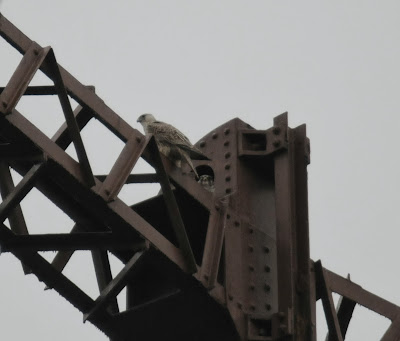 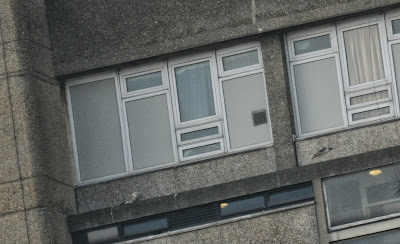 I am not sure how common Saker/Gyrs are amongst Falconers but looking at them they could be family related?

Posted by Dave Morrison at 04:30 No comments: