During the week I watched a site, the pair have had another successful year and have fledged 4 juveniles as per 2013.
During the course of the morning the adult Falcon was intercepted quite away out with prey, as you know with juveniles, it is first come, first serve for a food pass.

Below shows a sequence of photos showing 2 juvenile females squabbling over the prey, in this case a Ring Necked Parakeet, with the other 2 siblings waiting in the wings. 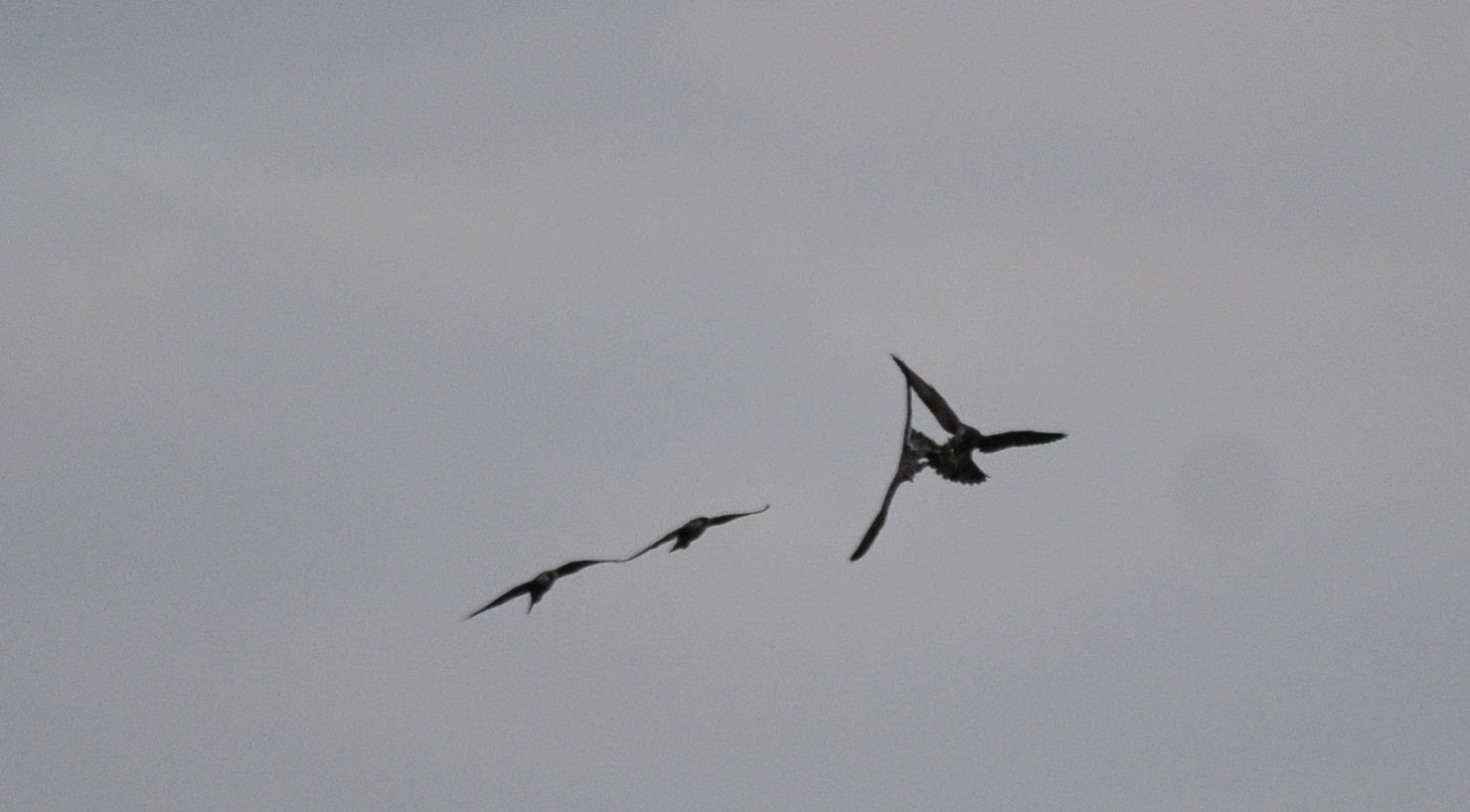 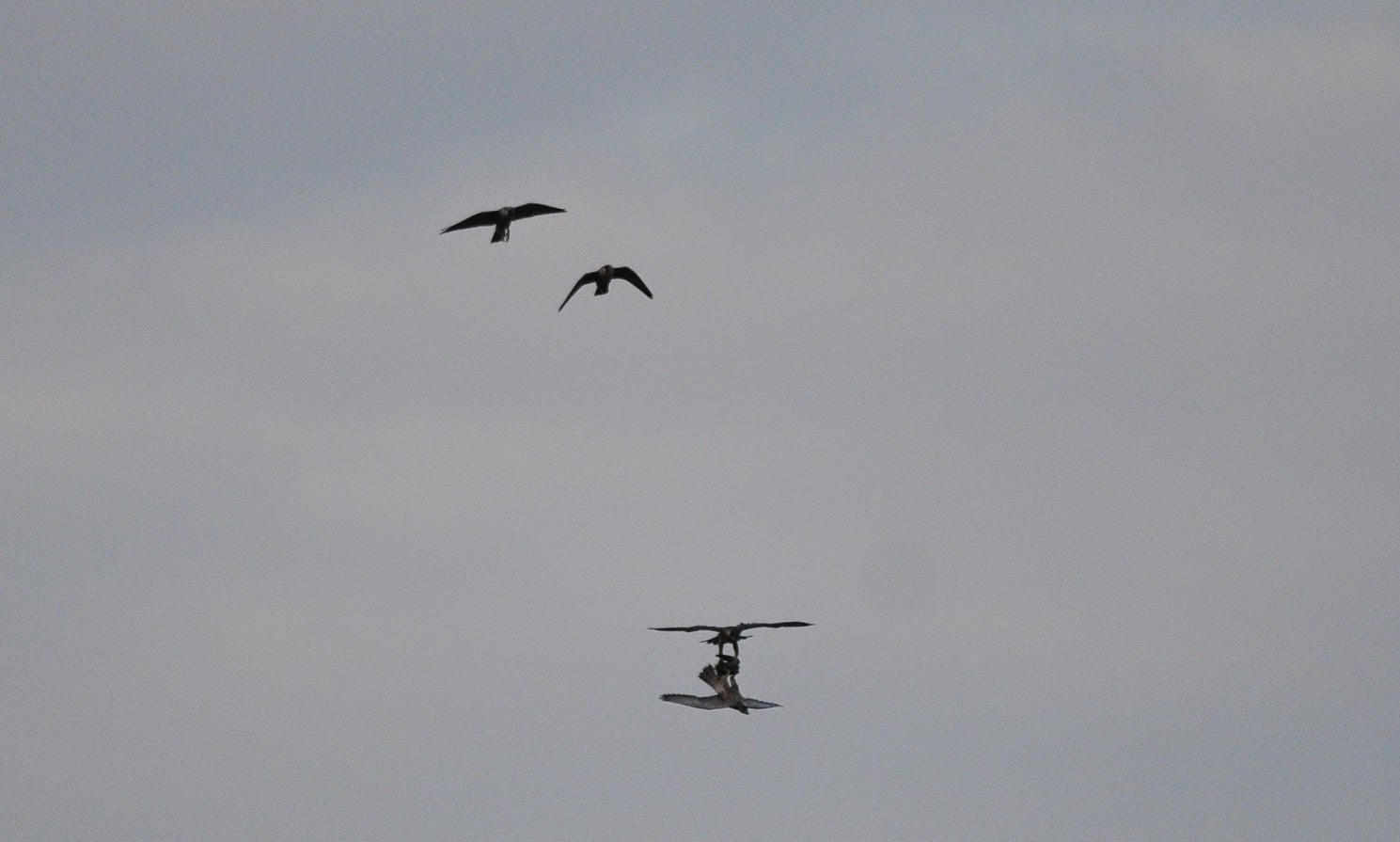 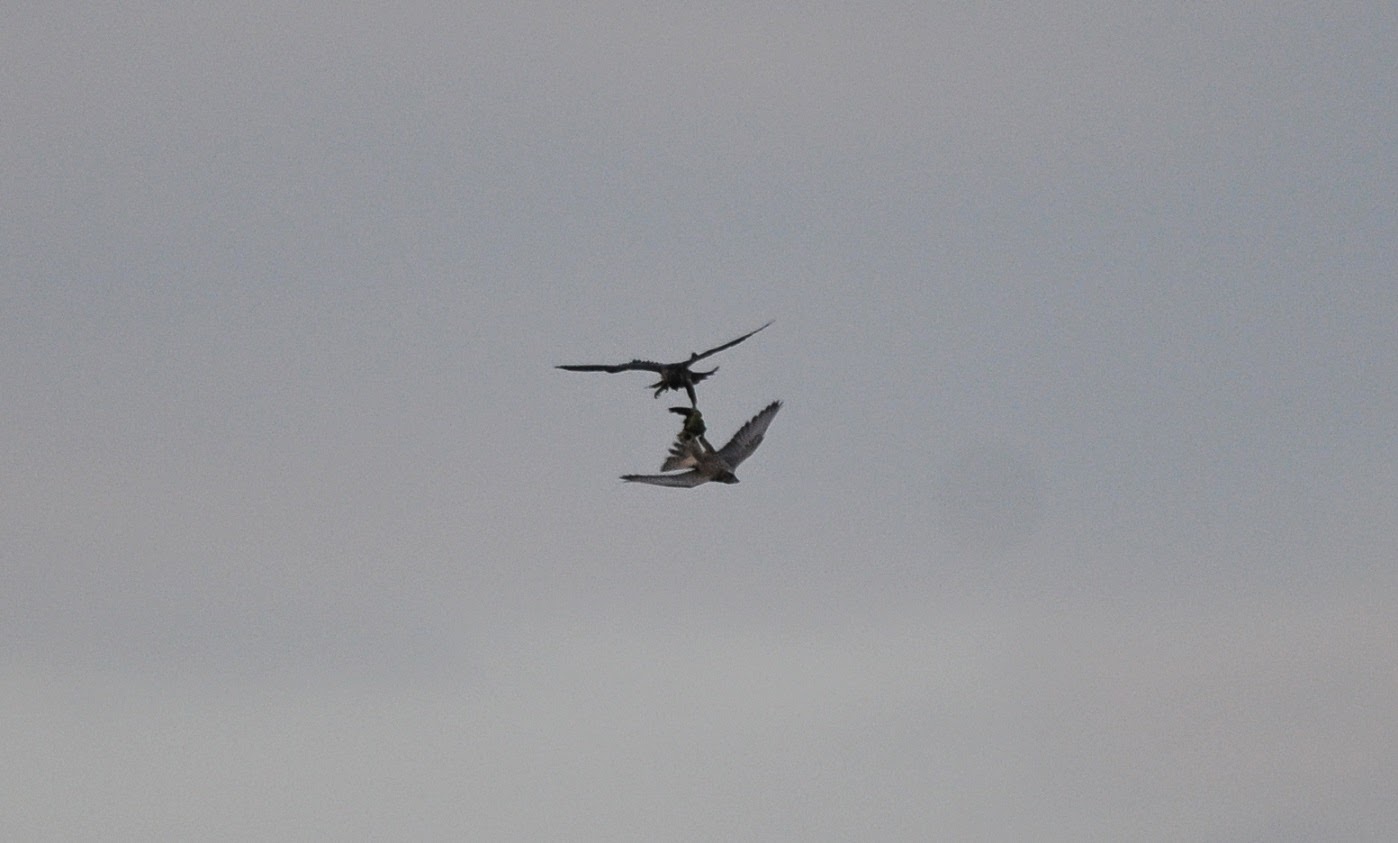 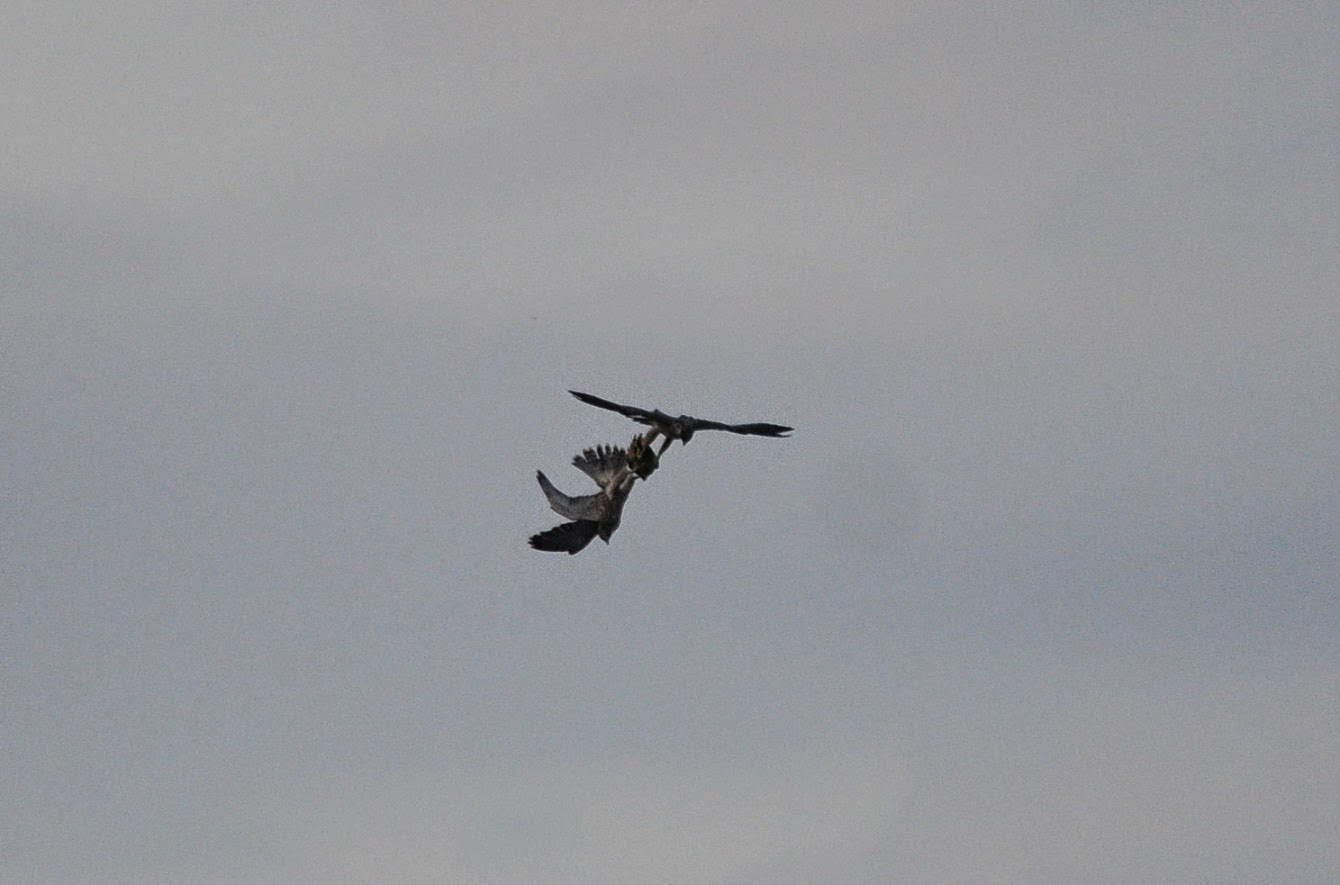 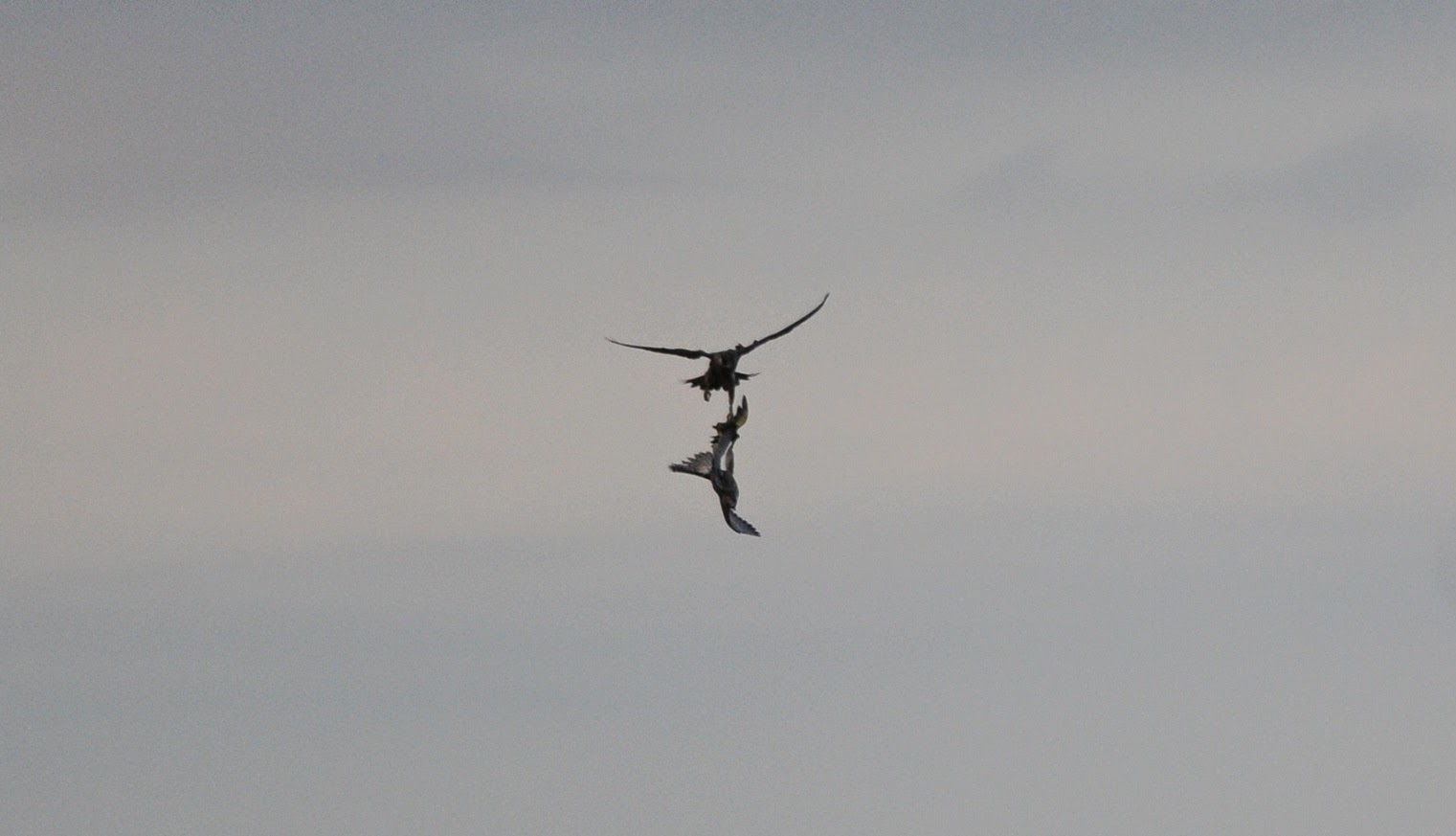 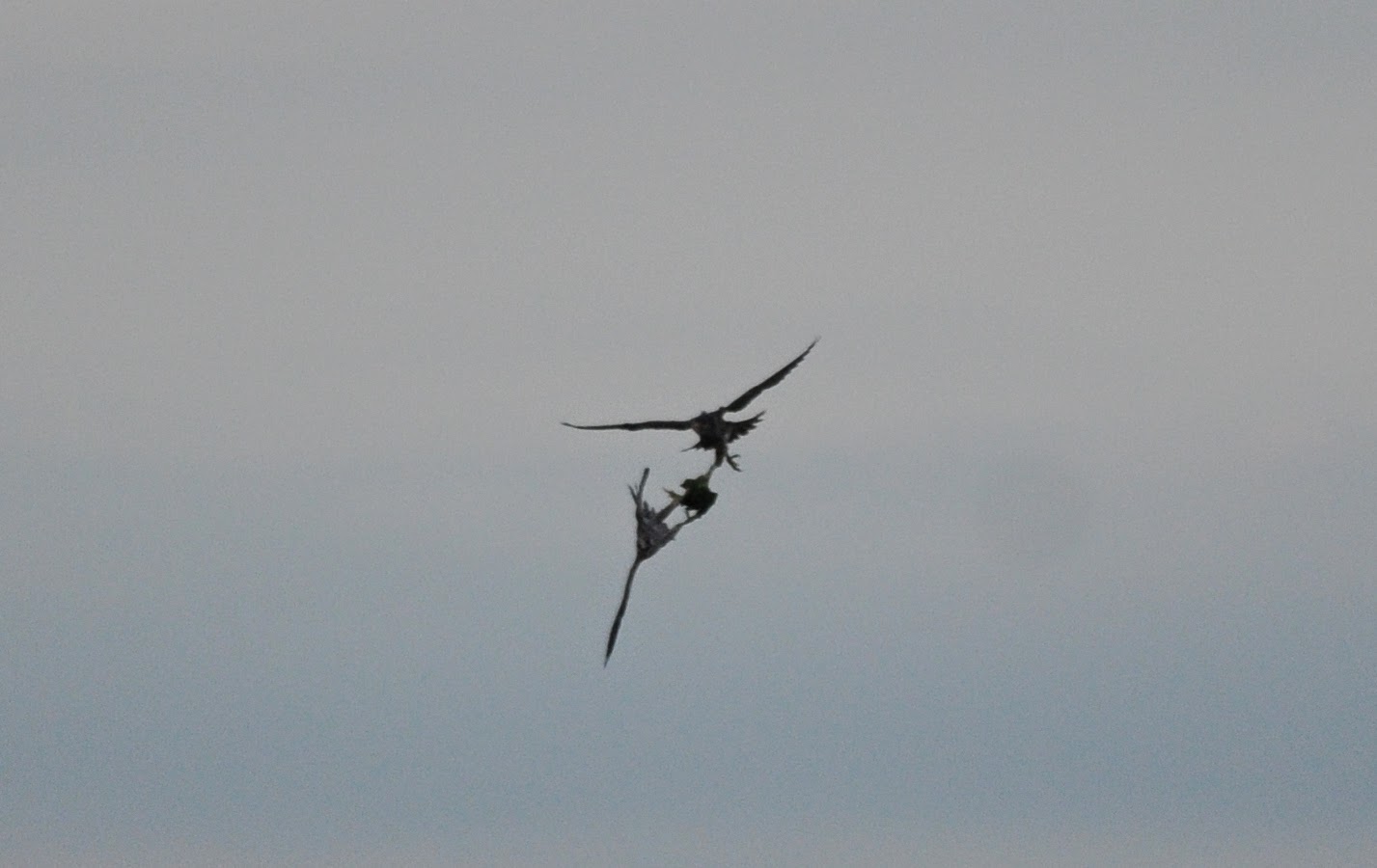 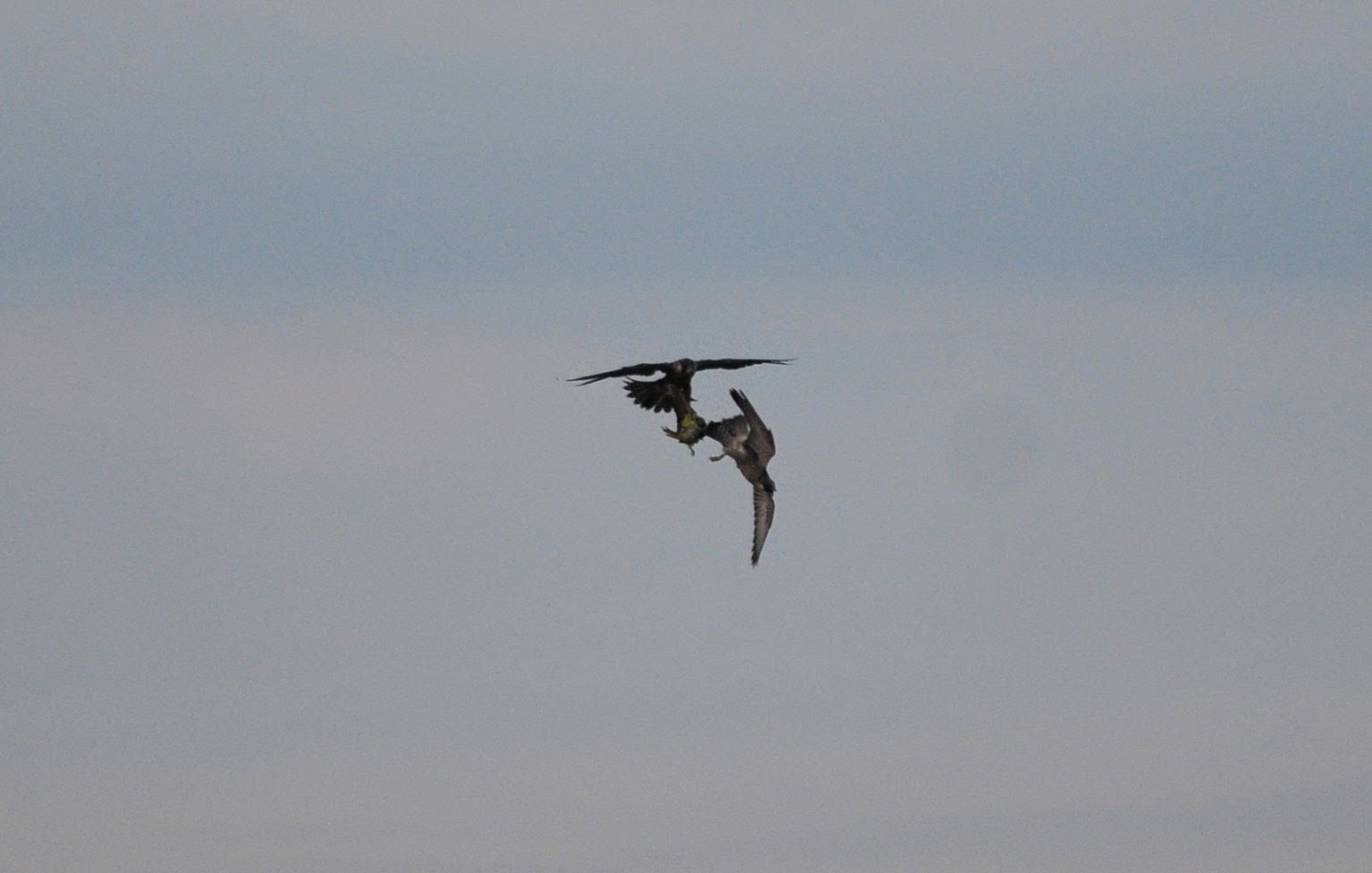 Posted by Dave Morrison at 02:06 No comments:


From the information I am gleaning from the rest of the country, it appears not to have been such a productive year in 2014, particularly in the historically persecuted areas up north and above.

Without doubt it is easier protecting them in London where you can secure buildings/structures and can ‘manage’ them easier, albeit less at fledging time.

Make no mistake urban peregrines due to the Schedule 1 have to be managed, it is all about forming a good relationship with the Building/Structure owners before and after the licence period of February 1st too around the end of June/mid July in London.
I am very lucky that in all the people I work/liaise with are good helpful people and safeguard the birds and will make sure they are not disturbed, I know at times it can be very difficult and not easy for them when they need roof access.

Thanks go to them all for without there co operation and good will, their respective pairs wouldn't achieve half the success attained over the years in successful breeding and fledging. 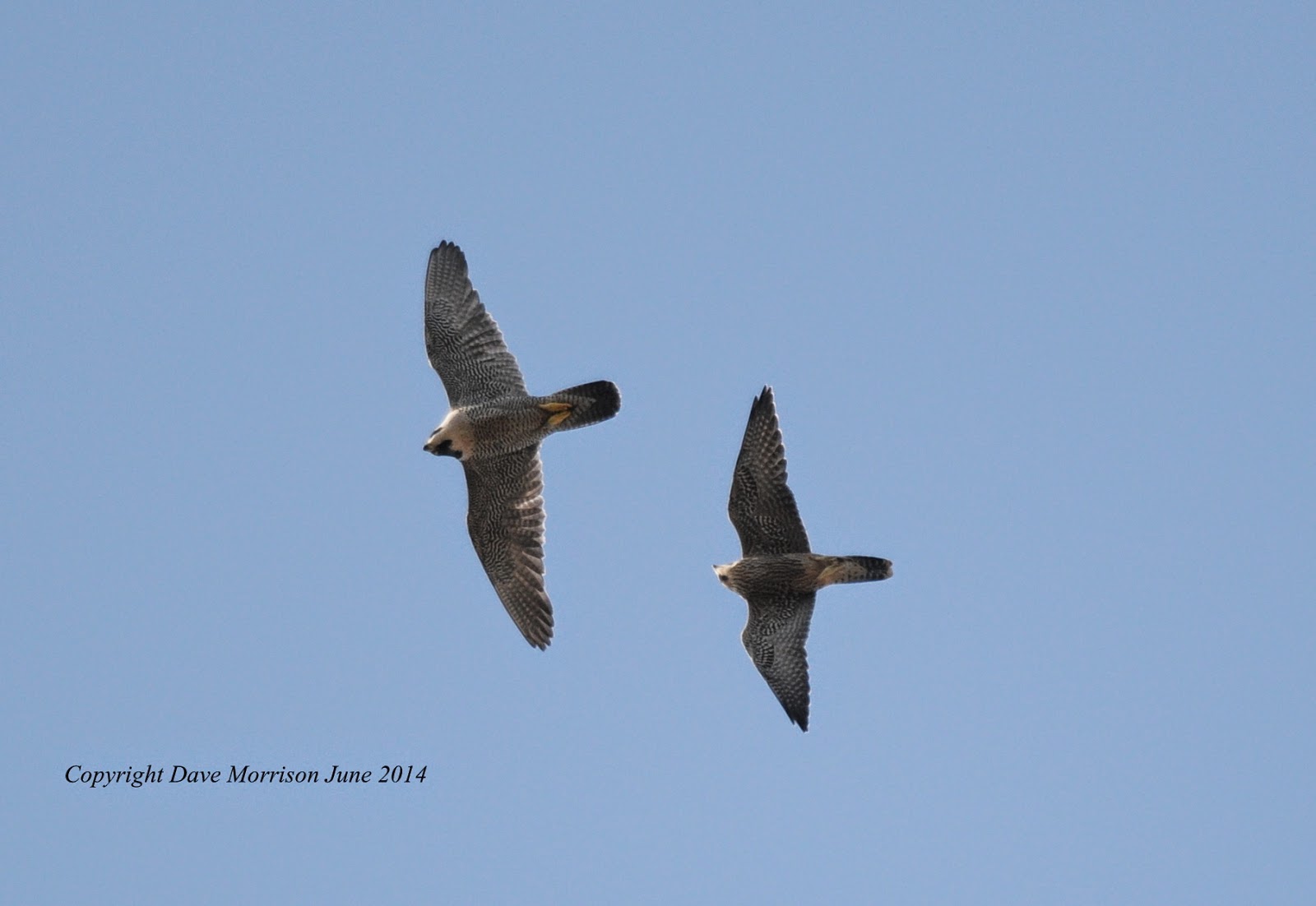 This year of the 10 pairs that I keep an eye on and monitor 9 pairs have been successful and have produced 25 juveniles, just under 3 a pair so a good return for all those concerned for their hard work.


The success story this year along with Battersea Power Station has been the Flooded out site, this gave me a lot of pleasure, not so much at the time when the nest site was under 8 inches of water and the pair simply disappeared, I thought that was it.

As the site was on CCTV I was watching constantly as were others, the pair did return and glad to say that successful breeding took place and 3 juveniles, 2 females and a male fledged.

As per usual with urban peregrines it was not straightforward and one grounded, a good system was in place with staff and I got her back up.


After last year’s success I was hoping more of the same but unfortunately not to be, this is the one failure of the year, no reason, she was incubating, perhaps a fertility issue?
I photographed her in Mid April sitting tight, obviously incubating and then made quite a few subsequent visits in early to mid May. She was incubating still right up to May 16th but kept getting up; I also noted her leaving the box unattended.

Realising that there were likely no chicks I kept monitoring before deciding to go up there to check for unhatched eggs, not surprisingly the nest box was empty.

I suspect that she may have eaten them when they failed to hatch; it is easy to read more into it but this site is pretty impregnable.

There will be failures, this is a natural process, it may well be that one of them is getting a little long in the tooth, whichever bird it is I will keep an eye open for any change in adults.

Posted by Dave Morrison at 16:15 No comments:


Its fair to say that the last few weeks have been manic, the now seemingly annual earlier fledging times have spread it out but it is hard covering a lot of sites.

The problem comes from the fact that the sites must remain undisclosed, a majority anyway, with increasing pairs how do you cover them all at fledging time?

It’s getting to the point with the numbers where I am questioning fledging time; do the undoubted risks in an urban site out way the non disclosure in publicising it?
There is no doubt that each site at breeding time needs a nucleus of local people involved to cover the grounding issue but how can people get involved if they don’t know there are breeding peregrines on their doorsteps?

To cover a site at fledging time you need a number of people involved, the more the merrier, each group can do a few hours each day and then another couple or group takes over. The site is then covered for a number of days, up to a week at times during staggered fledging usually beginning with the males.
If a few people or a group can get involved they will become passionate over them, (trust me I know), especially the chicks as they grow, you then have more people and eyes watching them, if a year round territorial pair on a structure/building, it need not just be the breeding season.

If you are going to publicise, some sites are more secure than others or to put it another way, more user friendly and a nice place to watch peregrines, I stress that I am only talking of the sites that I monitor. Some are not in ideal areas and walking round with expensive Optics and Cameras strapped to my body in the wee hours of dawn is like wearing a sign come and mug me on a couple of sites..
A lot of the night clubs turf out just as I am arriving so not ideal as you can imagine, 99% of people are good natured but there is always one or two who you keep an eye on.

With this in mind how can you ask the public/local people to get involved, let alone stand there covering a nest site building at 5.00am in the morning to cover fledging?

The grounding issue has arisen a few times in the last week or so and these are on sites that there is plenty of exercise space to build wing strength and confidence, alas hot still windless days as we know are not ideal. Of the 5 that come down, I lost one juvenile presumably to a Fox, it just disappeared, the rest were taken back up and given another chance. It’s no coincidence that the days that they fledged and came down were hot and windless. 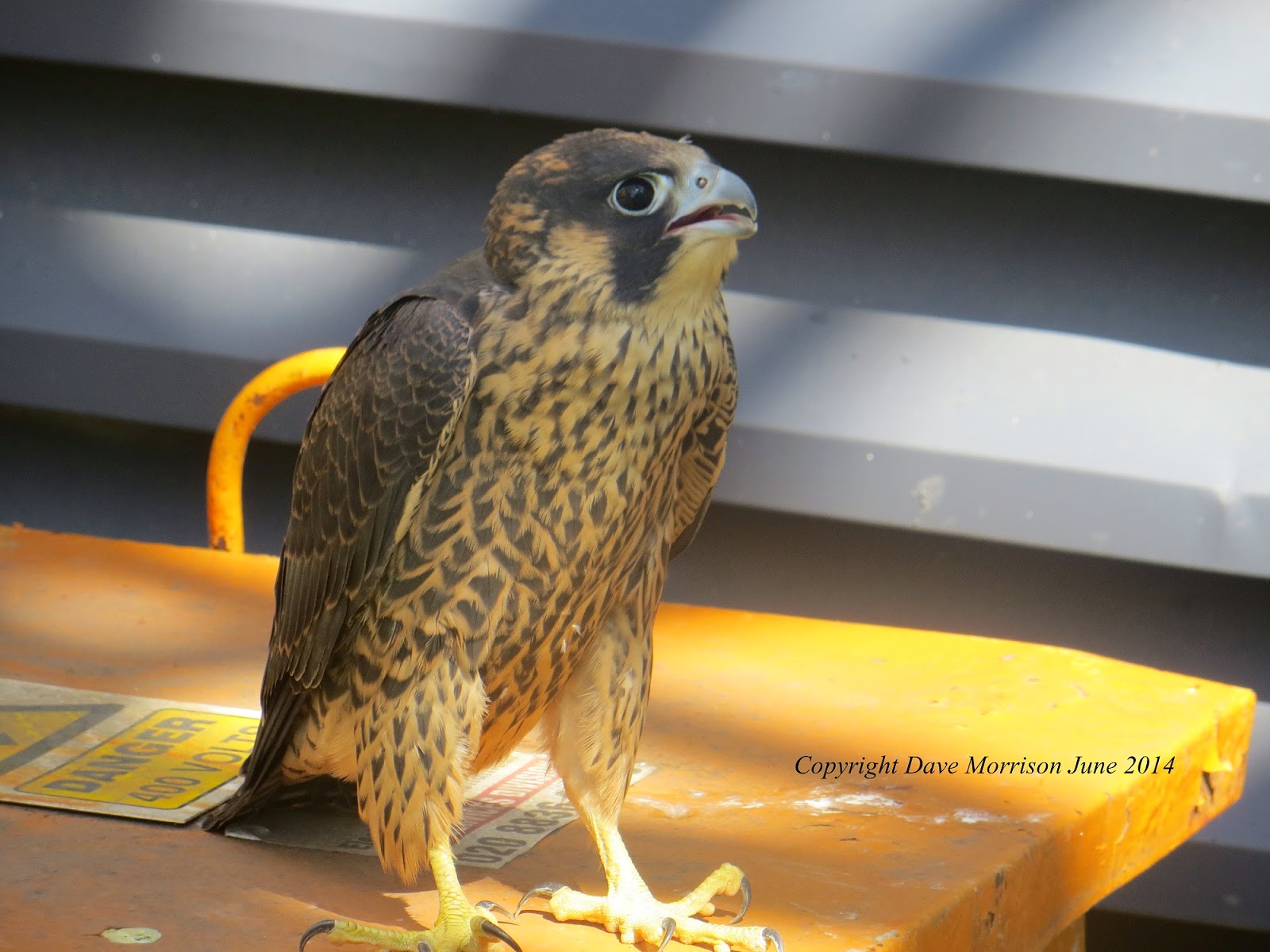 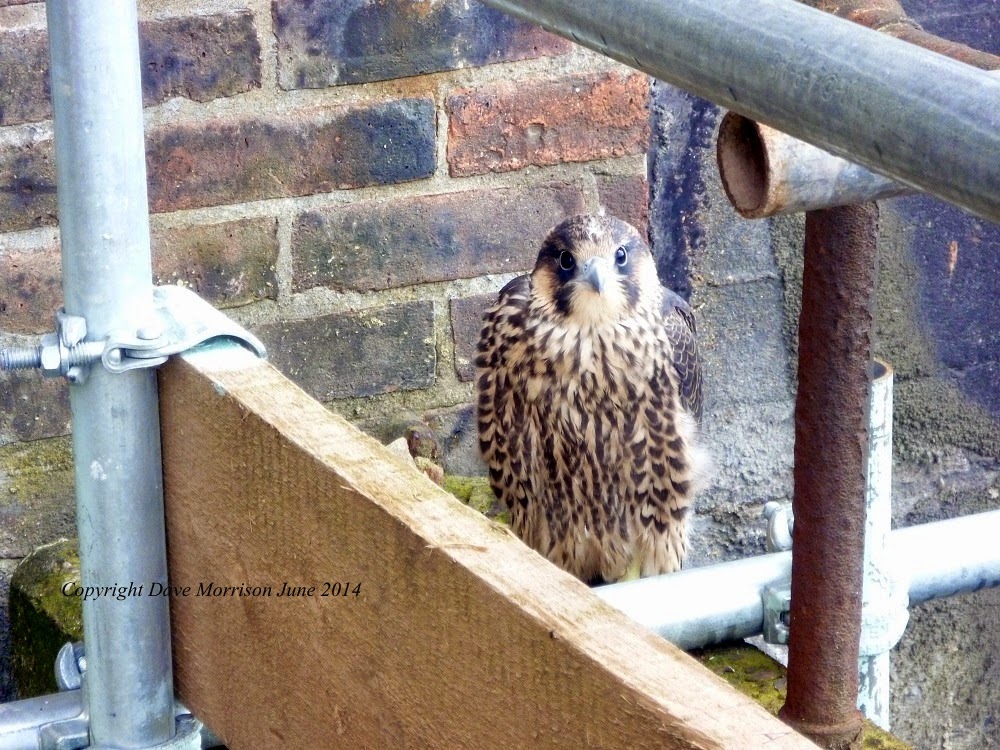 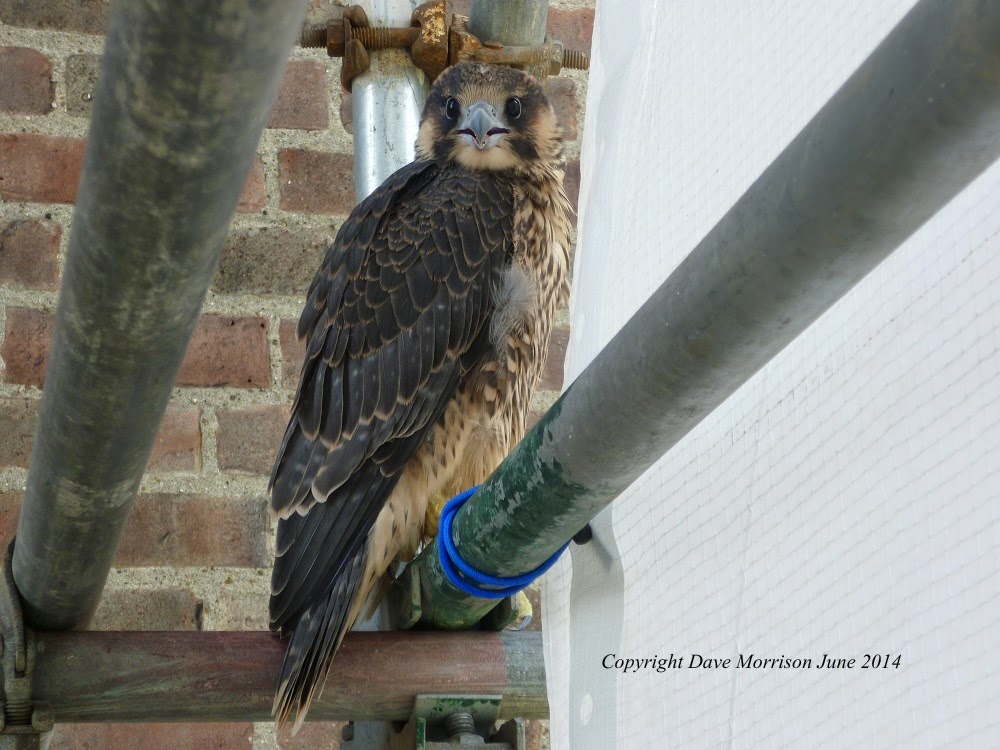 Of the grounded birds, people were watching out for them, the system worked well but without these people there is doubt, given the dangers of an urban site, that they would have got back up under their own steam.

Perhaps if they had time, but the presence of Foxes, even Dogs, Cars on roads, Industry, the urban jungle and landing in areas which they can’t fly out from and being trapped means that the time is not always there.

Posted by Dave Morrison at 22:32 No comments:


For 14 years now I have been coming to the Power Station since locating and confirming the 1st breeding Peregrines in Inner London in 2001, at the time I was a Steel Fixer and working next door.

I undertook and kept a diary and my old mate Des McKenzie very kindly spent a lot of time on it and made it readable and it was entered into the London Bird Report for the year - 2005.

The 1st breeding pair for London were recorded in 1998 by Adrian Dally, 2 juveniles were seen and both had fledged by the end of May, not unusual by today’s standards in London.
Adrian has written a report on it in the Essex Bird report, what was unusual for that time, was the fact that the whole family had left the Mill by the end of May, it seems likely that they had a ‘core’ site which they were unable to breed on. In this case very likely the O2 or the Dome as it was then. What was also unusual is that the adults, if not breeding at the preferred site of the adults (O2), would fly the juveniles back from the Mill to the O2 so early.

In the early days at Battersea, there was much to learn on them, there still is, there’s hardly a week that goes by that I don’t pick up some tit bit of information from the pair, by far most of my learning has come from the birds at Battersea.

Since 2001 I have documented them and studied them, as you can imagine the original Tiercel and Falcon have long gone and if I recall correctly to date, we are on our 3rd Falcon and 2nd Tiercel, a relatively high turnover but being such a prime Thames side site it was always going to attract intruders, to this day nothing has changed.

The Power Station as everyone is aware is an iconic building and I have been very fortunate and privileged to have access since 2000, in that time I have seen a number of changes and from a personnel point of view, it is good to at last see it being developed by Battersea Power Station Development Company Limited. The structure was falling into disrepair and although I enjoyed the solitude of my visits, it is high time the old girl was bought back to its former glory and renovated.

I must stress as I continue, there will now be regular updates, that all opinions and views are my own and in no way whatsoever do these opinions/views have any connection or represent the opinions/views of BPSDC.


This post will be the first of many, hopefully you will find it interesting, especially its wildlife, a unique site for London, it is a grand old building and a hard to miss reminder of a past era.

Posted by Dave Morrison at 17:03 No comments: