As I write this the month has flown by and we are nearly into May (tomorrow), I have obtained the web cam address so the pair can now be followed right up to fledging. She is still sitting tight on her nest tray on the 4 eggs, I expect that they will hatch very soon looking at the dates given earlier in the diary. I have been watching quite a lot over the holiday period and as yet I have not been able to see if any have hatched as yet.

The best bet is when she stands up to shift position, having witnessed this a few times I am still none the wiser, she seems to stay too low, hopefully over the next few days I can confirm if any have hatched.
Address of web cam is http://www.rspb.org.uk/datewithnature/146957-peregrines-at-the-tate-modern
Posted by Dave Morrison at 12:24 No comments:

There is a Peregrine site in London that I visit pretty regular, obviously more so in the breeding season, the pair are in a relatively unique habitat, there are so many feral pigeons in and on the main structure, the pair have little need to hunt further afield.

At my last count, 650 left the roost starting at dawn, departing over a period of an hour with the main surge happening in the first 30 minutes, at the moment it is the Tiercel who is doing the hunting from the structure, it is truly spectacular to observe. 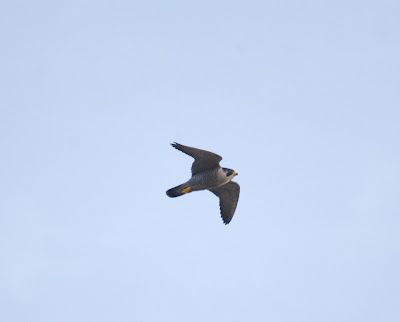 With this many ferals inside, year round breeding takes place, even in mid winter, recent events have shown that the Peregrines have not only adjusted, learnt and taken advantage of another food source, but have also exploited it.

In 2010 I observed the Tiercel fly into the inside of the structure and he then landed on a girder, I did not think at the time, that his positioning was deliberate and intentional, he had already fed and was going to lay up. By coincidence there just happened to be a feral pigeon nest about 2 metres away at the junction of a girder, inside were 2 ¾ grown juveniles. I expected him to lay up as his crop was full, instead he reacted to the presence of the juvenile ferals. He quite simply waddled over to the nest and grabbed one, it was quickly dispatched and then taken to a stash point, obviously for later feeding or prey for the Falcon.

At the time I thought that it was a one off but recently I have seen him flying round the structure, sometimes low down and landing near likely pigeon nest sites, ie – holes, niches and ledges, he was searching, in short, it looks as if he has learnt to exploit it. Carrion Crows, even Magpies I know have this level of intelligence but never suspected Peregrines could learn and adjust there hunting behavior to take advantage of an easy food source.

Recently after observing a nest relief very early a.m, I watched the Falcon emerge and then for 10 minutes she preened, at the end of this she started to head bob as they do, intently looking around, behavior was obviously looking to hunt. I presumed there was no stashed prey available so suspected that she would go up and hunt. As I watched her she took off and disappeared round a corner, and then emerged 2 minutes later with a ½ grown feral pigeon juvenile, she then landed on a wall. The prey was intact and was not already plucked and half eaten.

This made me think, has she learnt from the Tiercel, or vice versa, the area where she retrieved the prey was not a known stashing point of the Tiercels, they have there points which they use regularly. In short, I do not think she retrieved stashed prey so it is possible that she has adapted to an easier food source also.

Certainly very surprising and I cannot recall hearing of this before, as I have said before, no 2 pairs behave the same and they can be totally unpredictable. New behaviour is coming to light all the time in urban pairings, a few years back, who would have thought that they regularly hunt at night to exploit a food source?
Posted by Dave Morrison at 21:44 No comments:

The pair are now on territory on last years nest site and are on eggs, information has very kindly been forwarded to me by Nathalie Mahieu www.nmahieu.blogspot.com who has been watching developments and there progress.

As you have gathered they are on web cam and until today I have not been able to access the site, there is nothing wrong with the link, it is my lack of knowledge when it come to computers, I suddenly hit a brick wall, unfortunately you cant teach an old dog new tricks.

Nathalies progress report is listed below.

There possibly may be more, unless you can see a nest relief or either bird changes position whilst incubating it is very hard to see. Well done to Nathalie for putting the time in and witnessing it. Hopefully everything will go smoothly as per last year.
Last year the 1st egg was laid on April 1st so we are just under a week early, there seems to be no reason for this as other pairs in London this year are late.

I was present at the site on Sunday April 10th and the Tiercel had his hands full with the local Carrion Crows, when a Raptor, especially a large one appears, Crow squabbles and territorial disputes are all forgotten, and mob mentality takes over. None will challenge him in the air near the nest site, being intelligent, they know this is dangerous, if he lands on a building they will land near him and try and intimidate him with numbers.

If all goes well will shortly be putting the webcam on the Blog.
Posted by Dave Morrison at 13:03 No comments: