Ringing and the weekend so far

Pleased to say that the ringing went well with John (Black), we managed to ring 2 broods, both containing 4 a piece, both looked around 3 to 3 ½ weeks old, at this stage it is a little hard to sex them. Saying that there were ones that were slightly larger, you do tend to lean towards these being female but it is still a little early to be definite. The new green rings unfortunately, despite being well warmed up previously, were defective and we broke at least 6 trying to get them on the 1st brood. Consequently there was not enough for the 2nd brood and we had to use the standard Orange rings. 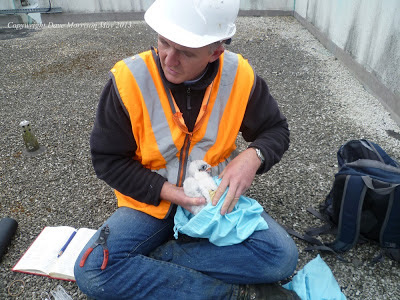 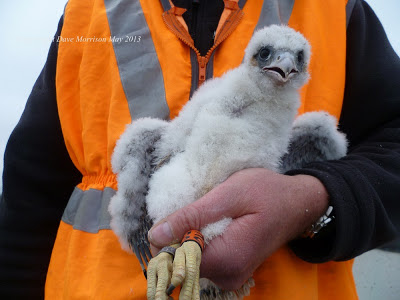 Although we rung 2 sites this year the plan for next year will be to ring 4 or 5, of course this all depends on successful breeding and additionally it can only be done on sites that are accessible and with the Landowners consent. The main thing however is that we are in and out in as short a time as possible with the minimum amount of stress to the family.

I also had some other news this week from the LPP, the Parliament Peregrines, the forerunners for this blog have unfortunately failed this year, I expect them now to return to Parliament. For those who are not aware the pair do not nest at Parliament but instead use another building a mile or 2 away. This building is now scheduled for demolition, there is the possibility that the new structure that replaces it could have an added nest hole/ledge but much depends whether or not the building is ‘peregrine friendly’. The modern design of glass/metal with no ledges available for breeding and fledging juveniles is totally unacceptable.

The week has also been eventful in relocating a pair that went off the map 3 years ago, my thanks go to Nigel Colclough and Mark Thomas of the RSPB for contacting me, after a meeting with the site owners on Friday I learnt that demolition of the site is not scheduled until September. For next year I have 2 other alternative adjacent nest site positions in mind that may well give them a solid long term position.

I was out at dawn on Sunday morning and for once the weather was good, it looks like it will stay this way all over the Bank Holiday. Referring to April 20th blog and the new female I finally got a good look at her today and she is ringed, only a short glimpse but enough to note a metal BTO ring, I could not see if she had a colour ring but with further visits will be able to confirm.


This year is shaping up as not a bad one when it comes to breeding for the pairs that I monitor, I won’t say too much on the subject as it is still early days and I don’t like to tempt the fates.

One issue which has arisen again is early breeding in London, of the pairs, 4 are more advanced and have laid earlier than the normal March 28th to April 3rd laying dates, one pair at least have laid exceptionally early.
The pair in question (see March 10th blog) are looking like they laid over 2 weeks earlier than normal, I visited the site on Sunday May 12th and got my first proper look at them, I would age them around 4 weeks. With this and the others early breeding you look for reasons why, what is it down to, I have mentioned this before, London’s warmer temperatures, if that is the case why are they all not laying early, it is only a minority.
The earlier warm spell around Christmas, I had a pair copulating on December 23rd may have bought some pairs on earlier, why do some respond and not others; additionally it could be a change in pairings. If another bird comes in, beit Tiercel or Falcon and usurps the resident bird is the eagerness to breed and reproduce going to be stronger and more urgent, consequently copulations take place earlier?
Are the early birds younger pairings with normal layers being older birds and more established pairings?

Lots of questions, it will be interesting to see if the trend continues long term.


This year see’s the introduction of a new dark green ring for London, hopefully it will help if seen briefly and aid towards more ringing returns, talking of which I had some sad news recently when one of last year’s juveniles was found dead. The juvenile was one of a pair and was found dead on 22nd April 2013 5km’s from the nest site, it was ringed on 23rd May 2012.Cause of death is given as - entered building – found dead at base of chimney flue, the fact that it met it’s end on a known peregrine breeding site possibly means that there were other circumstances involved. 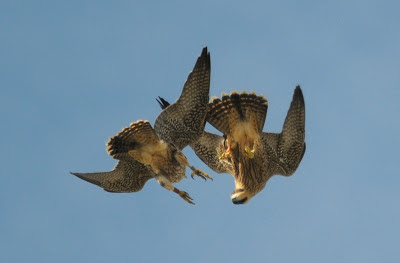 An unfortunate end and I am off to its natal site on Monday morning to ring this year’s juveniles, hopefully they or it will fare better.

Down south pairing have now hatched 2 of their 4 eggs so a great success story for all involved, good reward for everyone’s efforts to assist them.

Off to London again in the morning at dawn, at the moment I am working away 4 days a week so updating when I can.


An early start up London checking sites, great weather so can’t complain for a bank holiday weekend, from what I see Monday is even better.

I checked on the pair that I thought had laid early (see March 10) and this proved well founded as 2 rather large chicks were moving about, there were possibly more as it was warm, they could have well been ‘pancaking’. Just their heads and shoulders were viewable but looking at their heads I would age them around 16 days. Working it back basing it on the longest incubation period of 33 days it was likely that they were laid around March15th/ 17th possibly earlier. It could be that when I saw her on March 10th she was just going through the motions or they are actually older, whatever way you look at it they are certainly earlier than the usual March 28th – April 3rd laying dates. 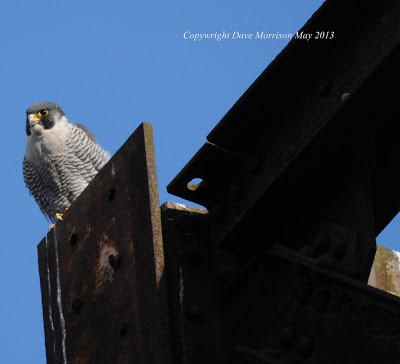 Nathalie’s pair additionally laid earlier than the normal dates and I also confirmed a 3rd pair with young recently, again more advanced than the norm. London pairs seem to be rewriting the record books, the south has always laid earlier so it will be interesting to see it other pairings have followed suit or, is it just down to the milder temperatures and an earlier warm spell ?
I then checked on the Parliament birds at their nest site for an hour, rather worryingly I recorded no activity, they are easy to miss, if she is still incubating and he is off hunting in a favoured area there’s your answer. Just to make sure I then drove to Parliament, no birds recorded which in itself was good news, if they fail they will likely return to Parliament straight away.

I intend to visit the nest site again on Tuesday morning, hopefully everything is ok. 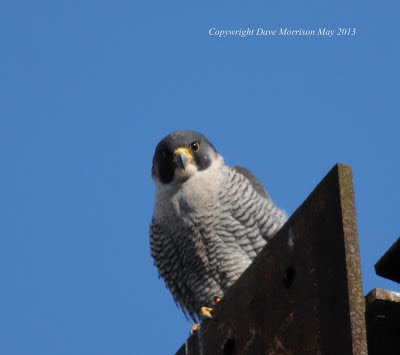 From then on I checked another 3 sites, all sitting tight, looks like it’s going to be a busy fledging time.

Posted by Dave Morrison at 00:39 No comments:


Fair to say that this time of year is pretty manic and this year, fingers crossed is shaping up ok in regard to breeding for the sites that I monitor.

Over the weekend I checked a number of sites and all are looking promising for 2013, the worry is that if they all get their act together and fledge around the same time you simply can’t be in several places at the same time. If you are not aware juvenile peregrines do have a habit of grounding on their maiden flight, if they decide to go on a windless day it can be nerve racking watching that first sortie.


Over the years I have taken a number of juveniles back up, as you can imagine coming down in an urban environment, sometimes on roads is not good for their health, added to this if they come down too low the adults will not come down and feed them. Hunger is a great motivator and most find the will and strength to regain the height lost from that first flight, but there always seems to be one from a brood that will keep you guessing.

Of late I have been working away and this will likely be the case for the next 6 weeks, this is one of the reasons that this is a late posting.

Over the weekend I also met up with Sam Hobson at one site who is helping Ed Drewitt, a friend of mine who checks the prey very kindly for me at a number of sites in London.Ed is writing a new book and Sam is helping out with photography, good to meet Sam and look forward to the new book.

I again had another look for the Hybrids, they have quite simply disappeared, in total I visited the site 3 times over the course of the weekend to no avail.

As I write this we are now into May, this is when the Tiercel peregrine will now be more active as the eggs hatch, and from then on the demand for food increases daily as they grow. It is a good time with much more activity, a time that I look forward to.

Posted by Dave Morrison at 02:08 No comments: