Reverting back to my last Battersea post on August 12th – Tower, 2008 arrived and with it came a change of Falcon, a natural process due to the increase in numbers. It took me a little while to determine that indeed it was a new female as she took to the Tower so well, I didn’t expect anything was amiss or untoward until I noticed that her rest, even roost places were different.

Sure enough before she started her moult I compared photos of her and the 2007 successful breeding female, quite obviously 2 different birds, how I had not noticed I don’t know.

However she had taken to the tower like a duck to water and with successful breeding in the tower the previous year - 2007 I had high hopes for more of the same, especially given that the Falcon was spending a lot of time in it, including roosting when the wind was right. 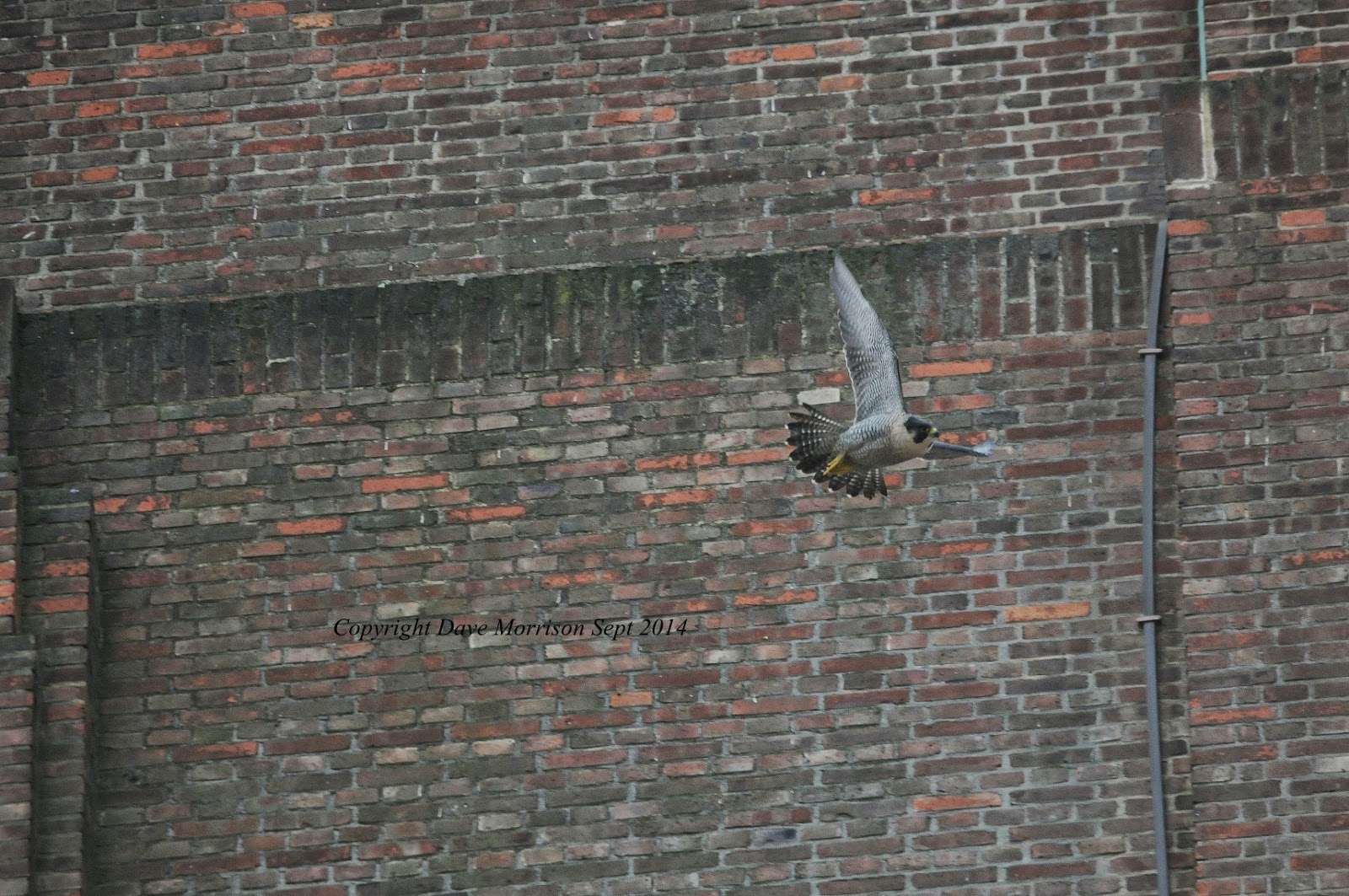 2008 dawned and as mentioned in the previous post, the inevitable happened, for no reason, they ignored the tower and selected a nest site on the Power Station. The tower was still in use by both, the nest box had become a prey stash but egg laying was quite obviously in a ledge on the northern end.

Unfortunately it did not work out as I knew that the ledge had no drainage, after some heavy rain over a 2 day period both birds were on show from then on. Presumed flooding out or even egg rolling, I couldn’t get up there to check but these seemed the likely reasons.

Ownership of the Power Station had changed, I can’t exactly remember when and development was being put forward for the future, the site was to change.

2009 arrived; I watched them - come the end of March - where would they go? Peregrine unpredictability kicked in and they chose the tower, I was over the moon as the Falcon had shown a lot of interest inside the Power Station.

This however proved to be a false dawn despite seeing the Falcon disappear inside the nest box for hours on end, by the 2nd week of April both birds were again on show.

This pattern was then re- enacted over the next few years, the tower was never used again with all attempted breeding inside the Power Station, despite copulation a number of times there was no end result, why?
My thoughts turned to this relatively new female, was she a bit long in the tooth and the issue was fertility? Not uncommon in older birds, perhaps it was this?
Was the Tiercel now too old to actively breed?
I watched them intently throughout each breeding season, I even saw her going through the motions inside, making a scrape and then incubating for long periods but she gave up after a while each year.

Was it an age issue and she was not in breeding condition, were they just going through the motions of breeding?
I had many questions at the time, non breeding was certainly not down to a suitable nest site, there was no disturbance whatsoever and inside the Power Station ledges/niches were plentiful so they didn’t simply not breed due to this. 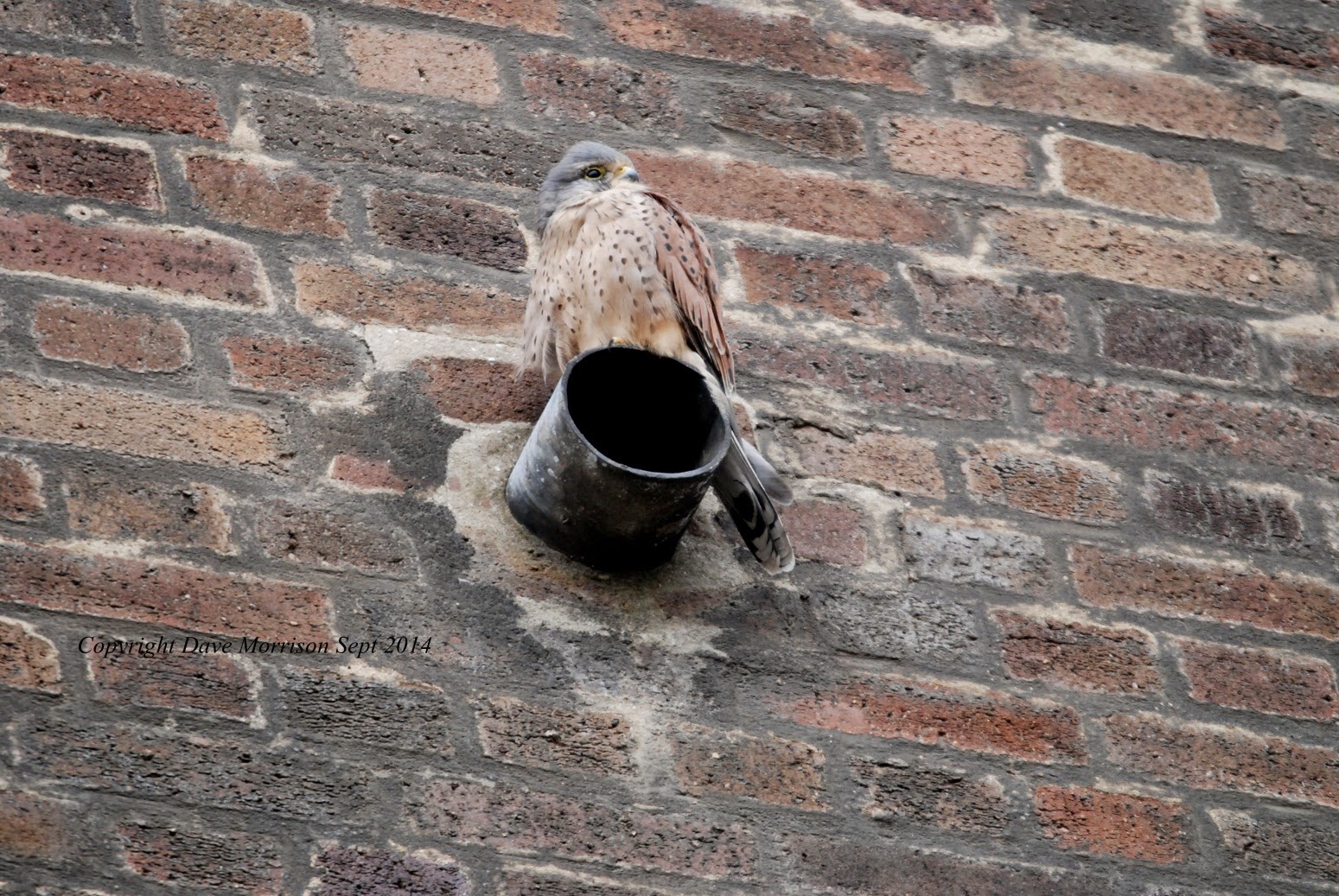 From 2008 until 2012 they failed to breed despite going through the motions each year, I put it down to a fertility issue on the Falcons part, during this time period,5 years, there was also a change in Tiercel.

The end of 2012 arrived and it was out with the old and in with the new, a ringed Falcon ousted the old female, would things change?…………

On Tuesday I got a chance to visit a wood in Kent, it’s a fabulous place, it’s private and rented by my Uncle and Cousin.
There’s all sorts of wildlife in there, I myself have seen Goshawk here, Common Buzzards are plentiful and my Aunt showed me a photo taken on a nocturnal snapshot camera, a Wild Boar no less.

It’s a fairly large Wood, adjoining a large Forest, having somewhere like this to yourself is a million miles away from my local Country Park and its shouting dog owners looking for lost dogs and dogs barking constantly.
At this time of year with some bird song, the peace and quiet is absolute in the wood, occasionally broken by a calling Fox or even a Deer.

Not surprisingly it is full of wildlife, Goldcrests and Coal Tits are plentiful, however my visit was due to a pair of Hobbies, juveniles and adults had been seen and not surprisingly heard.

Arriving with my uncle Steve around 7.00am the juveniles were soon heard and located, like most birds of prey the hunger call is universal and carries a long way.
I went off on my own tracking their movements by their calls, fledged and out of the nest I soon realised they were very mobile, lots of interacting as per peregrines juveniles, and seemingly due to the early hour, full of the joys of flight and practicing on each other.

I was never going to get really close as they moved around the tall Firs (they favoured these more so than broad leafs) but in the end I couldn’t complain with the shots that I got. 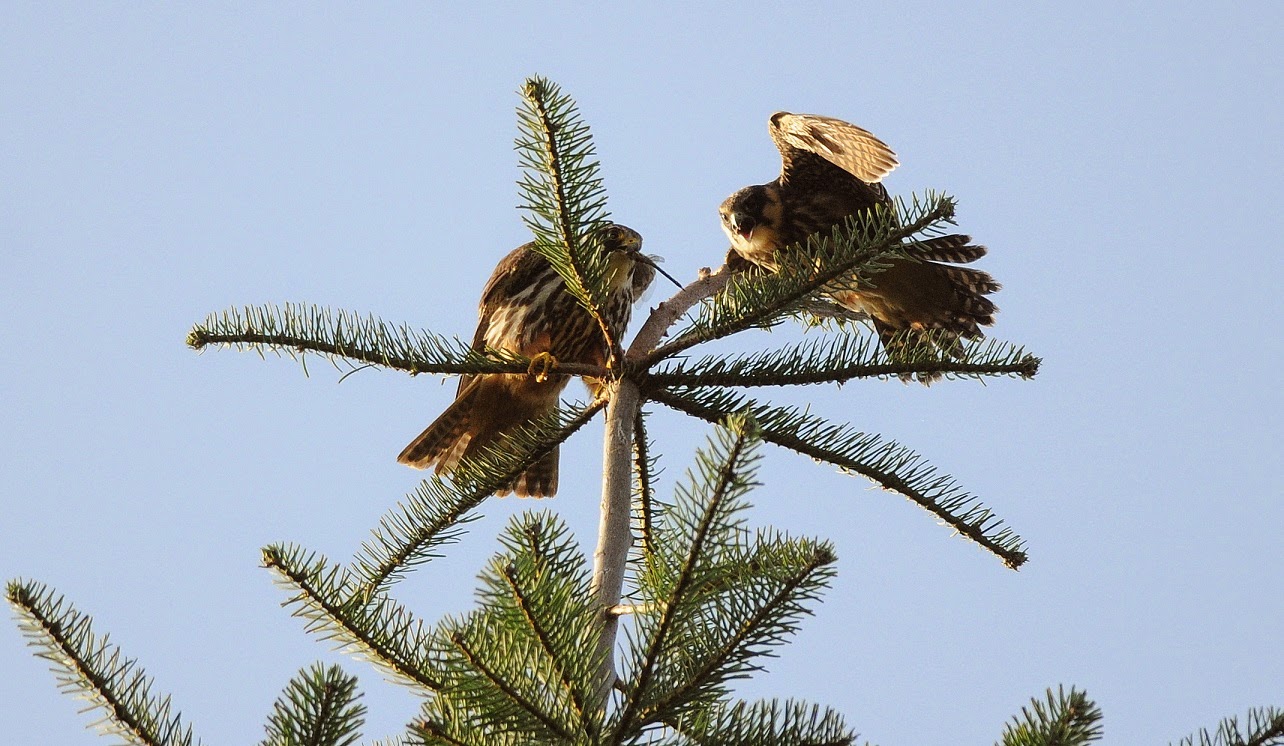 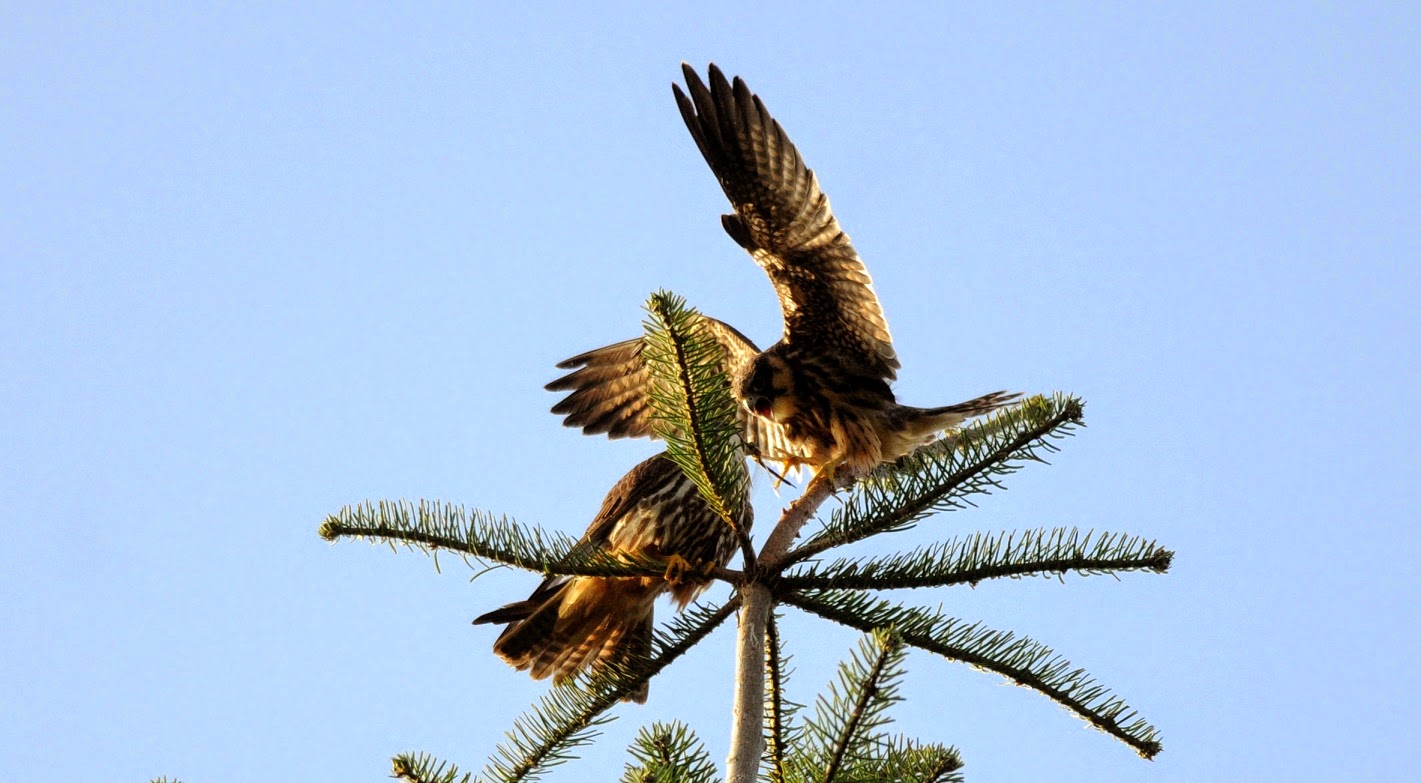 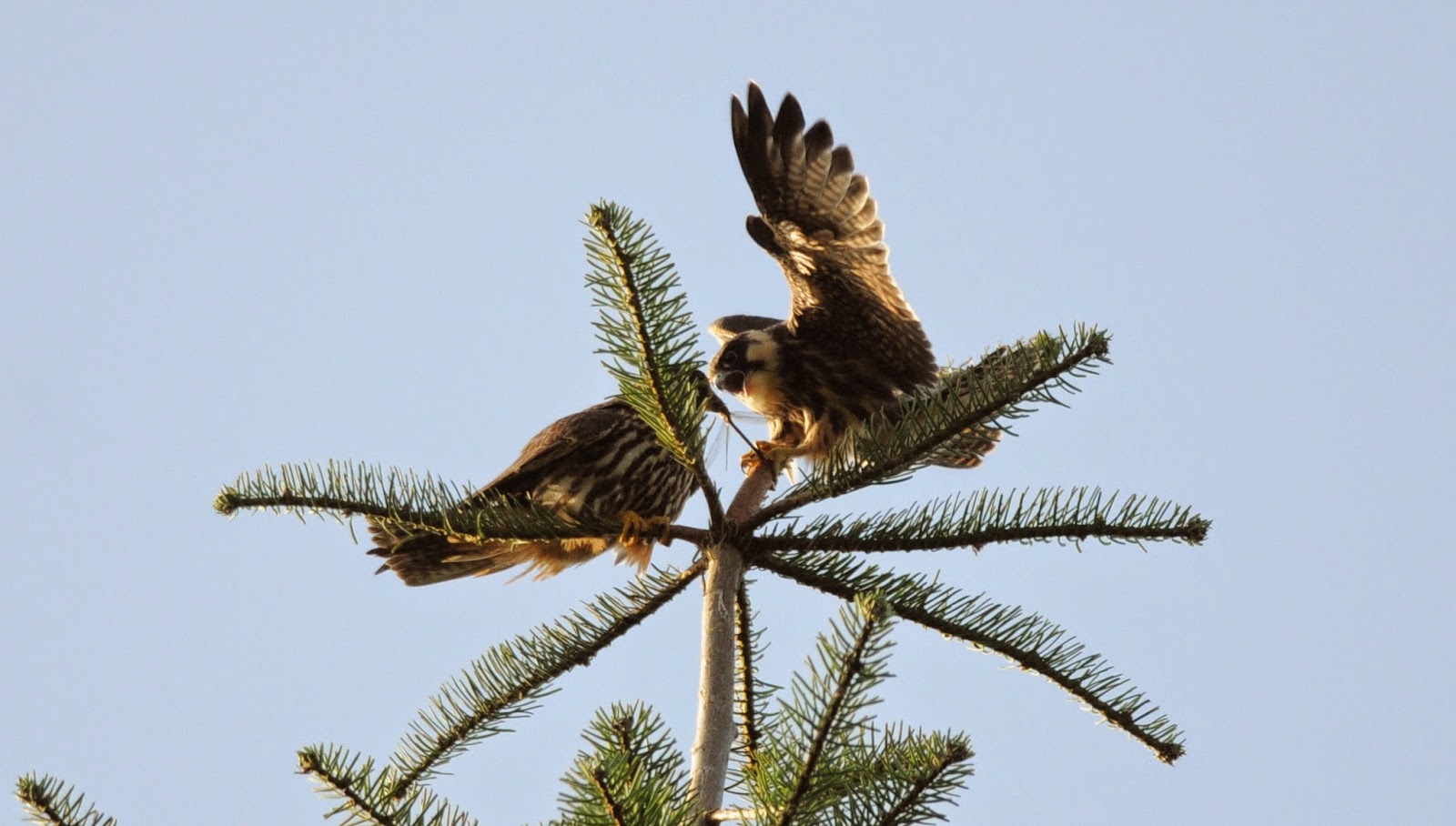 I worked out that there were 2 juveniles, I would suspect male and female and in watching the family most of the morning, it looked like prey was Migrant Hawkers most of the time going on size. 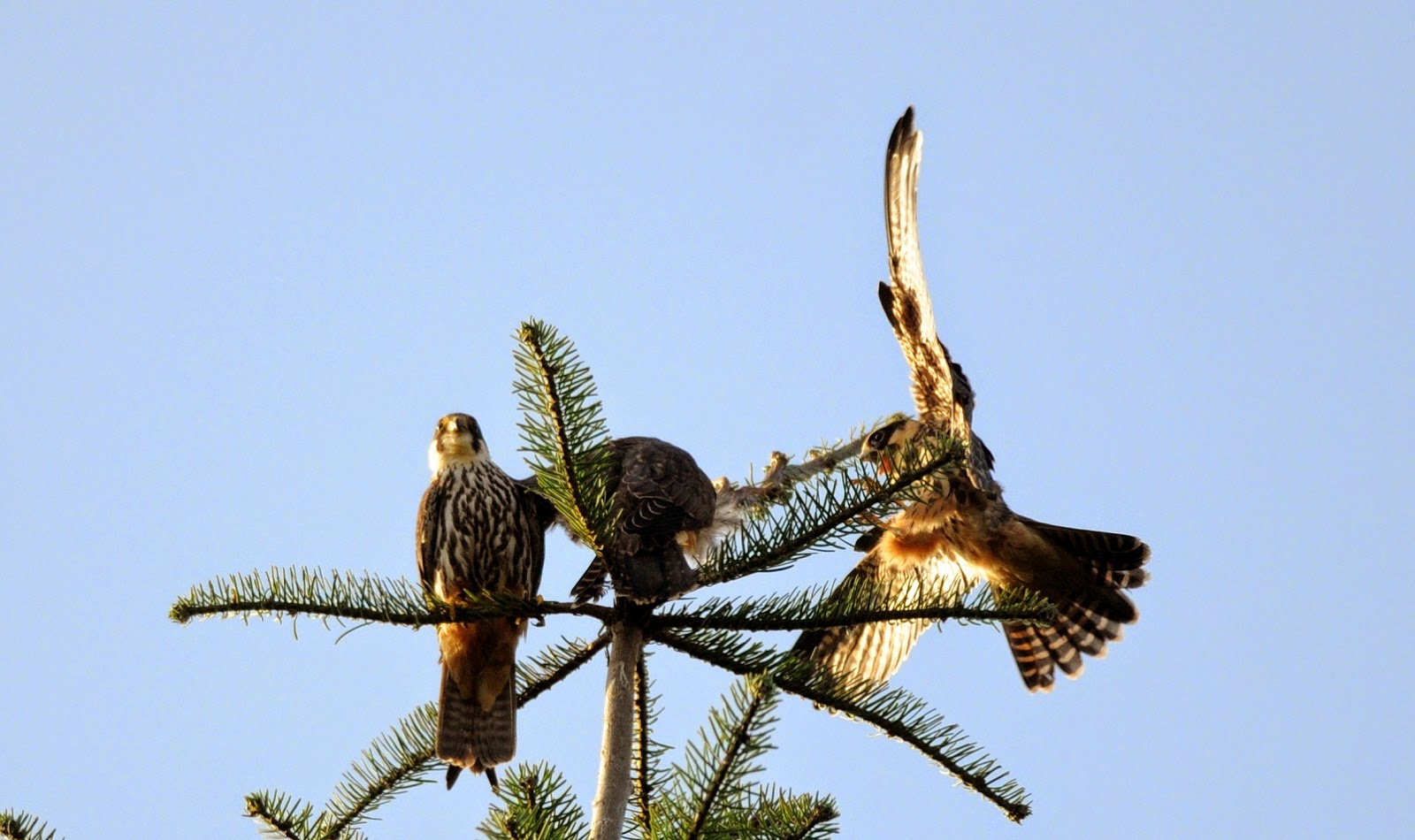 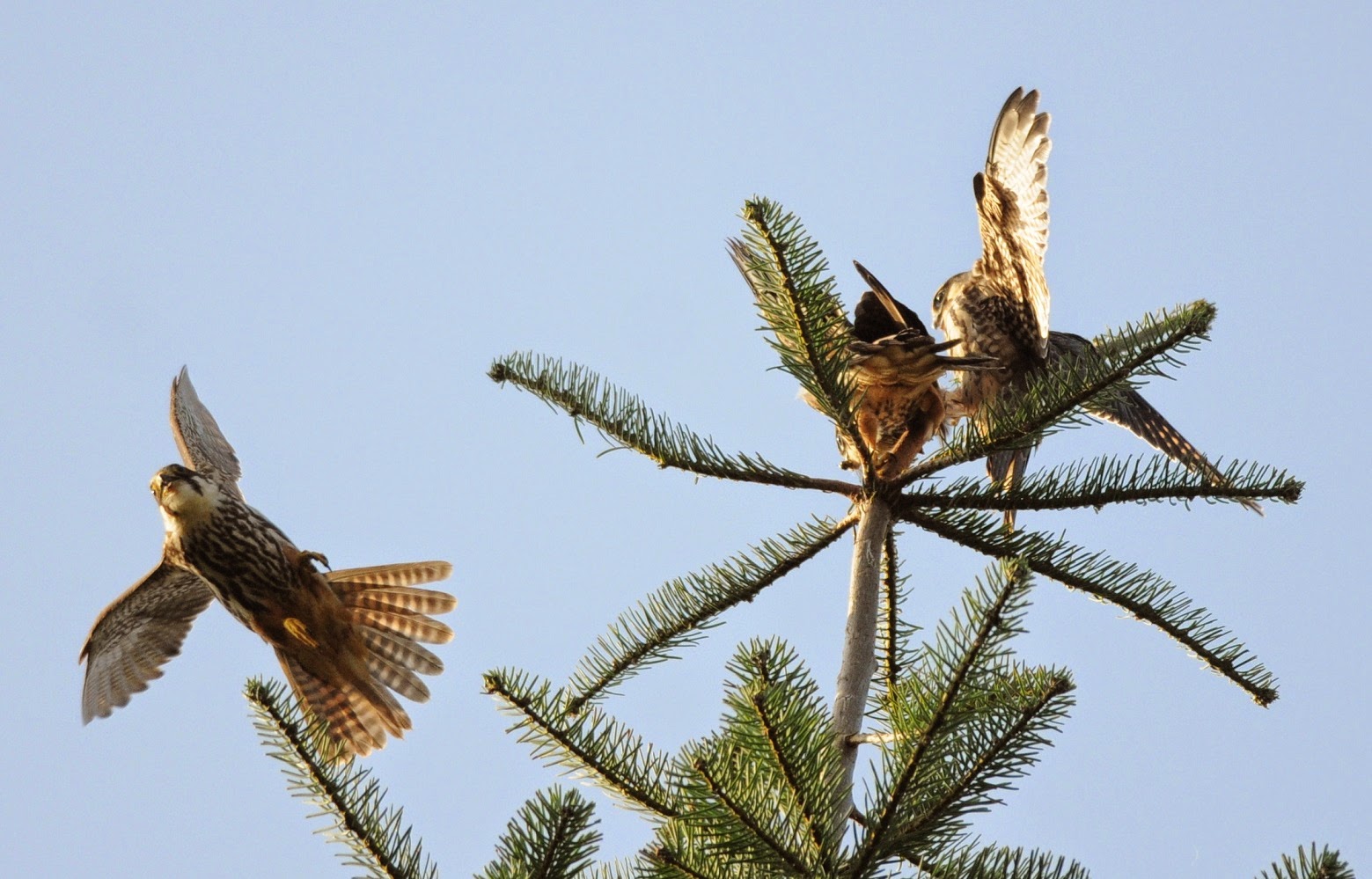 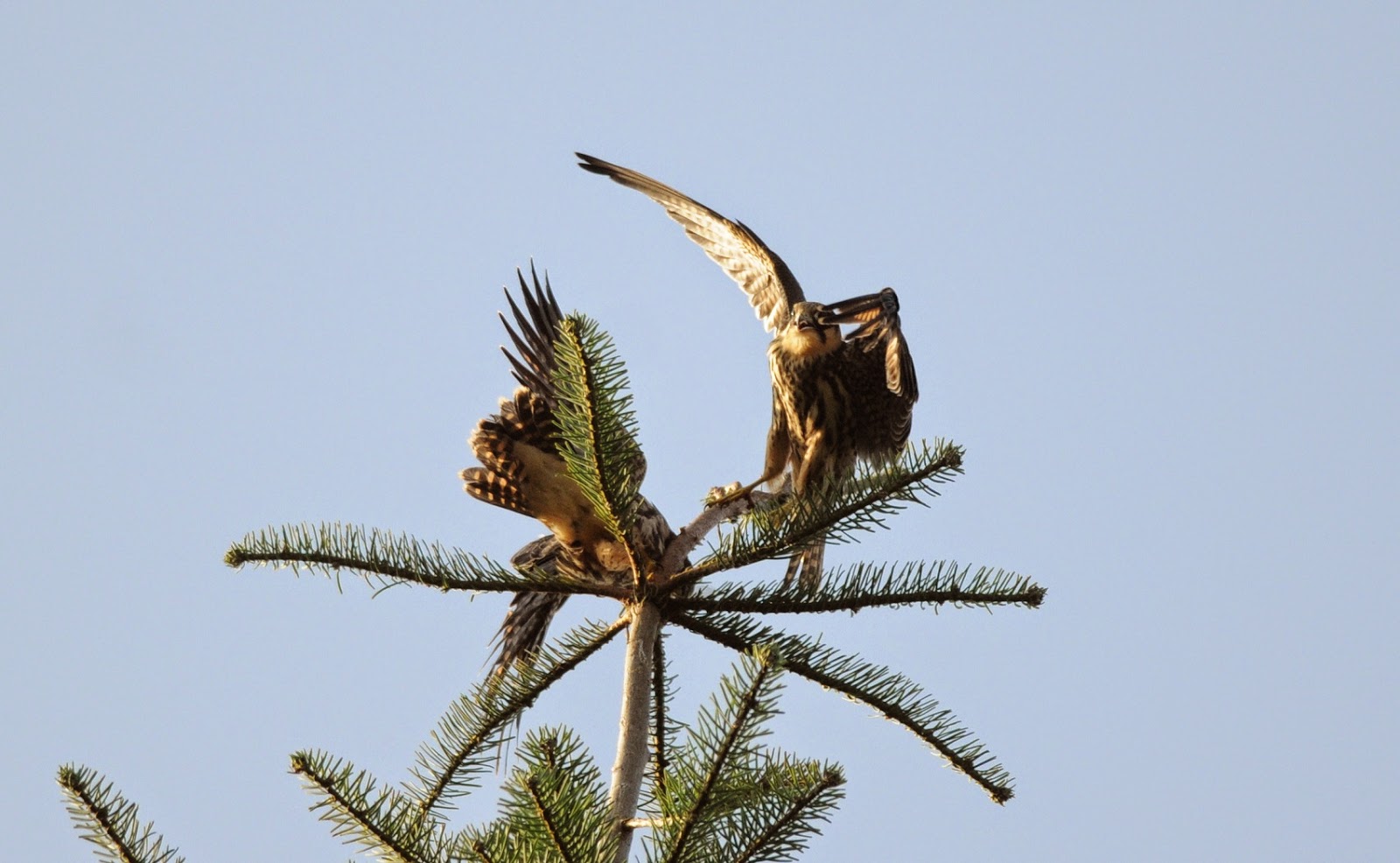 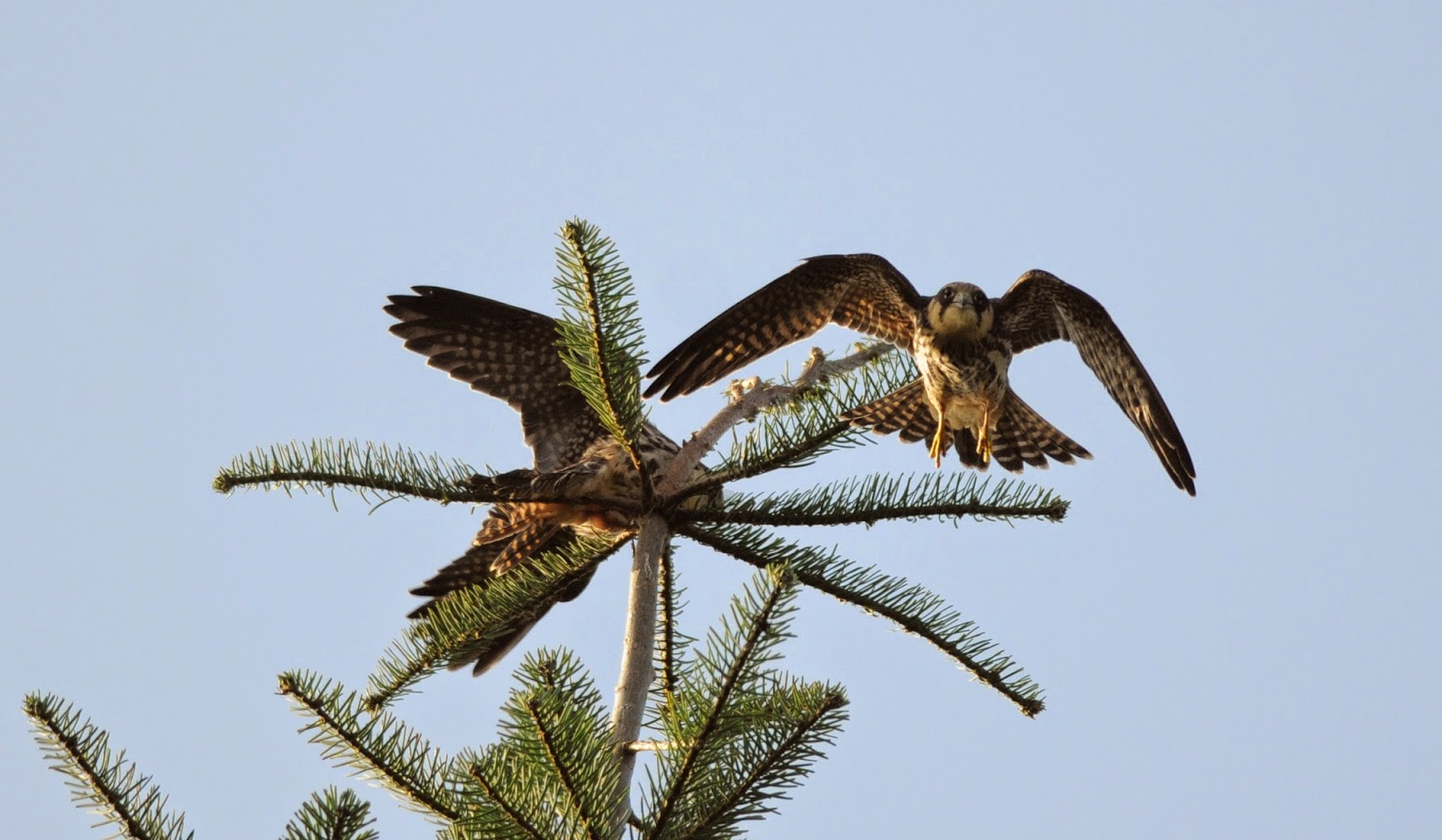 As the day grew warmer and the unseen thermals developed out came the Common Buzzards, 8 in total, all very high but all Commons, I was hoping for a Honey having seen one here 2 years ago. 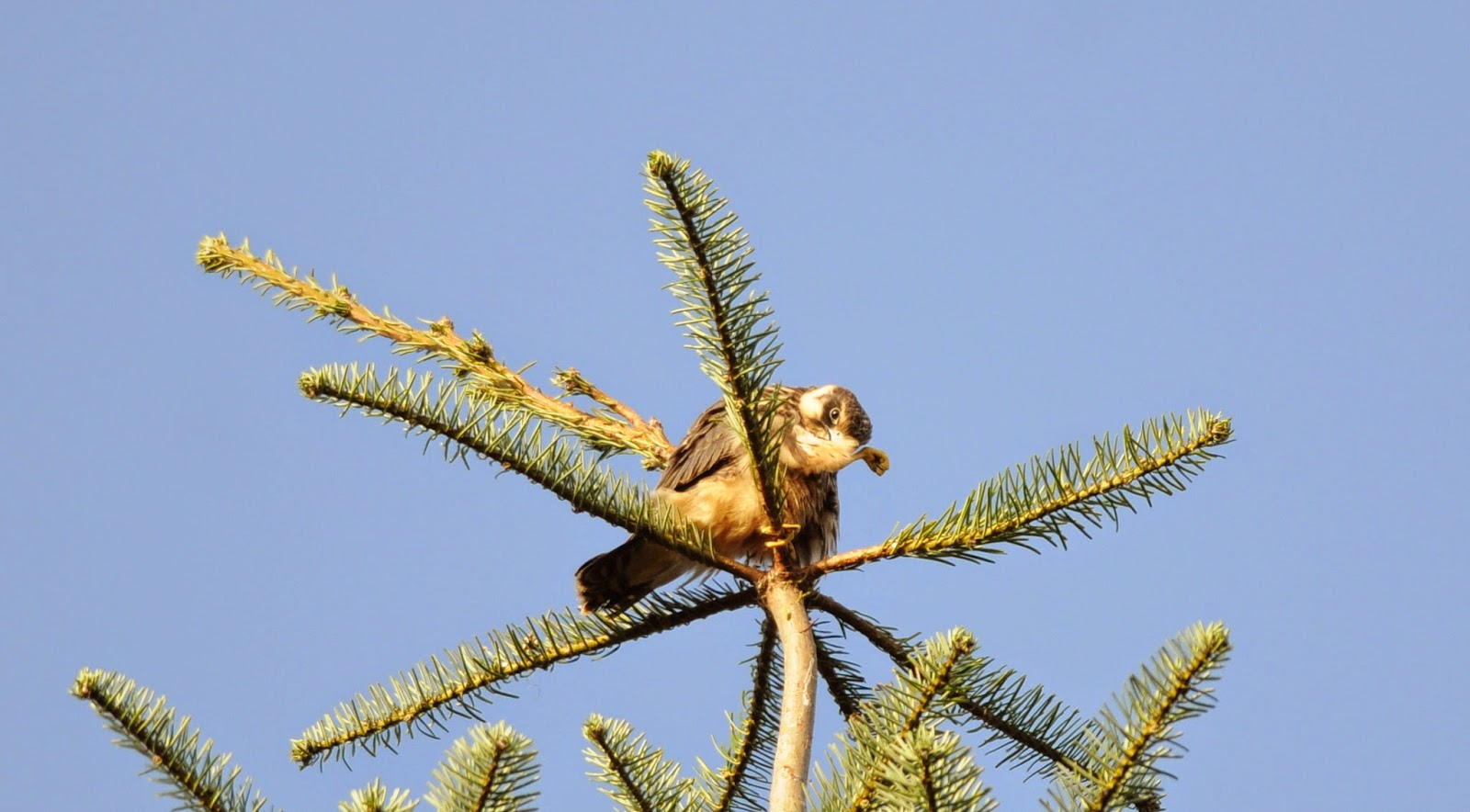 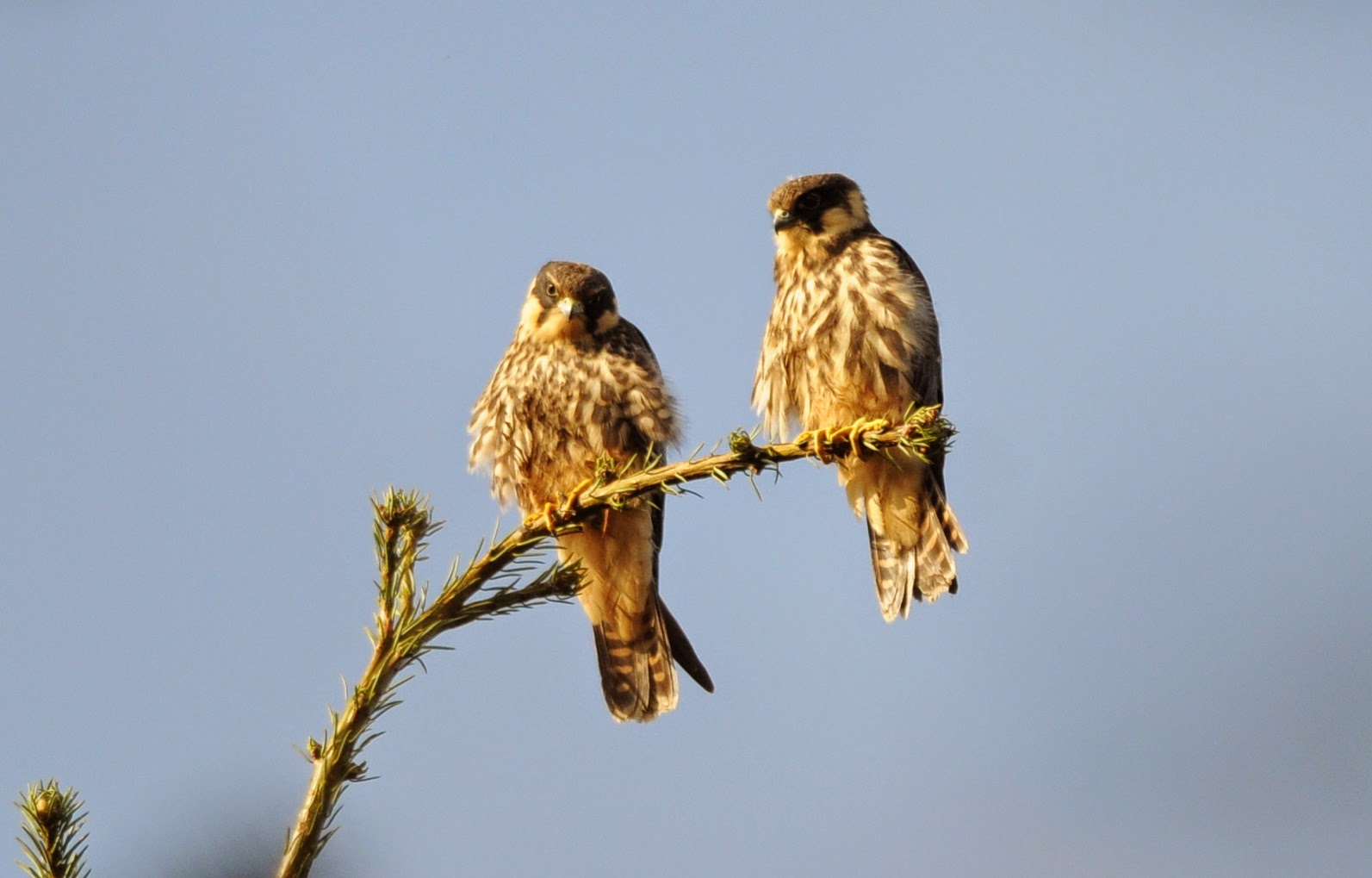 The last sight I got of the 2 juveniles Hobbies was way up, totally engrossed in each other tail chasing.

A very fitting end to the morning, next month they will likely be in Africa.

Posted by Dave Morrison at 15:10 No comments: