Tied up on other sites over the weekend so did not have a chance to visit Parliament, yet another pair has come to light, when I wonder will they reach there capacity in London?

It has been a good year for them, of the 9 sites that I monitor, many have produced fledged juveniles, in addition to this, Nathalies pair at Fulham&Barnes Peregrines successfully bred for the first time and fledged 3 juveniles.

As expected in Inner London, over 90% of prey is made up of Feral Pigeon, as you get out towards East London, many of the sites that I cover, you do begin to notice the difference in there appetites. I am now recording Ring Necked Parakeet regularly when I get the chance to visit nest sites once licensing restrictions are relaxed, this was recently the case at one particular site.


This site fledged 3 juveniles and whilst visiting the site for urgent works, the juveniles are flying now very strongly, I counted the remains of at least 7 Ring Necked Parakeets, this is mostly due to local abundance. The Peregrines are not having to go ‘looking’ for them, hunting takes place from the nest site structure as the Parakeets flyby. This site more than any other has the potential to turn up more varied species due to its geographical location, I am eagerly looking forward to collecting the prey at the end of August.


I was also sent a photo the other day from the same site, this had been windblown over the side and was obviously quite an old kill, on examination of the photo received, It looks good for a Red Legged Partridge. As there is little suitable habitat in this pairs territory for this species, they are hemmed in by other Peregrines on all sides, it raises the possibility that this could well be another pair hunting at night.


I intend to visit Parliament this weekend in the hope that the whole family have now established themselves around the House of Commons.

As with the best laid plans, unfortunately the Peregrines again never read the script, perfect weather dawned on the Friday for filming but a bit of a no show from the peregrines.

The idea was to try and get some hunting footage, birds bringing in prey, food passes if possible from adults to juveniles, of the juveniles, there was only the female present, the 2 remaining males were back at the nest site.


Both adults were roosting on Victoria Tower at dawn, both flew up river immediately, no doubt to check up on and feed the 2 males.

The 2 males are sticking together and are seemingly tied to the natal site far more than there sister, this is despite having been over to Parliament on more than one occasion. Last year all stayed over and were more or less present on every visit. 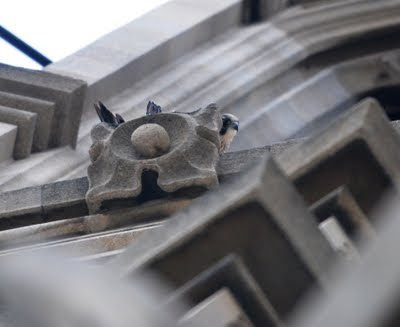 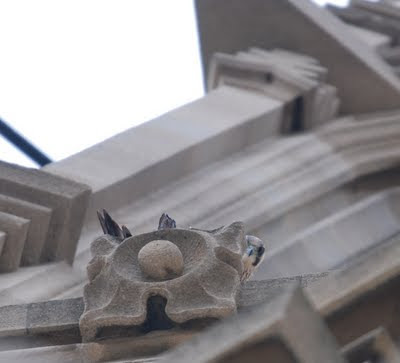 Males tend to like there own space as they tend to get dominated by there sisters in the food stakes, even at an early age, this may well be one reason that they are not making the jump to parliament and are sticking together. There could well be other reasons, the nest site is there home, why move when they are secure there?


It could be with there sister at Parliament most of the time, they may realize that they are more likely to be first when it comes to prey where they are, without there sister present. Easy to read human emotions into it, the simple reason could be that they just like the nestsite area more.

During the course of the morning, around 4 hours from dawn, only the juvenile female was present after the adults left, and her presence was only every now and then.

Just after dawn the 1st thing we heard was the calling of a juvenile from Victoria Tower, I was with Bertie Gregory, a young wildlife photographer who had arranged to photograph the birds from Parliament, again the 2 juvenile males stayed over at the natal site.

The 1st act of the adult Tiercel was to drive off an adult Lesser Black Backed Gull, as a rule, the adults usually ignore them at Parliament, with the juvenile present, different story.

Right from the start the weather started to turn foul, we did manage to get some shots of the juvenile and an adult but the light was very poor and not ideal.

Eventually the 2 male juveniles will come over, and I would expect them to stay, when, who knows? The only thing that may bring them over sooner is the adults, they are roosting on Victoria Tower, they may well hold to the Tower and hunt from it,the males will have to come over to be fed, hunger is a great motivator.
Posted by Dave Morrison at 08:06 No comments:

At last it looks as if they are back although there hunting habits and behavior of juveniles seem to be in contrast at the moment from last years juveniles. On both days, after early starts, the juveniles followed the adults no doubt on hunting expeditions further afield, possibly bought on by a lack of localized prey. Like most pairings, the Tiercels in particular have favoured hunting areas, if prey does not pass by in the immediate core area, in short, go looking for it.


From what I did see of the juveniles on Saturday and Sunday, all were flying strongly before disappearing following an adult. On Sunday I waited for quite a while after seeing the whole family embark on a hunting expedition, the juveniles fighting and playing amongst each other whilst striving to keep up with an adult. On Saturday it was likely they had killed further afield and were possibly laying up after feeding elsewhere, juveniles along with adults, unusual, as more often than not, they will lay up on Victoria Tower. 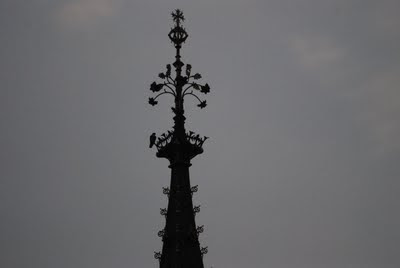 On Friday July 15th they are due to be filmed against the backdrop of Parliament, hopefully normal localized hunting will be the norm, the juveniles will put on a show like last year, and the weather will be good.

Good to see them back, quite a few people are already aware of them around Parliament, you might miss seeing them above, but you cant fail to hear them, great stuff!
Posted by Dave Morrison at 02:52 No comments:

Saturday July 2nd - where art thou?

I arrived at Parliament at 4.15am, the weather was perfect for a change, with this I was hoping that they were present and I could take advantage and get some good photos. As with the best laid plans, they had not read the script, and despite a thorough search up to 4.40am, it was quite obvious they were still at the nest site.

I decided to head that way to confirm and also being Saturday, I was hoping that I could find a spot away out of the public view, especially as many were just turning out of the nightclubs. At this time of morning many of the revelers are the worst for wear, and although mostly harmless, you do have to be a bit careful when you are carrying a lot of gear around London.

I eventually found the perfect spot down a private road with no public access which was a dead end, it gave me good views of the site.


I could hear the juveniles before I arrived, all food calling so it looked as if my timing looked good for some photography and to record some action. For my pains I had also ‘ set up ‘ just below a nesting Herring Gull, both adults gave me a hard time even though I was a good distance from there 2 curious juveniles.


It was apparent straight away that all the juveniles were flying strongly, eventually found the remaining 2 sitting on adjacent buildings. The adult Tiercel was hunting constantly, he killed twice, the Falcon once. Juveniles have sussed out that it is better to intercept the adult as it comes in with prey rather than wait and perhaps lose out to a brother or sister, hence some of the prey is being food passed. 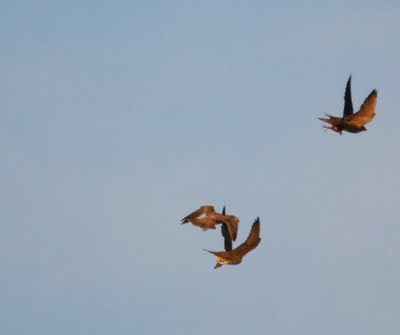 I suspect after watching them for a few hours that they will make the journey to Parliament pretty soon, there is now a few people waiting for them to arrive, including a film crew on Thursday, hopefully they will ‘ make the jump’.
Posted by Dave Morrison at 07:58 No comments: