What a morning, wall to wall sunshine from dawn so out early as per usual heading up town before they started lane closing for the London Marathon on Sunday.

First port of call was Battersea Power Station, where I am at last able to say we have a new female and furthermore she is incubating 4 eggs. The old female has, for a number of years become too old to breed and was infertile, they would go through the motions, pair bonding, ledge display, copulation and even incubation but unfortunately the end project was always negative sadly.
Given this and the Tiercel’s tendency to ‘flirt’ with other passing females I was surprised that the replacing of the female did not happen far earlier. I have observed enough intruding females to know that she was still too strong a bird and the pair bond despite the Tiercel’s roving eye was still very active.
Battersea Power Station Development Company have moved heaven and earth to accommodate the birds at great expense, and I will be working alongside them in keeping the peregrines on site throughout the construction period.

The latest arrival is a singing male Black Redstart, they are regular breeders, sometimes 2 broods, 2 separate foraging areas have been set aside for them by BPSDC,glad to say one is already in use.

From the Power Station, I then checked the Parliament pair, they are incubating as well, albeit on the same building but in a different area. Moving further east I checked on another pair, I observed the Falcon on this site incubating very early (see March 10th). As I observed her from distance it was quite obvious that she was sitting high with breast feathers fluffed out so there is every possibility that she may already have hatched an egg or 2.

Of the Hybrids there is no sign whatsoever; Crows have taken up residence of the area they occupied so it looks as if they have moved on as I can’t see either bird putting up with the presence of the Corvids.

Hopefully next weekend I will be able to confirm that the March 10th pairing do indeed already have young.

Posted by Dave Morrison at 20:48 No comments:

Back from New Zealand late afternoon on Saturday, a fantastic trip to see my family and am now starting to feel the jet lag, so if I waffle a little bit bear with me.

I was out at dawn on Sunday to check on the sites, very pleased to see that the nest box featured on February 2nd update has now been fully accepted and she is inside incubating. This is what makes it all very worthwhile and gives me a lot of satisfaction especially as this pair have failed a lot due to the weather.

Elsewhere other pairs are sitting tight and one in particular I fully expect to hatch early, they may even shade Nathalie’s Charring X birds for hatching dates.

On the Sunday I also looked for the hybrid pair, no luck but admittedly it was only a fleeting visit, I will put in more time this coming weekend.

Also, whilst visiting a site today where the resident Falcon is incubating, an intruding immature Falcon appeared and gave the resident Tiercel a very hard time for well over 20 minutes. Sometimes it looked as if he was really going for her in earnest, but in others he seemed not stressed at all. Paired Tiercel’s can be flirty so I suspect this was the case. Not last years Juv's either as these were ringed. 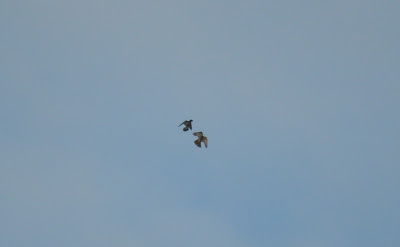 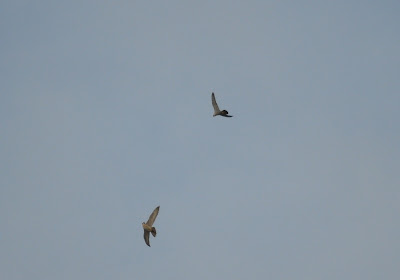 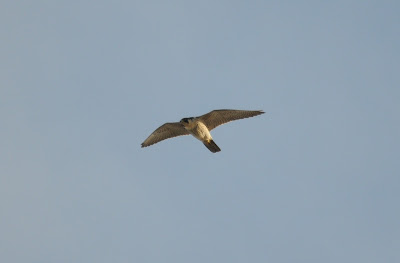 Posted by Dave Morrison at 15:45 No comments: