Looking Back, Persecution and Surveying


12 years ago I got the Peregrine bug, I was employed as a Steelfixer working on a construction site in Inner London and without being too dramatic, from that day I was hooked.
Most mornings on this site I kept noticing 1 or 2 birds at a distance soaring occasionally above a building or perched on or near it, I knew they were raptors being a birder, usually you would go straight for Kestrel or Sparrowhawk.But I was 100% sure on these being peregrines and so approached NaturalEngland, from that day as they say my birding world changed with most weekends and sometimes weekdays now taken up monitoring and assisting pairs in London.

They have become my main passion and taken over a large part of my life, my wife Christine puts up with me well, very well as I disappear in darkness for my regular dawn starts. It gives me a lot of pleasure to be able to give them a helping hand, in most cases a nest box but sometimes a tray, the end result for me in seeing successful breeding justifies all those dawn starts.

If like me you follow http://raptorpolitics.org.uk/ and
http://raptorpersecutionscotland.wordpress.com/
you will know that raptors, especially up north and Scotland are not faring as well as they should be, persecution in rural areas is regular. It is a disgrace that this happens in the modern era, you only have to look at the plight of the Hen Harrier in England, soon to be lost as a breeding bird unless they can reverse its fortunes.
Vicarious Liability is a step in the right direction, if a game keeper on a shooting estate is charged with a wildlife crime, the landowner also assumes the responsibility for the crime, in short he is nicked as well.It has to be stiffer sentences though or there will be no deterrent, a fine to a wealthy man is not enougth.
A recent case, see Raptor Persecution Scotland concerned the death of a Golden Eagle, have a look, read what happened first and then the Police response after, this is why the law as it stands is inadequate.

On a lighter note I have recently been surveying in both Kent and Essex, winter time for both counties is good for Birds of Prey, Marsh Harriers in particular have been rather obvious I am glad to say. Below are some photos from recent surveys, not great it has to be said, a combination of crap weather and my unwillingness to keep changing settings, some days I yearn for an auto. 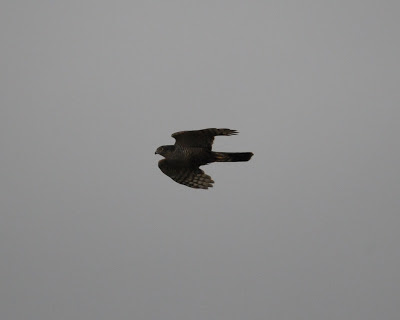 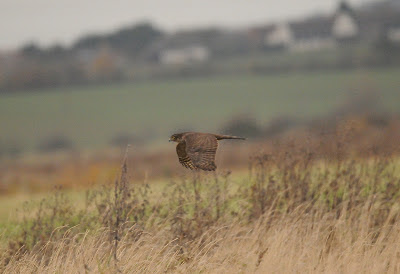 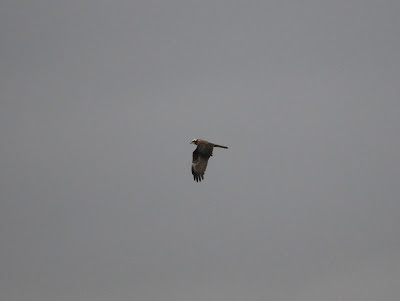 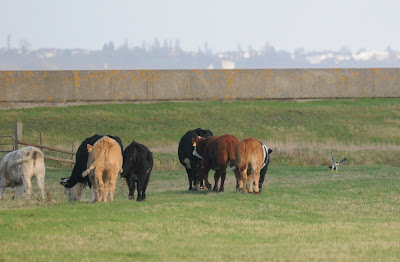 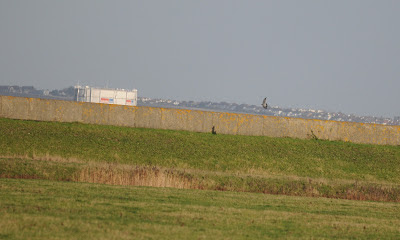 Posted by Dave Morrison at 01:44 No comments:


Up London as per usual at the crack of dawn on what looked like a very promising day, sunny skies had been forecast by the Met, it turned out that they were spot on as well.
I was visiting one of the regular sites which houses not only a pair of Peregrines but also a pair of Black Redstarts, rather surprisingly the Black Redstarts are not only present but are still paired and foraging together. I know that Stonechats for one retain the bond and pairing that sometimes runs right into winter but was not aware that Black Redstarts also did the same. At this particular site they have usually moved on by now with colder weather pushing them further afield to forage, being this late I do not expect them to be continental migrants. 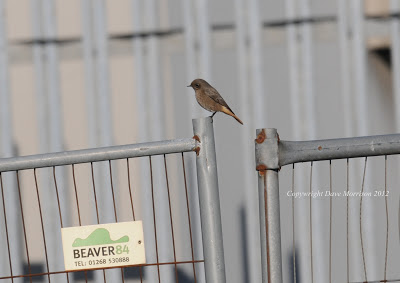 I was very lucky this morning with half decent light to get a few shots of firstly, theTiercel hunting, followed by the Falcon as well, at one point they pair hunted, spectacular stuff.
Twice they were interrupted by the presence of another Peregrine, both times a Tiercel and very likely the same bird, as expected he was seen off by the resident bird. On this site this is a regular occurrence, I would go as far to say daily, having once watched this particular site every day over an 8 day period. During this period the resident pair received visits by other peregrines 7 out of the 8 days. 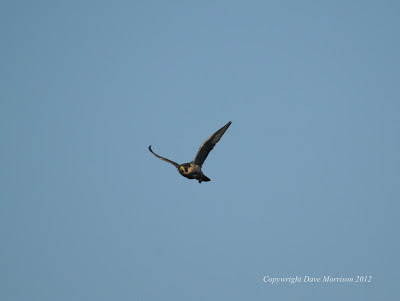 One thing that I have noted during hunting forays, on this site, is that in brighter weather the success rate for taking prey seems to be lower, the obvious reason I suppose will be that the prey, be it Feral Pigeon, Starling or Ring Necked Parakeet evade them far easier as they see them earlier. 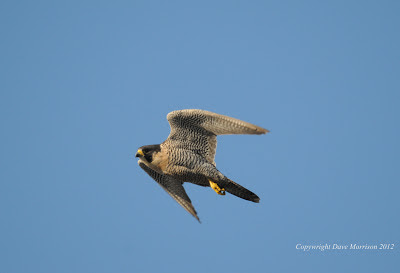 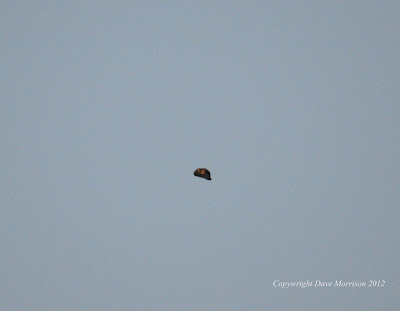 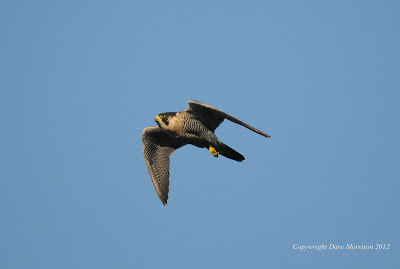 The breeding season is again approaching very fast, in the coming months I have more nest boxes to make, 3 full sizes boxes and a tray, fingers crossed that they will be accepted, nothing gives me greater pleasure.

Posted by Dave Morrison at 23:41 No comments:

With a forecast living up to its prediction I visited Parliament in the morning in constant rain, in truth I was not expecting much, and so it turned out, I didn’t even see a Peregrine. They were obviously more sensible than me and had no doubt retired to a dry covered ledge somewhere; they were certainly not on Victoria Tower.

Halfway through the search for them I walked around to Westminster Abbey and came up short as I entered the lawned area in front of the Abbey.
A sea of crosses, literally thousands, were laid out representing people of the Forces and many regiments of unknown soldiers who lost their lives in both wars and other conflicts.
I was on my own as it was just past dawn, standing there you realise what a massive debt of gratitude you owe to each and every one of these people for keeping our country free of oppression, but for them we would not be here would we? 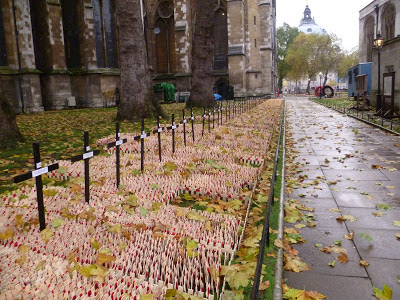 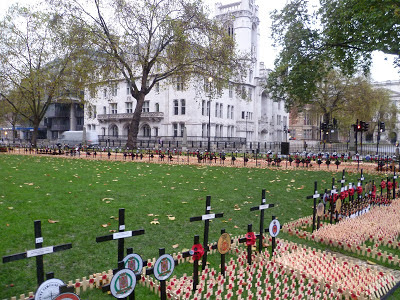 You cannot fail to be moved by the sight of all those crosses for Remembrance Sunday and what they signify, sadly a life lost.

Posted by Dave Morrison at 06:35 No comments:


With Christmas fast approaching thoughts are again turning to breeding on the established sites, this involves getting nest boxes/trays cleant out and substrate replaced.
With the peregrines licencing period starting as early as February, I usually get all the sites ready in January as they start pair bonding as early as February, like most things much depends on the weather.

Peregrines are not house proud; as the boxes have a roof they are not ‘naturally’ flushed out by winter storms and extreme weather. Juveniles ‘guanoing’ and prey remains inside the box means that all boxes, if accessible have to be clean out. If not it encourages parasites in, I try to leave it as late as possible just in case they are stashing prey in the box. 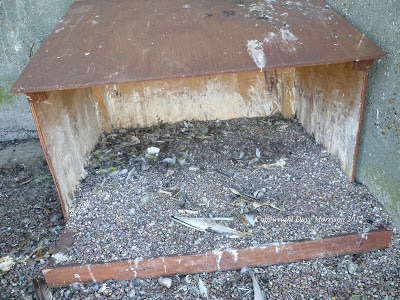 This year 14 juvenile’s carry an orange ring for London on their left leg along with the standard BTO ring on the right. So far this year there have not been any sightings as far as I am aware of the juveniles, the rings can be hard to see but I had hoped with this number, sightings would have occurred.

Where do they go?
Will they leave London?
How far will they travel out of London?
As there natal sites are urban areas, will they automatically seek other urban and not rural areas?

A lot of questions and not helped by the fact that other City’s/Towns are also using orange in England, plans are now afoot in 2013 for London to have its own colour range.

Lack of sighting returns so far is likely down to the fact that peregrines have relatively short legs and ‘feathered trousers’, when perched they are not always on view. Additionally 1st winter mortality rate is around 30%, some will not make it, much depends on how efficient they are at hunting and the lessons learned from the adults.
Having said that, I believe the percentage figure has to be lower in London, if they stay, due to the shear density of prey, Feral Pigeons and Starlings etc.

Hopefully some will show up over the winter and in 2013, my hope is that ringed Tiercels and Falcons will eventually pair up from different sites, and in the near future eventually breed.

Update
The Falcon still remains on her own after the Tiercel was killed on September 7th (see Casualty of the Chase) as yet no sign of another Tiercel; I am hoping that one of the ringed Tiercels will find her.

Posted by Dave Morrison at 01:45 No comments: